Next Thursday sees the 50th anniversary of the New Zealand Music Awards at Vector Arena, where there will be the usual scenes of pop performances on stage and screen and, um, spirited behaviour away from the cameras. But the story of where the awards came from and their journey to Vector is quite an interesting one.

Simon Grigg has compiled a fascinating and richly-illustrated Audioculture history of the first awards – the Loxene Golden Disc – and how they came to be bankrolled by a British anti-dandruff shampoo. 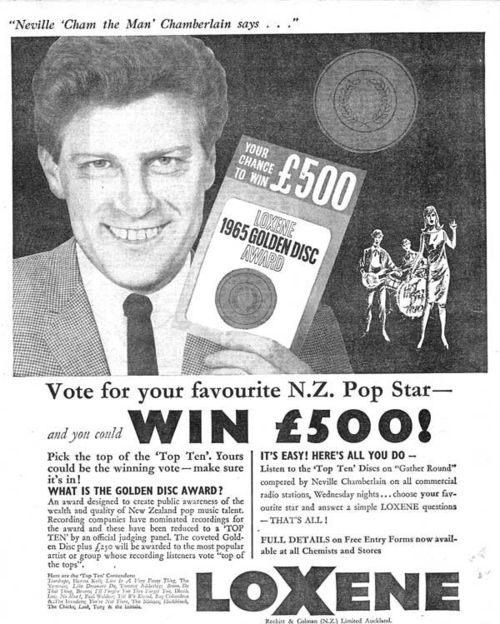 As Simon notes, the lucky voter received twice as much in prize money as the actual Golden Disc winner.

The rise of the album and the evolution of our pop music away from its light-entertainment roots and made the Golden Disc look out of its time by 1972 (it was succeeded in 1973 by the RATA Awards) but for in the 1960s, our first music award was the biggest thing on the music calendar. We had this album in our house ... 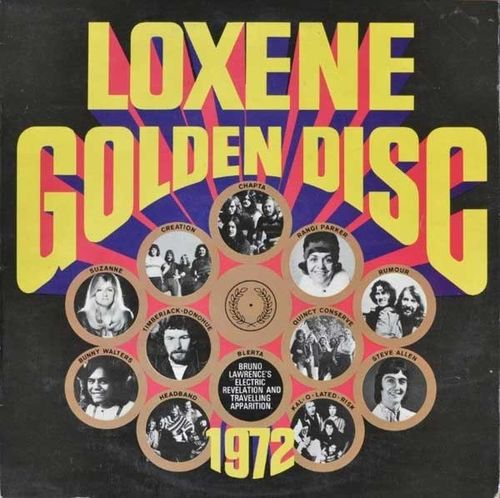 There's also a gallery of covers and trophies (including the infamous "Perspex Swirl", which actually broke before some recipients managed to get off the stage).

A rundown of 50 years of Best Singles.

And photographs of a whole bunch of people socialising over the years.

One more on the history tip: RNZ has re-upped Andrew Dubber's 2002 Music Chairs interview with Barry Jenkin, who reveals he was "born with perfect pitch". But ... is the first voice we hear there that of Mike Hosking?

Splore has revealed that its Saturday night headliner is ... Leftfield!

The one-time duo is now Neil Barnes' solo project, but the new album, Alternative Light Source is getting great reviews and the live show is, as indicated by this video, unadulterated rave.

This is good: Shihad's Phil Knight has created a kind of Nutters Club for musicans, in the form of a podcast caled What's Phil Worried About Today?, in which he talks to his peers about mental health issues and experiences. The Australian site Tone Deaf has a story about it.

While you're scanning JB Hi-Fi ads for your next pair of shitty earbuds: Gizmodo's write up on Sennheiser's absurd $55,000 Orpheus headphones. Which apparently sound amazing.

If the essence of New Orleans music could be summed up in one human, that person would be producer, arranger, songwriter and performer Allen Toussaint, who died this week. I'm no expert on his work, but Danielle has directed me to this rich Times-Picayune obituary:

Despite international renown, Mr. Toussaint was a regular sight in the Mid-City and Gentilly neighborhoods in years past. He was known for his stately posture, unhurried speech, elegant suits, sandals with socks, and a Rolls Royce marked with license plates that read "Piano" and "Tunes."

"He was his own living art form, the way he dressed, like somebody from another era, century, always had some incredible combination of jacket and shirt and tie," Davis said of Mr. Toussaint's personal style. "Always. He was a living piece of art. The tie and the shirt was a poem every time."

She also recomends 'I Feel Good', written under the pseudonym Naomi Neville ...

And subsequently covered to great effect by New Zealand's own Larry's Rebels.

The song was later covered again by Citizen Band. But I discovered this week that there is a third New Zealand cover – by Golden Harvest! They did it as the b-side of their 1976 single 'Come Together' and I really want to hear it.

But back to Allen Toussaint, and Danielle says "I think it's important we know he wrote Lee Dorsey's much-sampled Everything I Do Gohn Be Funky'":

"Plus," says Danielle, "his original 'Southern Nights' is rather a far, psychedelic cry from Glen Campbell's remake":

HOLD UP THERE. Danielle has come further to the party with a pointer to this downloadable Allen Toussaint mix, which is amazing.

Lurching back into the present, Red Bull commission Martyn Pepperell to produce some new video profiles. Most recently, Jordan Arts, aka High Hoops:

And a couple of weeks ago, Eddie Johnston, aka (in this case) Race Banyon:

Street Chant's Emily Littler did quite a bit of solo work as Emily Edrosa while the band was in recess and it's sticking around. The Emily Edrosa EP has been pressed to vinyl by Australia's Fluff Records and now there's a video for the standout song on the EP, 'Corner of the Party'. It's the creation of New Zealand Instagram star Ra Pomare, aka DJ Mall Sushi (story here):

And finally, Marlon Williams has released a strange, striking, dreamlike video for 'Hello Miss Lonesome', in which he gets both beaten up and fully naked (story here):

Zac Arnold has assembled a remarkably eclectic bill for his celebration of of New Zealand psychedelic sounds, NZ Psych Fest, which happens at Whammy bar on December 4 and 5. The lineup runs from Critics' Choice winners Bespin to Dunedin's moody electronic artists Death and the Maiden and Auckland sound experimentaist Christoph el' Truento.

I love this summery, jazzy shuffle from Auckland's A Band called Success:

Simon Flower has done a lovely remix for Introverted Dancefloor (aka Bevan Smith, the man behind Signer and Aspen). The backstory is here:

Wellington's Unmap has an EP of spacious, soul-inflected electronic music out for ya:

And finally, Leftside Wobble is giving away this very cool remix of Leon Sweet's 'Sunny Bigler', from the new Paper Records remix EP. Get in there for the free download!