As I've noted before, my suburb is on the edge of the largest roading project to be undertaken in New Zealand. Overall, I'm in favour of the Waterview Connection. It does make sense to provide redundancy in Auckland motorway network and I won't mind getting to the airport quickly either. But I'm a lot less sure about some of the changes around the project.

One of the joys of living in Auckland's inner suburbs is the presence of mature trees. Most years, the stand of big pohutukawa trees that faces Western Springs Park comes (metaphorically) alight with bright red blossoms. But as a result of upgrades related to Waterview, some of those mighty trees may be for the chop. There's a petition to stop it.

Now, these are the trees to the east of the St Lukes overbridge, and I'm a little less attached to them than to the main stand of pohutukawa on the other side. I could accept the loss of a few trees if it contributed to the redevelopment of a space that provided access to key Auckland Council recreational facilities: the stadium, the museum and the park. As things stand, that stretch of road is already closed to accommodate crowds and special buses at major stadium events.

But the last we heard, Auckland Transport's proposal doesn't seem to do any of that. As Transport Blog noted in February, the plan would remove "some of the few bits of existing pedestrian priority that currently exist" at the shitty T-intersection that gets cars to the motorway onramp (which will in turn be the main way for locals to get to the Waterview Connection) -- and is supposed to get cyclists and walkers over to the much-valued northwestern cycle and walkway on the other side of the motorway.

This before-and-after from Transport Blog illustrates the problem well. In the plan shown, three pedestrian crossings come down to one.  The signalled crossing on the city side of the intersection is gone altogether, meaning it's not possible to cross the road on foot on that side at all.

There are some blessings. Shared paths for walkers and cyclists on both sides of the new overbridge. The plan calls for a cycle lane heading west on Great North Road towards the intersection, at last. No more crapshoot for cyclists trying to find their lane. Well, actually, there will be. Cyclists will still have to get across a busy left-turning slip lane in order to proceed straight ahead.

That was all in February. What's up now?

I had a chat today with Graeme Easte, the transport spokesman on our local board, Eden Albert (amusingly, the controversial intersection is also a ward bounadry, meaning that the city side is covered by the Waitemata board).

• Work has begun on the motorway elements of the upgrade, which has been contracted to the Australian company Leighton. That's the widening of the motorway between St Lukes and Carrington Roads and the construction of the new, wider St Lukes Road overbridge. That will take about two years.

• The intersection has been hived off as a separate piece and key decisions are still open.

• The trees could stay. The main problem is that the plans call for Great North Road to be raised 1.5m at the intersection, to ease the transition to the new bridge. That puts traffic turning left over the bridge from Great North Road in potential collision witgh the lower branches of the trees. It may be possible leave the trees and simply remove the lower branches. That's under debate -- some proposals save the trees, some don't. Treehuggers should consider the branch-removal options, I think.

• The problem for westbound cyclists forced to cut across the slip lane has been acknowledged and there is discussion of where -- ie how far away -- from the intersection, through-travelling cyclists should be brought across to the right side of the left-turning traffic. Cycle advocates want it to be sooner, roading engineers probably insist that's too hard.

• Graeme says a pedestrian overpass -- favoured by some Transport Blog readers -- won't happen, because it wouldbe unwieldly and, on overseas evidence, poorly used in real life.

• There may yet be a cycle lane citybound past Motat. This seems worth campaigning for. Ditto for the next stretch, from the stadium access road to the Bullock Track. Even as a confident cyclist, I find it difficult sometimes to take my lane to head up Chinaman's Hill when there are vehicles coming from behind and then across me to get to the bottom of the Bullock Track. Again, it's a situation where cyclists are faced with difficulty and danger just to ride straight ahead on a damn road.

So, short version: plenty up for grabs. It's worth communicating with the council, Auckland Transport and the two local boards involved, Eden-Albert and Waitemata. Be nice. They're decent folk.

I also asked Graeme about our other route from Point Chev to the city, Meola Road. Meola does more jobs than one road should. It's a vehicle transit road at rush hour and the weekends, it's on the route of the Outer Link bus and it's a quiet night-time back road home to the Chev. On Saturday mornings it turns into a luxury SUV convention, with wealthy parents parked up both sides for kiddy football on the new all-weather pitches at Seddon Fields. (I've taken to driving the long way rather than navigating it on the Saturday morning breakfast bagel run to Grey Lynn. Not only is the parked-up road very narrow, kids run across it from behind parked cars. It's a little too high-stakes for my liking). And it's a popular cycling route.

But my beef with it isn't those things. It's the short, disgraceful stretch up the hill to the roundabout on Garnet Road. The same stretch has just had nice, bright new concrete footpaths built, which only highligts the state of the road itself. While the most of Meola is smooth asphalt and has been repeatedly resurfaced, the bad stretch is heavy chip that never, ever gets fixed.

There are two problems with that. One is the vehicle noise the heavy-chip surface generates. The other is that both the chip and the busted surface make it really hard for cyclists.

Examples. On the right, asphalt. On the left, crap. 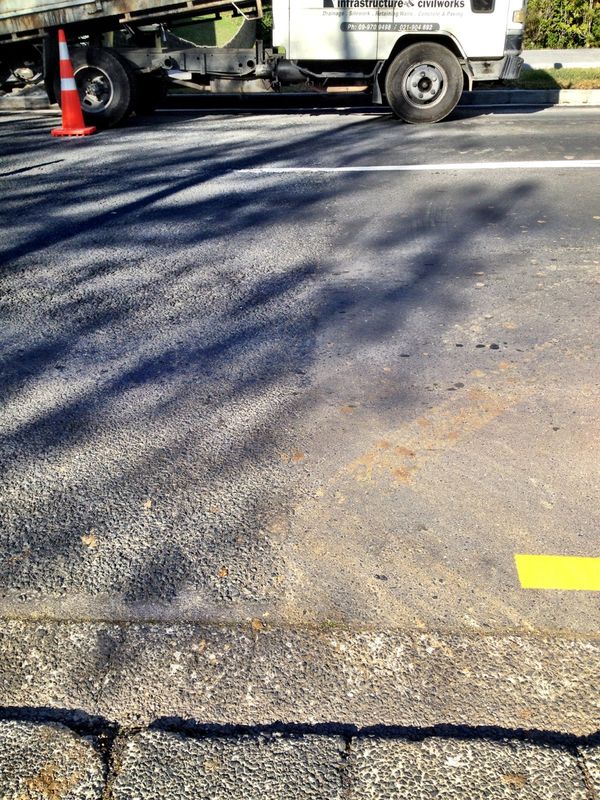 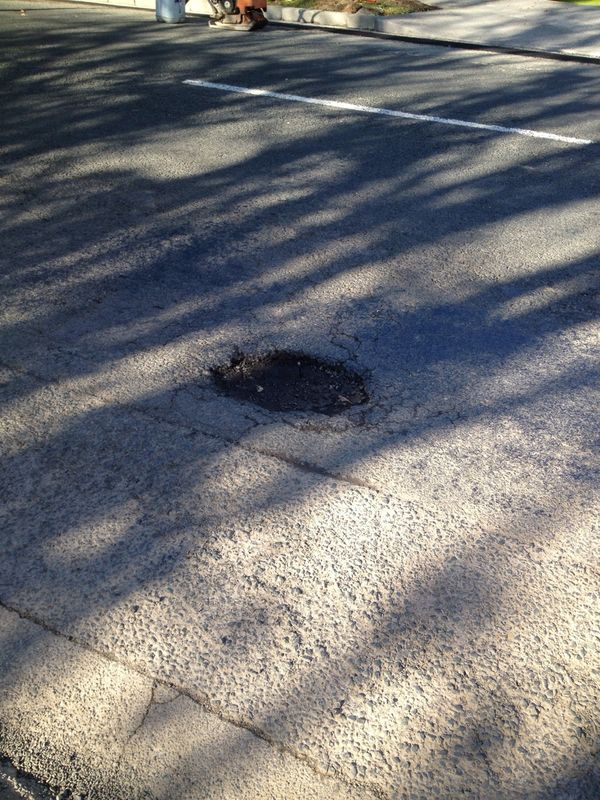 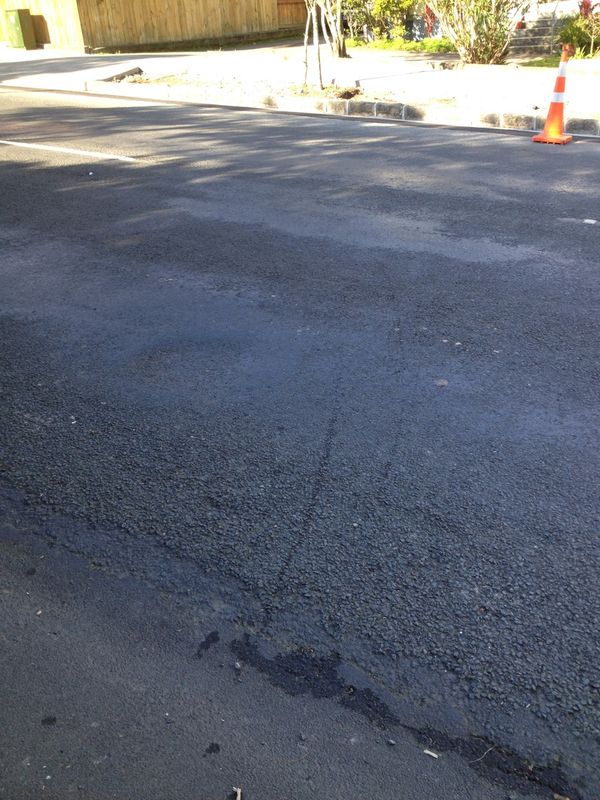 And back to asphalt for the roundabout. Yes, those are old blobs of concrete just dropped and left there to harden in the cyclists' lane. It's rubbish, it really is. 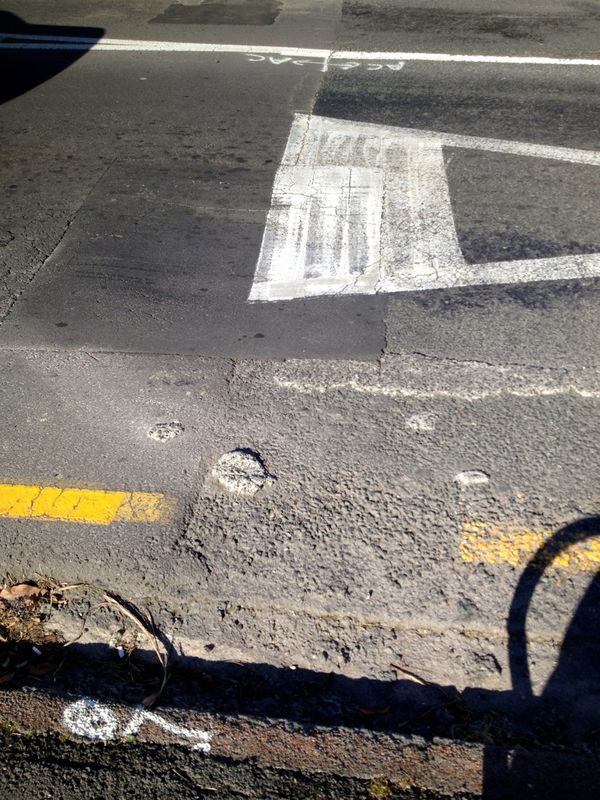 Years ago, I recall, the whole road was done in new heavy chip, to the great dismay of residents -- the traffic noise was incredible. A council about-face quickly saw the flat part resurfaced in asphalt. After talking to Graeme, I think the issue may be that in order to bear asphalt, the incline needs to be rebuilt rather than simply resurfaced. So the slope stayed in chip -- and thereafter seems to have fallen into a kind of twilight zone, where it's on no one's upgrade schedule.

Auckland Transport, there are many things I'd like you to do with Meola Road, including good shared paths (there's heaps of room). But mostly, I'd like that bad stretch upgraded to something commensurate with the use to which Aucklanders put it. C'mon.