As you will be well aware if you live in Christchurch and have tried to leave the house within the last 24 hours, we are in the midst of our third serious flooding incident this year.

The natural risk for Christchurch has always been flooding - we are a low lying urban area in the middle of a flood plain. However, the quakes have obviously overshadowed the flood risks in the last few years. Now, the terrible repeat incidents, especially in the Flockton Cluster (which has, like liquefaction, EQC and TC3, quickly slotted into the post-quake vocabulary of the city) have brought the issues to the surface.

It is not only in Flockton, but also the low-lying areas of the Avon and the Heathcote rivers. My parents have lived at the same property in Hoon Hay / Halswell since the mid 70's, and they have never seen flooding like the one they had last year. While they haven't had the same surface water as in St Albans, their property is damper than I can ever remember it being.

The quakes have compounded the issues; they have changed the ground levels, lower in some places, higher in others, as well as raising the river beds and filling the waterways up with silt. This has meant that the drainage network across wider Christchurch is as broken as our CBD is. The council needs to address this issue, but it is a complex one, and seems to be beyond their capacity at this point. Labour's Earthquake Recovery spokesperson has acknowledged this yesterday:

It has to be a priority for the Council to now act over some of the suggestions that ratepayers and citizens have made over the past month in public meetings. So far the Council has not come back with any feedback on these suggestions.

There is also an interesting suggestion from Green MP Eugenie Sage, who would like to see a "blue zone". This is probably a more long-term solution that would require intervention from the government. Before taking this step, it would be worth ensuring that all efforts to fixed the drainage of the area have be pursued.

Trying to resolve the situation in Flockton by improving the drainage would be a better option, as it would allow people to stay in their own homes. It may also be a cheaper option for the council or the government than having to extend the residential buy out programme. These two response show that what Christchurch needs are both short-term and long-term fixes.

Last night, Paul Henry went on an extraordinary rant, placing all of the blame squarely at the sodden gumboots of Lianne Dalziel. Paul Henry knows about as much about the flooding situation in Christchurch as he does about race relations in India - i.e. nothing.  I've never watched his show before, but was prompted by this rant. It's as though he thinks he is a "man of the people" like stablemate John Campbell, except instead of standing up for the little guy, he's pushing the line for the big guy - his mate, the Prime Minister. It is Danyl McLauchlan's description of how the PM's office feeds the bottom-feeder blogs, except on a grand scale.

He judiciously cuts together footage to serve his narrative, rather than the truth. When Lianne says that she is dividing the task force into two, he screams "what does that even mean?" Well, Paul, as the presenter on what is theoretically a news show, maybe you could have done some research. But in lieu of that, I'll explain it.

The task force has been divided into two teams, one to look at the short term solution, and one to look at the long term resolution. We need both. We can't have people going through this again, so we have to find a short term solution. But we also need to know whether this situation can be mitigated, by improving the drainage, raising the houses, or partial red-zoning. This takes more investigation, and has more serious implications for people's primary asset, their homes. It makes sense to take some time with this.

When Campbell Live caught the PM, he was at the Court Theatre, where he had been attending the announcement of the final allocation of funds from the Christchurch Earthquake Recovery Trust. This was the fund that got almost $100m of donations from around the country in the wake of the the quakes. The biggest of the final payouts was to the Christchurch Symphony Orchestra - worthy, perhaps, but certainly not doing much to help the people with 20cm of water in their living room - if they even have a living room.

Of course the real reason Key was in Canterbury was to deal with the most pressing water issue facing the community. No, not the flooding in the city, but turning the first sod on the controversial Central Plains Water Scheme. 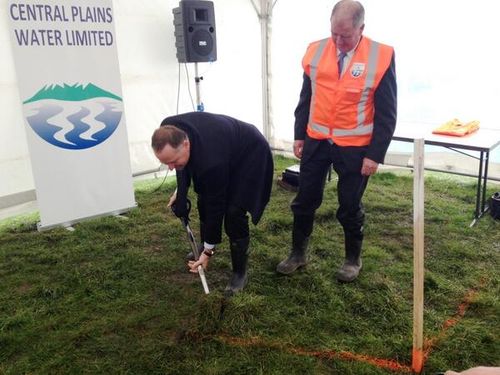 This is the scheme that the National Party have removed a council*, amended the law, and given a taxpayer handout to ensure that dairy farmers could stand on their own two feet. If only the residents of the Flockton Basin were bovine, rather than human, then maybe the government would be turning sods to build a drainage scheme instead of an irrigation scheme.

For Key to stare down the barrel of a camera and give his best "my hands are tied" speech beggars belief. His government has passed legislation giving Brownlee extraordinary powers to get things done in the city. They have removed the regional council so they can expedite the extraction of water in a rural setting. They have undermined the city council time after time on the rebuild of the CBD, and then intervened over building consents. No central government has intervened in the day-to-day running of a region more than this National government. For Key to pretend that he can't do anything is one of the most laughable lies he has ever uttered.

At a water protest we held when the PM opened Nicky Wagner's office on Bealey Ave back in 2010, I remember a conversation we had with Wagner's husband, David. He insisted that irrigation was needed, as there was plenty of water but "it was just in the wrong place". Apart from ignoring the anthropocentric view that there is a "right" place for water to fall, it is a somewhat ironic comment given that most of that water has now fallen on the electorate that his wife represents.

* Tomorrow marks four - yes, four - years since the Government appointed commissioners started at ECan. If you are in Christchurch, we will be holding a memorial service to mourn our lack of democracy, at the Cairn in Cathedral Square. More details here.

Note: James Dann is the Labour Party candidate in the Ilam electorate for this year's general election. The seat is currently held by Gerry Brownlee.