It should have come as no surprise after the narrow referendum defeat last year of a bill to legalise and regulate cannabis that its loudest and best-funded opponents should have wandered off to find a new culture war. The people behind SAM-NZ, Family First and Say Nope to Dope have never really cared about drug policy, evidence or reducing harm to the vulnerable.

But one prominent "No" campaigner, the Salvation Army, issued a statement immediately after the result calling on the government to develop "legislation that provides comprehensive and well thought-through decriminalisation", which should include "the further removal of criminal sanctions for casual use of cannabis" and better funding for drug treatment.

There hasn't been a lot since then, but last week, Ian Hutson, director of the Social Policy and Parliamentary Unit of the Salvation Army, joined addiction medicine specialist Professor Doug Sellman, a declared "Yes" voter in the referendum, to write a column expressing "frustration" at political intransigence and urging Parliament to "immediately enact decriminalisation of cannabis for all users of cannabis".

Their call follows an open letter from the Public Health Association, the New Zealand Medical Association, the Mental Health Foundation and others to overhaul the Misuse of Drugs Act 1975 – which provoked a ridiculous response from Health minister Andrew Little.

There was a similar call from Dr Huhana Hickey, Professor Khylee Quince, Manu Caddie and Dr Mark Hotu, the guests on TVNZ's Marae yesterday, who agreed that reform of our creaking 46 year-old drug law was a matter of urgency. (Dr Hotu seems to have forgotten that he wrote a poorly-reasoned and factually wayward column opposing a "Yes" vote last year, but we'll let that pass.)

Manu expressed the view that further reform this Parliamentary term was not only urgent, but – the statements of Minister Little notwithstanding – likely this term. My understanding is also that Little's position does not necessarily reflect that of his colleagues in government. But I wonder if far too much of the energy required to get to that point will be expended on concocting a way for the minister to save face.

If there is a consensus around decriminalising cannabis, it would be fair to say that is less the case around what decriminalisation should mean.

The Salvation Army called for a removal of criminal penalties for "casual use" of cannabis, but it's unclear what that means. What is non-casual use? Does it include self-growing? The ability to possess a limited quantity without question? Social supply?

In his column with Professor Sellman, Ian Hutson seems to favour Portugal-style decriminalisation of all drugs. I would love for New Zealand to follow Portugal, Norway, Oregon and Australian Capital Territories in doing so, but I'm not sure the Portugese model, which was developed in response to a crisis in intravenous drug use, usefully addresses the reality of cannabis in New Zealand.

Portugese police are supposed to interact with someone using or possessing cannabis in the same way they do for heroin. But they actually don't, because it doesn't really make sense to do so. They're more likely to just ignore someone smoking a joint. So you've still got a law that relies for its viability on not being applied by police.

Professor Sellman writes that his preferred legalisation model would be an equivalent to Sweden's "SOE model" for alcohol, under which the supply of cannabis is a state monopoly. I, too, worry about Big Cannabis – and I thought that the Cannabis Legalisation and Control Bill included provisions around market size, marketing and licensing that could have set an example for the rest of the world. I'd have amended it further to Keep Cannabis Small. But I'm not sure a state monopoly is really a good answer for cannabis.

Why? You only had to be at J Day in Auckland on Saturday to see. There were more vendors this year, a dozen or more, offering a range of home-made cannabis products. There's already a community producing and distributing these products, in a way that doesn't really answer to traditional perceptions of the "drug trade", and it's not simply going to pack up because the state grants itself a monopoly on production or supply.

But it's actually worse than that under the current law. Take a moment to admire these cannabis-containing muffins: 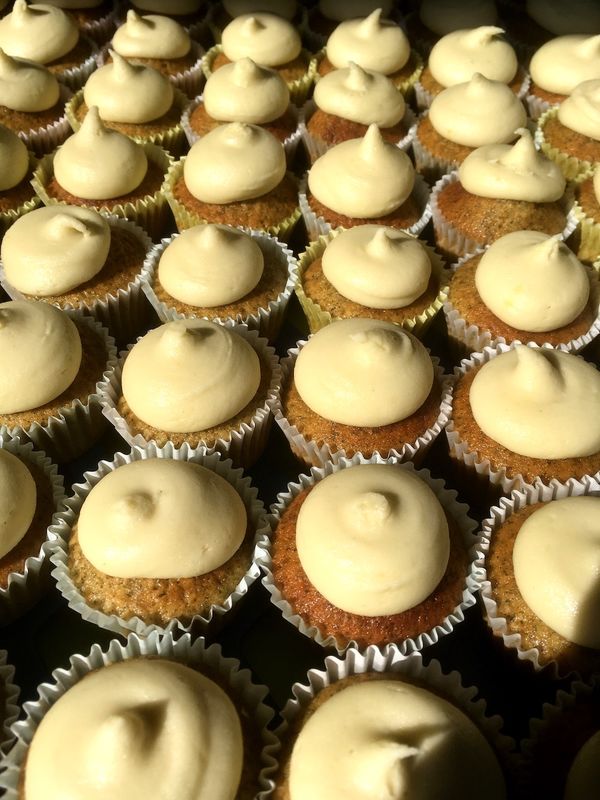 These muffins – and the cooking oil, balms, tinctures and infused honey that were for sale on Saturday – are "cannabis preparations" under the Misuse of Drugs Act 1975. That means that while cannabis flower is a Class C drug, baking it in a muffin escalates it to to Class B – the same as morphine, amphetamine and GHB. If you hand the muffin you have baked to another person, the maximum penalty is 14 years imprisonment.

Of course, the law is not generally enforced that way, because that would be crazy and unjust. For similar reasons, police have taken the approach of regarding J Day events as a form of advocacy and steered clear of them. And, frankly, they have no other need to attend – Saturday in Albert Park was an extremely relaxed affair, thanks in part to the absence of alcohol. 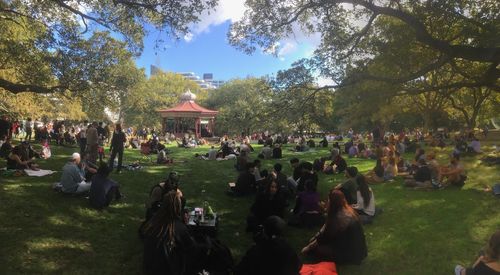 But it's not possible to look at our 46 year-old drug law and honestly declare it's not in need of comprehensive reform. It's time for some moral courage.

Audioculture recently republished my epic two-part feature on touring Europe with The Chills in 1987. But the decision was made to leave out a couple of passages that ran in the mag originally but were deemed unsuitable for a website used in schools. Which is fine and prudent – but it did strike me that landing in this place where things were done differently had prompted me to write for the first time about the culture and economy of drugs. I was just very interested in how it worked:

It tickles something else to appreciate the way cannabis preparations from around the globe have found their way to the corner of the bar of a tiny cafe in Amsterdam. Café dealers will be able to offer a range including Mexican seedless, dry, dusty grass from Africa or Colombia, dark, spicy-smelling buds from Jamaica, hash from Afghanistan (purchased, they say, from rebel forces on the Pakistani border), Nepal, Turkey, Morocco ... and even locally-grown sinsemilla, the product of Californian consumer grass technique. The man will have a board listing his products and prices and possibly a folder, like a photo album, of sample bags. As befits its retail status, most quantities are worked round a 25 guilder (about NZD$25) standard price. At that price for two grams of Jamaican buds it’s not wondrously cheap, but this is retail. If it’s all too confusing you can buy a piece of “space cake” for five-seven guilders.

There are hundreds of cafés in Amsterdam but only dozens which encourage cannabis smoking. Of those which do, some are large, perhaps with two floors, some are small. Those aiming for young tourists have big video and sound systems, while others just hum with a quietly hip soundtrack and low conversation. The big ones serve alcohol, the small ones usually don’t. Some are part of a chain, like the Bulldog cafés, which even extend outside Amsterdam. The Bulldog tries to play both games with its Leidseplein branch which has two basement hash cafés and a big, bright, airy restaurant for tourists upstairs. Periodically, a straying group of English matrons will have to be quietly told by the barmaid that hash is being smoked down here and perhaps they’d be happier upstairs. They have to be careful. One such matron last year was served a piece of space cake, hallucinated, and demanded that the British Foreign Office declare war on Amsterdam.

I was also very interested to, for the first time, read High Times magazine, which was strictly prohibited in New Zealand:

Many bookshops carry English-language publications as well. Notable among them is the legendary drug culture magazine High Times. It’s an obscene publication in many countries – if the ever-lovin’ NZ customs found one in your suitcase they’d certainly take it off you and probably want to have a quick look up your bottom for good measure.

It’s pleasing to find out that High Times is an excellent magazine. It’s well-written, very well researched and the four-colour printing is spot-on, which it has to be to depict the subtle but important differences between one cluster of brown-green buds and another.

Inside each ish there’s Ask Ed, a comprehensive growers’ problem page (“The increasing pH is probably being caused by the gravel, which is probably limestone ...”); the Trans-High Market Quotations, a nationwide chart of current recreational drug prices compiled from readers’ figures; Activist News; a legal directory; a readers’ Top 40 of favourite things (usually topped by sex); and even a lung-watering centrefold.

Individual issues include features like a Ken Kesey interview and short story; an enthusiast’s (everybody connected with the mag seems to be an enthusiast) account of a gruelling trip up the Amazon to sample a little-known hallucinogen called Nu-Nu; good music features covering ground from the Fall to Trouble Funk (but the readership still loves the Grateful Dead, it seems); and a calm, serious article on the danger of crack – and the way its mystique has been inflated by those eager to sell newspapers.

It’s all made possible by heavy advertising support, from the likes of growing-aid manufacturers, peddlers of legal “diet aid” type stimulants, and all manner of non-drug products which intersect with the lifestyle.

High Times is a funny, informative, and, in its resolute matter-of-factness, quite responsible. For better or worse, its ethos is probably summed up by regular writer Ed Hassle: “Drugs can be your friend as long as their power respected. Drugs can grant visions, calm fear, expand the mind, and relieve pain. But they can also cause insanity, bankruptcy and death.”

The irony, of course, is that the Dutch system is now regarded – not least in the Netherlands itself – as dated and in need of reform itself, relying, as it does, on criminals to look after production, import and wholesale supply.