There are lances through time, connections between things, links that run through years and spaces.

In an Internet world, where more and more of the archive is opened up to exploration, this vast mass seems indigestible.  Direct questions and direct answers simply lock us into linear worlds; in order to get the answer, you have to figure the right formulation of the question. Now we follow link-streams to their end… which is different.

We are coming to the stage where the connection is everything. But we need new words to describe just what it is that happening when we move upon these lines of linkage, when we follow the clicks.

“Browsing” is a verb which conveys little. Nor do we have words that explain the odd knots and strange connectives. The German critic and philosopher of technology, Walter Benjamin, and his consideration of ‘convolutes’ in examining the history of 19th Century Paris, is one possible step; for Benjamin a convolute was a knot of revelation, from a line of poetry to the activities of Parisian prostitutes and rag-pickers, whose meaning is perhaps not yet obvious.

There is also an aesthetic that needs to be created. What is a good search? What is a productive browse? How do the links and slants join? How do we explain and comment upon the process?

An example is necessary.

The first ever live-to-radio broadcast from an outdoor location wasn’t breaking news, a political event, or a disaster, it was the song of nightingales from the garden of British cellist Beatrice Harrison at Foyle Riding, near Oxted, in Surrey, at midnight on the 18th May 1924. 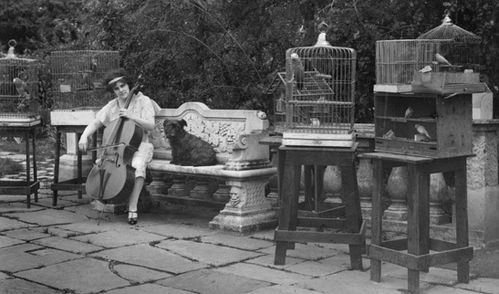 Beatrice Harrison in her garden, 1926.

Harrison was a cellist of some note in Britain. She had given several first performances of the compositions of Delius, and was closely associated with Elgar’s Cello Concerto.  Discovering that nightingales in the woodland that surrounded her Foyle Riding house seemed to sing along while she was practising late at night with her windows open to the summer air, Harrison contacted John Reith, the chairman of the BBC, with a suggestion that he broadcast the event.

Reith was initially dubious but he allowed himself to be convinced.

BBC engineers P. Eckersley and A. West set up the equipment at Foyle Riding that made the experiment possible, most notably the Marconi-Sykes magnetophone.

Previously microphones had been rudimentary “repurposed telephone mouthpieces”, but the Marconi-Sykes magnetophone was beginning to revolutionise radio.  It was a microphone sensitive enough to pick up sounds which had confused engineers until they realised they were insects and birds. Suddenly radio and recording had become broad-spectrum.

From Foyle Riding, the amplified signal from the Marconi-Sykes travelled via the telephone lines to be broadcast from the central BBC station in London, 2LO.

An estimated 1 million people listened to the first nightingale broadcast at midnight on 18th May 1924. It created such a phenomenon the experiment was repeated a month later.

In advance of the second annual Nightingale broadcast in 1925, Reith wrote that the Foyle Riding nightingales had swept Britain with “a wave of something closely akin to emotionalism… a glamour of romance has flashed across the prosaic round of many a life.”

Capitalising on the phenomenon, an HMV Nightingale recording was made on May 3rd, 1927, and featured Beatrice Harrison playing the Northern Irish folk song ‘Londonderry Aire’ also known as ‘Danny Boy’, accompanied by nightingales.

The Nightingale live-broadcast tradition was maintained as an annual event by the BBC. Harrison left Foyle Riding in 1936, but the broadcasts continued with birds solo, until May 19th, 1942, the 18th annual broadcast, when the scheduled broadcast was cut dramatically as it was going to air.

It was World War Two. The microphones in Foyle Riding had picked up the sounds of 197 aircraft massing over Southern England en route to bomb the German city of Mannheim. Unwilling to warn the Germans of an impending raid, the BBC pulled the plug. The Nightingale broadcast was abruptly halted, but as the phone lines were still open and equipment still in place, both nightingales and bombers were recorded on acetate disc.

It is one of the strangely profound audio documents of the British air-war.

The 155 aircraft on that May 19th raid reported hitting Mannheim but once the bombing-photographs were developed, they largely showed forest or open country. The force had undershot its target. No more than 10 aircraft loads fell in the city. 600 incendiaries in the harbour area on the Rhine burnt-out four small industrial concerns: a blanket factory, a mineral-water factory, a chemical wholesalers and a timber merchants. Of the 197 planes dispatched, 12 were lost.

151 miles north of Beatrice Harrison’s Foyle Riding, was the RAF Station at Hemswell.  Some of the bombers caught on the BBC recording probably had their origin here, providing the aircraft that circled over the south and midlands of England in order to create the stacked stream that would then angle off towards Germany.

The Hemswell Base Commander H. I. Cozens, had been trained as photographer and a filmmaker. He had been on the British Arctic Air Route Expedition to Greenland to assess its suitability for a staging post for civil transatlantic flights. He had been awarded the Polar Medal (Silver), for his film of the expedition, 'Northern Lights'.

In 1943 Cozens began shooting what would be the only contemporary colour documentary film of the Bomber airwar. It was designed as a training material for Bomber crews, to give them an overview of the process in which they were involved. It would remain a secret until the 1970s when it was released under the British Government 30 year rule.  It was broadcast, with added commentary, on the BBC in 1978.

Cozens shot the preparation and the implementation of a bombing raid upon Berlin. Designed as an information resource, it is a detailed glimpse of a technological war - even if the rudimentary nature of the technology now gives some pause for thought.

The operational life of the Lancaster bombers, as the documentary voice-over states, averaged only 40 hours flying time. They were mass-made devices, stripped down to the basics. The interiors visible in the film are basic metal. They were unheated, unpressurised aerodynamic alloy-cans, with attached bombs.

The glimpses of ops rooms in requistioned British manor-houses, the briefings, and the loading of aircraft give the film a similar air to Kubrick’s process-obsessed movies like Dr Strangelove or 2001. Cozens has the same eye for minutiae and procedure. But the glimpses of humanity are just as fascinating. The WAAFS, the first real roles women had in the support structures of combat are much in evidence. The insouciance of the bomber crews are remarkable, given the grim statistics. Pet dogs await aircraft return. Telephones ring and are answered. Markers are moved on boards.

More than 1,000 bomber crews were lost in the ‘Battle for Berlin’ airwar. Their average age was 22.

The target for Cozens’ bombers was Berlin, but despite the nightly bombings Berlin was also a city maintaining some form of cultural life - and its technical back-up.

When it came to sound-recording, Germany was leading the world. The Germans had invented and experimented extensively with magnetic tape in the 1930s. Superseding the previous ‘wire’ recording, magnetic tape was developed at BASF, then part of the industrial giant IG Farben, and later by AEG in co-operation with Reichs-Rundfunk-Gesellschaft (RRG), the German national radio network.

Friedrich Matthias of IG Farben/BASF had created the recording tape itself, the oxide, the binder, and the backing material. Walter Weber, working for Hans Joachim von Braunmühl at RRG had radically improved sound quality with the AC bias technique. Originally recording in mono, the Germans swiftly ventured into stereo.

The first stereophonic recordings (two separate channels on the one magnetic tape) were made in 1943 by the staff of RRG. Helmut Krüger was an RRG sound-engineer and utilised the AEG/Magnetophon R22  and the AEG-Telefunken K7 stereo tape recorders as extensively as he could. (Krüger had been nicknamed Krüger-Krüger by his RRG colleagues, in reference to his habit to record everything in stereo.)  He recorded more than 200 live concert performances in stereo, pioneering a miking pattern still in use today, as well as conducting many studio experiments.

The frequency range of the RRG recordings could only be duplicated by the Americans five years after the war, and it wasn’t until the mid-1950s that the quality of the German material and the recording techniques could be equalled.

After the fall of Berlin, the Soviets removed the entire RRG Archive to Moscow in 1945. Some tapes were used to make records released on Melodiya in the 1960s, other languished in storage.  A cultural repatriation was organised in March 1991 and 1462 original RRG recordings found their way back to Berlin, including a handful of Krüger’s stereo tapes.

Beethoven’s Concerto for Piano and Orchestra No 5 had been recorded by RRG in Berlin, as part of the on-going stereo experiments at the very end of 1944.  Featuring the great German pianist Walter Gieseking, and the Großes Berliner Rundfunkorchester under Arthur Rother, the stereo taping had also unintentionally caught the sounds of the anti-aircraft batteries outside the RRG building during an allied air-raid. In the quiet passages of the Allegro movement, (2´30"+, 5´40"+ in the clip), the thumps of the anti-aircraft fire are clearly discernible.

The combination of Beethoven and artillery in a stereo recording from the heart of the German Reich in the last days of the war is another profound historic and audio experience. Under fire, Gieseking and the Großes Berliner Rundfunkorchester prove themselves every bit as good as the well-regarded Berlin Philharmonic. The sound-engineering is crisp, even through the medium of Youtube. The bang of anti-aircraft batteries is an unrhythmic atmosphere. The counterpointing of human impulses, destruction and creation, is almost unique.

But what is this series of links? A meander of thought? Web-surfing? Something we have no words for yet?

For me, the steps from Beatrice Harrison and the nightingales, the RAF bombers and a lost and rediscovered stereo tape recorded in wartime Berlin are something natural, oddly-complex, finely shaped and even exhilarating. It feels whole. It is neat. It is logical. I have no idea what it means, if it signifies, and what it signifies if it does.

It is something most of us experience every day in our wanderings through the great archives that have been opened to us for the price of an internet connection. Sometimes we discover a somehow meaningful linkage. Sometimes our experience of these links fulfils and thrills. At other times they are a mess of truncated engagements and restless ennui, with intervals of engaging cats.

Writing about these link experiences is in its infancy. We need words to describe and shape them. We need concepts on which to base the aesthetics. We need ways to describe the discoveries. We need critics of link-series and commentators who can reveal the nuggets at the heart of the process.  We need new ways to formulate the activity and to judge it.

We especially need ways to describe the odd condensation of it, the 'slice through time' aspect, and how illuminating and bright it sometimes seems.