A month ago, American indie distributor KinoLorber released Taika Waititi's Boy on DVD and BluRay in a market where Waititi funded the film's extremely limited American release through a Kickstarter. 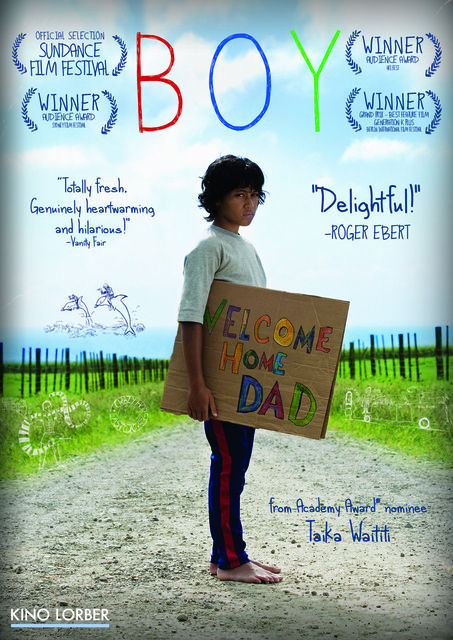 You'd think it's something of a no-brainer to sell a film with a mostly indigenous cast with an image from the film - of a non-celebrity brown person, no less. Right?

Someone should have told Anchor Bay, whose home media release of Australian historical drama The Sapphires hasn't even been released yet, but has managed to piss off pretty much everyone from the women whose lives it's based on to O'Dowd himself. 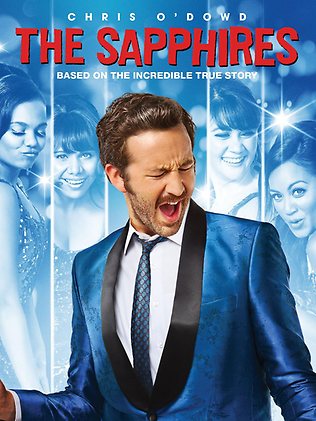 Believe it or, The Sapphires isn't the incredible true story of an Irish lounge singer who gets his knob chewed off by an enraged wombat, though I'm sure Chris O'Dowd would do a splendid job of it.  I seem to be the only person on earth who finds Bridesmaids utterly resistible, but Moone Boy (which O'Dowd created, co-wrote and starred in) is a genuine Irish charmer it's worth climbing over the Sky paywall - or laying hands on the DVDs to catch.  It's not O'Dowd's talent that's in question here.

The sticking point is that, as blogger MaryAnn Johanson put it on flickfilosopher.com:

The Sapphires is the story of four young Australian women who form a singing group and travel to Vietnam in the 1960s to entertain the American troops there. Their new manager, who is along for the ride, is indeed a white man. The women are Aborigines. They are black black black black blackety-black black. Not blue. Oh, and they’re women. And this is their story. It’s even a true story.

[T]he most you can say about his character here is that he is part of an ensemble. He is not the lead character. And he is outweighed in that ensemble by four nonwhite women. So why are they shoved into the background, the color of their skin disguised by that blue monotone?

Never fear MaryAnn!  Here comes a white man to explain why all these silly women and people of colour need to "stop being hysterical" (tm) and get a grip on how "the world works" (c).  Come 0n down, "National Film Editor for Fairfax Media" Karl Quinn who penned a point-dodging column headlined: Sapphires' cover is not racist, just smart.

The whole thing is worth reading with a sickbag in hand, but here's the bit where I jammed said bag over my head and started emitting a high-pitched scream.

As ''issue'' films go, The Sapphires is at the softer end of the spectrum: a feel-good story about four Aboriginal women who triumph against sexism and racism to forge a sparkling career as soul singers in the most unlikely of theatres, the Vietnam War.

However, the film now finds itself on the frontline, its American DVD cover accused of perpetuating the very sexism and racism it so gently rails against.

[...]Let us assume for a moment that The Sapphires has some power to change people's minds about racism and sexism. If so, it has its best chance to do so by getting in front of as many people as possible.

Presumably it is white people's minds that most need to be opened on matters of racism towards ''people of colour''. But in the US, putting four black women who are not Diana Ross, Beyonce or Rihanna on the cover of a DVD is tantamount to saying ''this ain't for you, whitey''.

OK, Karl, I'll rise to the bait.  First, I'd expect a senior film journalist (or anyone with decent Google-fu) to know Diana Ross hasn't made a feature since The Wiz in 1978. Rihanna not only didn't grace the poster of her latest film, This Is The End, but Emma Watson's cameo got higher billing that RiRi's.  And of course Beyonce is all over the publicity of her recent HBO infomercial-disguised-as-a-documentary because... well, you know.  Still, good to know some of your favourite CDs are by black chicks. It's your DVD collection I don't want to know about.

Meanwhile, somewhere in America, "whitey" is so repulsed by by the sight of four black woman on the cover of a DVD they have to be transformed into a white guy's backing Smurfettes.  After they've been so bamboozled, they're going to get past the first fifteen minutes of scary Aboriginals before the guy who shags the chick who doesn't shit her pants in Bridesmaids shows up? Deborah Mailman, Jessica Mauboy, Shari Sebbens and Miranda Tapsell give wonderful performances here. But nobody's that good, if you're working off the presumption that the audience for your film has to be tricked into picking it up in the first place.  All Anchor Bay - and Quinn - are doing is insulting everyone's intelligence.

That's the problem with the circle jerk reasoning behind using the existence of racism (and sexism) to justify perpetuating it still further.  Taken to the reductio ad absurdum, why bother making - let alone releasing - films by, or about, about anyone other than straight white middle-class men at all?

But, hey!  Mailman and Co. should take one for the profile of the Australian film industry! Right?

Selling an Australian film, here or abroad, is never easy and while it was a bona fide hit at home, taking $14.5 million at the box office, The Sapphires took only $2.5 million in US cinemas, despite having the considerable muscle and nous of Harvey Weinstein behind it.

The US cover carries the words ''based on the incredible true story'', a line with a fair chance of getting someone to read the blurb on the back - but first they have to pick it up. This is where O'Dowd comes in.

Again, I have to ask what exactly Fairfax's "national film editor" does all day.  Does Quinn remember a little loosely-based-on-fact and blindingly white Aussie crime drama called Animal Kingdom? Three years earlier, it grossed less than US$1.1 million at the American box office, despite having the considerable muscle of Sony Pictures Classics AND the free media from female lead Jackie Weaver's Oscar nomination AND then current Aussie It Boy Joel Edgerton in just one of a string of flashy, effusively well-reviewed supporting roles.

Selling any "foreign" movie into the American market is hard. It's not hard to find decades of American cineastes complaining about the decline of the arthouse/indie cinemas; and lively debate on whether the rise of new technologies - from VCRs to online 'streaming' services and downright piracy - are a blessing or a curse.

If Quinn was doing his job he might be asking this question.  How well was anyone really expecting The Sapphires or Animal Planet when at their widest release (according to Box Office Mojo) they were screening at 126 and 61 theatres respectively?  By way of comparison, Man of Steel opened at four thousand theatres.

Like the old joke about Jews, you put three film critics in a room you get four opinions, five loud arguments and eventually a fist fight.  But  whitewashing indigenous women out of their own stories - and in a culture not exactly overstocked with stories about or by women - is being "smart" in all the wrong ways.

ETA: Because credit is cool as the outgoing Doctor Who's bowties, many thanks and hat-tips to Che Tibby (@Che_Tibby), Dan Slevin (@danslevin), Chris Philpott (@chrisphilpottnz ) and Moata Tamaira (@MoataTamaira) for much stimulating Twitter dialogue and pointers. The opinions expressed above are my own, of course, but they're damn fine folks to refine my views on.