I went to Samoa the other weekend.   It was a work trip (I know, right, but someone’s gotta do it), filming an interview and links for this season’s final episode of Hindsight, airing at the end of the month. (Might have more blogging time after that, we'll see).

It was the second time I’ve been to a Pacific Island this year; a couple of months ago we went for a ten-day holiday in Rarotonga, so I was interested in the comparison. Rarotonga was enjoyable enough, but ten days was too long, the island didn’t really hold our interest, everything was expensive and there was no sense of adventure. On the other hand, our friends who’d come to stay with us for half the time loved it, and talked of going back every year. I think that’s probably the divide right there – some people enjoy returning to a relaxing favourite spot, others want to continually seek out somewhere new. I’m not saying either is better, but I’m definitely in the latter camp. (Because it’s better). 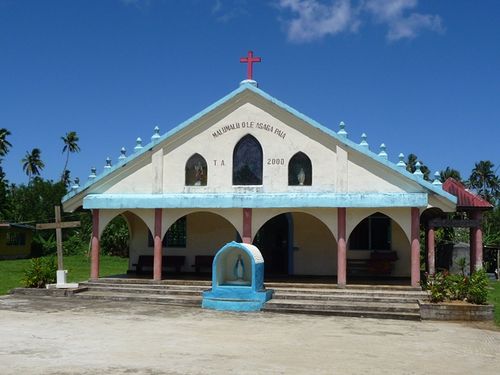 Without immediately contradicting myself then, I would return to Samoa – next time with my Beloved, for a little longer, and with more time to explore, particularly the other island, Savai’i, which I didn’t get to this time around, and seems more rugged, wild and perhaps beautiful.

First thing I enjoyed about Samoa, it has a sense of authenticity. Driving from the airport into Apia, you pass through a dozen or more villages. Each village proudly proclaims its name – with a complete absence of street signs, it’s the only way you have any idea where you are on a map – each boasts one or more massive churches, each has a number of grand open-sided fale (fah-lay) lining the road. While these are often used for meetings or just generally hanging out in during the hottest part of the day, I’m told they are also symbolic. These days many Samoans have a more western style house tucked in behind the fale, but the open walls of the fale is a sign of constant openness and hospitality to friends and family. 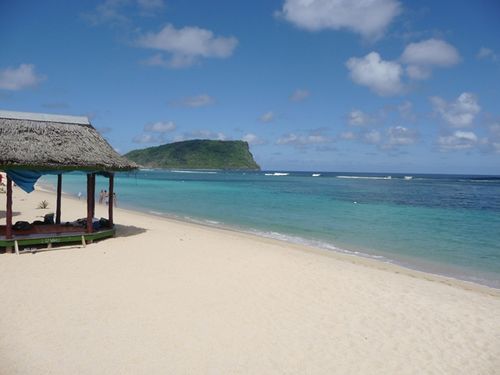 And so in these villages life goes on without any regard to tourists. I know that might seem self-evident, but if you’ve travelled through South East Asia, you’ll realise it’s exceptional in a tourist destination. There are no roadside trinket stalls, for instance. And so when you putt through a village and find a game of kirikiti (cricket) occupying the road and adjacent fields, the fielders breaking into spontaneous yet choreographed dances to celebrate some happening or another, you know it’s got nothing to do with you.

These villages are largely self-sustaining. They fish, further inland they harvest taro, coconuts and other crops. During the day people work on the land, although much like the Spanish it seems they also have a chill out period during the height of the day’s heat. 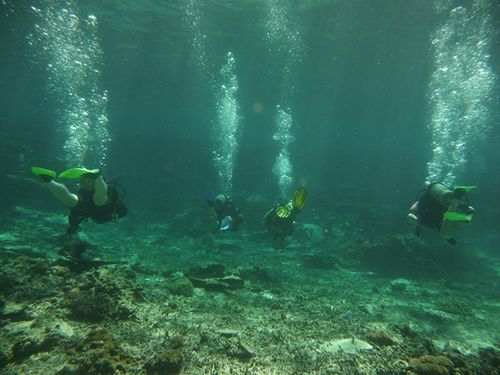 The weather was spectacular while we were there. 28 degrees and sunny every day, no rain. On the other hand the lady who was very quick to collect our money at the natural wonder that is ‘sliding rocks’ might have warned us this meant less sliding, more rocks. I’d say avoid that unless it’s been raining recently.

My cameraman and I both agreed if there was one thing that would stop us living there, it was the driving. The speed limit is 40kmp/h within town and villages, and 60kmp/h between villages. There’s villages every kilometre it seems, and it’s hard to say when one ends, and then just in case you were tempted to speed there’s speed humps every few hundred metres, even in the midst of “open road”. Add to this the fact most people are content to drift along at 30kmp/h regardless and it becomes a frustrating experience, especially as the island is a big place, (at least a couple of hundred kilometres around) so it takes a while to get anywhere. 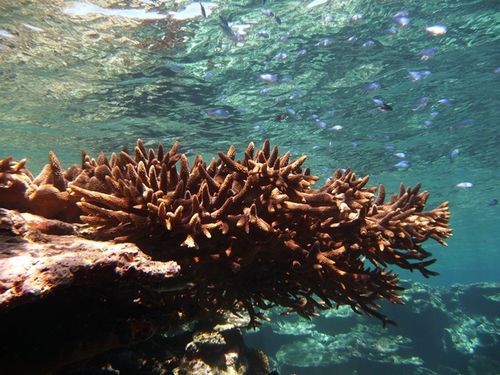 The almost complete absence of street signs, even within central Apia, also causes a few issues.

I went for a little dive while I was there – the short trip meant I really only had one opportunity, which that day was a bit of a baby dive, 7m deep, and while it was pretty enough, there wasn’t that much going on. I’d be keen to head back and do it properly, perhaps off Savai’i. I felt for the dive operator though, AquaSamoa.  Being located on the grounds of Aggie Grey’s Resort (as opposed to the original Aggie Grey’s in Apia) might usually be a good thing, but when the crew of Survivor turn up, book the place out for months, and inform security to actively turn away everyone including paying divers, well, business is struggling. 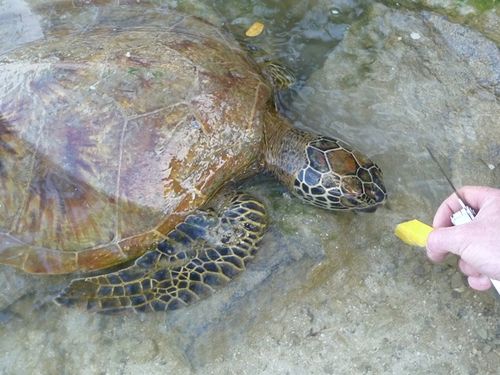 In short, we had a great time, and I’d highly recommend it, with the following caveats: Check the addition, we had a few cases of ‘mistaken’ overcharging, which were quickly and apologetically rectified, but still – the Avis one alone would have cost us $300 if not spotted; and don’t expect too much in the way of bars and restaurants – the lack of ‘touristy’ feel does come with its downside. Not to say there’s no decent places to eat – Scalini’s is a great Italian restaurant (!) on the cross-island road.

And finally, although this is only an issue until the end of the year, (at which time Samoa is unilaterally shifting its place on the international date line to bring it in line with NZ), check your itinerary, even if it’s been  booked by a respectable travel agent. You will leave in the evening and arrive early the previous morning. You will find your hotel. It won’t be booked until the following day and will be full. You will be stranded at Apia at 3am with nowhere to sleep. Coming back, as happened to a friend recently, you will get all confused and turn up at the airport to discover your flight left yesterday. You will do what we did in Rarotonga, leave on Sunday and forget that you land on Tuesday and might need to talk to your boss about having Monday off. Mind you, just like being an hour late every time the clocks change for daylight savings, it’s a pretty good excuse. Try it. 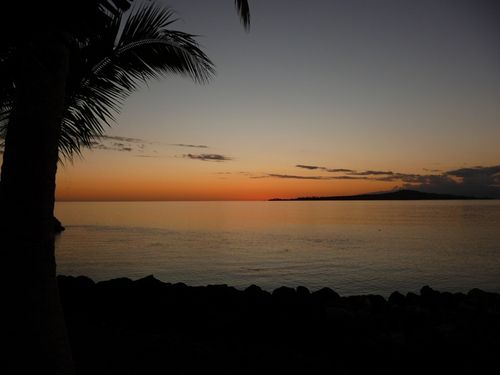