One of the things Metro always does when reviewing restaurants is go there twice – and it makes sense – it halves the chance (stand down, Keith Ng, if this not literally true) that you’ve just struck the waiter or chef on an off night, or conversely, you’re the only person that night whose order wasn’t screwed up.

People have been raving about The Oyster Inn on Waiheke, a lovely fit-out on the top story of an old wooden colonial style building with a covered veranda overlooking the Oneroa shops and across the bay. 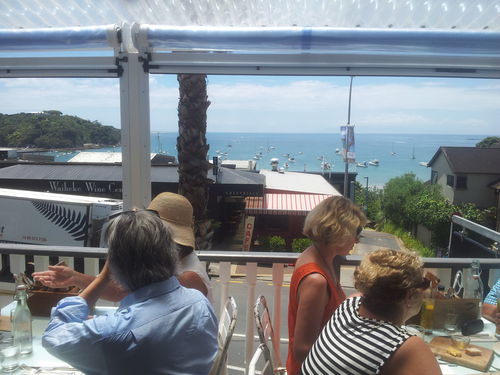 Chef Cristian Hossack was by all accounts poached from, or at least had previously been employed at, Peter Gordon’s Providores in London. The style will be very familiar to anyone who’s been to Al Brown’s Depot at Sky City – a variety of oysters and other shellfish offered on the menu along with small sharing plates (sliders, calamari and the like) but departs from Depot by offering meals designed to be eaten by one rather than larger plates to share. Perhaps also conscious of the difficulty in being too niche on an island where half the year is a wasteland, Oyster Inn opens at 8am offering a small but appetising breakfast menu.

Two visits found the food without fault. The spaghetti alle vongole (with Cloud Bay clams) was delicious, the octopus barley salad bright and fresh, and the tempura oyster ‘po boy’ roll – the item that enticed me to return for our second visit a wonderful soft, juicy treat with wasabi tobiko mayonnaise. It’s a shame they don’t unbundle the fish ‘n’ chips, because while a bit of battered whatever will never tempt me with other delights on offer, the triple-cooked fries were calling to me from the neighbour’s table. I asked, but it is impossible apparently, the chips can only be sold with the fish. The shoestring fries didn’t have similar appeal. The wine list is well populated, with the inclusion of some of Waiheke’s finest, including Man O’ War vineyards and Cable Bay. 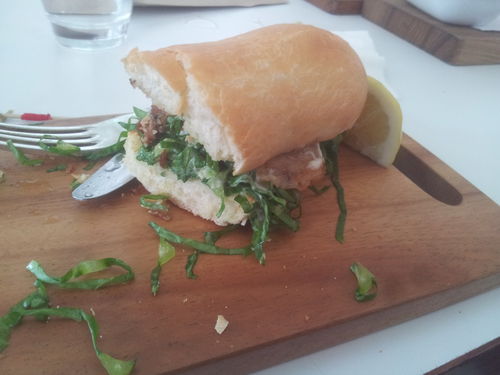 I’d popped in for a drink on a previous visit to the island and found the place overrun with staff literally bumping into each other– it seemed more like NZ Railways in the 70s than the sort of lean operation one expects these days. Our subsequent visits didn’t show the same problem, but adverts in the local paper indicated they were looking for more staff, so it’s hard to know where it’ll settle.

The front of house staff were very friendly – our phone request for a highchair hadn’t made it to the booking sheet but that was easily remedied. (Parental note – at 14 months, and still wearing much smaller clothes than his age, Harry only just squeezed into the chair, the frame of which doesn’t adjust). And the service was good – with one exception which ended up clouding our second visit a bit.

A simple enough mistake – a forgotten drinks order. But while we waited, and waited, our waiter didn’t notice either that we were waiting, or that we had no drinks. I asked another waiter – ours was busy elsewhere – and she dismissed our query with a “they’ll be coming”. Finally, after asking again, our waiter realised her mistake – but rather than being remedied with all due haste, the order seemed to go to the back of the queue.  So there we were, 40 minutes after arriving, midway through our meals, without a drink. “So how is everything?” asked our waiter, a question that perhaps should have waited until we had a glass of wine in our hands.

It’s probably quite hard to get good staff on Waiheke – it seems hard enough in town. And while a forgotten order is totally forgivable, not noticing for more than half an hour – and then failing to sort it quickly, if not make that round on the house, is far less so. I guess I’m a bit OCD or something, but when I’m waiting for something to turn up that is long overdue, I find it impossible to relax. It basically ruins things for me.

Much of the problem comes down to a lack of simple observation by staff. When you have just four or five tables to manage, you should be constantly scanning those tables when you walk past. Who is going to need a drink soon, whose plates need clearing, who’s rocking in the corner because you’ve forgotten his wine for half an hour. Our waiter also failed to notice a small pile of Harry’s own lunch rubbish, a banana skin and empty yoghurt container sitting on our table – we’d brought it in, but a decent waiter would spot it and take it away.

Running a restaurant on Waiheke is an incredibly difficult business, even if everything is just right, and this place is so close. Locals are more interested in somewhere cheap to eat or drink, and townies will have to be convinced to spend their limited time in Oneroa rather than eating at a winery somewhere. Then there’s the six months of the year when tourism virtually shuts down. With the amount of investment the owners have put in (I’ve heard figures with lots of zeroes) for a fit out including a separate shop, private dining room and apartments, it’d be a shame to be let down by a few simple skills. I wish them all the best - I'll certainly be back.