One of the things I notice about getting old is how time seems to condense.  What was once simply shorthand – “oh I saw such-and-such the other day” ­– when in fact I saw him a couple of months ago, after a while actually feels true. It does seem like only a couple of years ago I was in Afghanistan, and yet it must be closer to four now.

Point being, when I went to Sydney on the weekend, I knew I hadn’t been for some time, and it can’t be far off a decade.

Sydney polarises people I think. It’s like Auckland. For some it seems too flashy, a bit up itself. They prefer Melbourne, which is more of a grungy, Wellingtony sort of a city. People in Melbourne are in bands. People in Sydney are DJs or at least like dancing to them. People in Melbourne wear chucks, Sydney’s all about the stilettos. 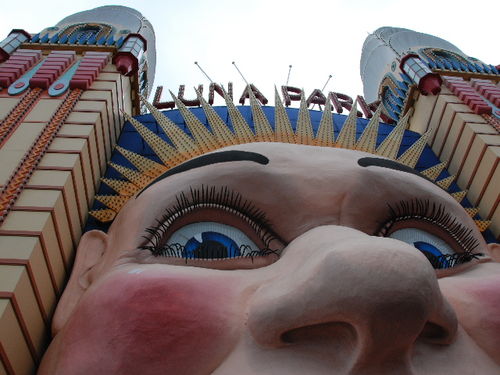 I’d had fun in Sydney in the past, admittedly back when I was managing a house DJ and writing for a dance magazine. And as I stopped doing that so much I generally thought I was a Melbourne-type too, all chucks and grunge.

But from the time my taxi pulled up at the hotel, I thought Sydney was excellent.

Okay, so the hotel was the Sebel Pier One, which is down at the Rocks, one of Sydney’s most historic quarters. And I’d spent the previous night staying in a place in Wellington by the name of the Silver Oaks, about which the only positive thing I can say is it recalled the ironically named ‘Happiness Hotel’ from The Great Muppet Caper (2'55" in). But the Sebel, great. High stud (the room, that is), day bed, night bed, right by the water. Probably never be able to afford to stay there myself, I didn’t check the rate.

Because yes, tinny chap that I am, someone else was picking up most of the tab. Tourism Australia, lovely folk. I hasten to add this sort of thing happens very infrequently, but you know, gift horse, mouth, you’d do the same, right? And it was my birthday…

The ostensible reason I was there was for the YouTube Symphony Orchestra (YTSO). Kinda like that Iggy Pop Orcon commercial, where musicians audition over the internet, except with more bassoons. And french horns, violas and so forth. And rather than culminating in a virtual performance, the many and varied members of the orchestra were flown from their many and varied home countries to Sydney for a a week of rehearsals and small gigs, culminating in a grand performance at the Sydney Opera House on Sunday night.

Going inside the Opera House for the first time (at a rehearsal earlier in the week) was a real treat. Perched on the harbour, the walkway around the grand hall looking across the water is impressive enough, but entering the hall was something else – there’s something about a room built with such a singular purpose, on such a grand scale. 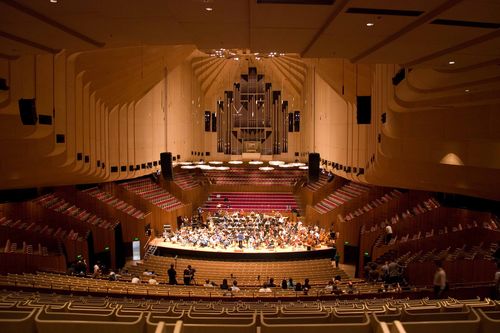 The Sunday night event was a great showcase for Sydney – the Opera House was lit up both inside and out by projections from ….  If I’m being honest, the projections weren’t the best of their kind. It was as though the projector was stuck on screensaver mode half the time – a nineties screensaver at that. Swirls of rainbow coloured ribbons and spirographs, with little or no relevance to the shape and structure of the Opera House – this to me is the art of the public projection, working with the geometry of your canvas, twisting and melding the very shape itself.

That’s just a minor observation though. The performance was wonderful. An amazing solo on the massive Opera House organ was a stand out for me; surely it’s the only instrument where you are actually playing notes (as opposed to beats, drummers…) with all four limbs at once? As well as the projections, much thought had been given to the audience viewing around the world – short video packages had been produced introducing various members of the orchestra, interviewed in their home country. A friend noted that all the members chosen for the one-on-one star treatment were particularly attractive, and I wonder if that was part of the overall criteria – I mean, there must be a lot of talented violinists around the world right, might as well pick a hot one.  There was also a (hot) visual artist from the Ukraine, whose chosen medium was sand sprinkled and swept over a light box, projected onto the big screen.  And sitting at the back of the hall, the internal projections were quite impressive too. 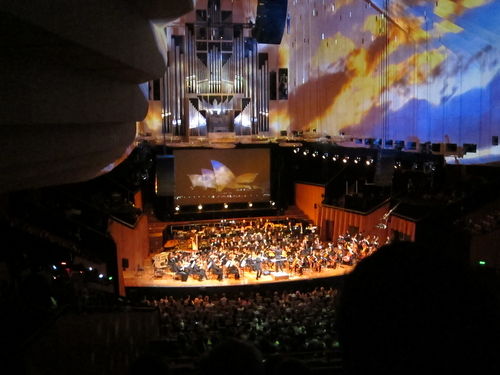 The event, as it turned out was huge.  This from the PR people:

33 million people around the world watched the YouTube Symphony Orchestra Grand Finale.  There were 11.1 million streams of the event during the 3.5 hour concert, making it the most-watched live music concert on YouTube to date (beating out U2 at 10 million).  A further 19.1 million streams took place it as the concert was replayed on YouTube over the next 24 hours.  The mobile live-stream was viewed 2.8 million times - making it the biggest ever YouTube mobile live-stream.  The total stream transferred 422TB of data - the equivalent of sending 145 million mp3 files.

Which is massive. Almost as massive as Rebecca Black’s Friday (currently sitting on 80 million) or this funny cats compilation (50 million). Unfortunately the problem for the people at YouTube is that no matter how awesome their concept, no matter how much money they spend getting musicians from around the world to converge on Sydney, or media to attend, nothing they ever do will be as popular as “Charlie bit my finger”.  But I reckon YouTube were still pretty happy. I mean, bigger than U2.

The morning after we arrived was booked for a climb of the Harbour Bridge – I was a little tired from the previous day’s early flight, and a few drinks later on, but despite being told the climb was reasonably strenuous, it was almost literally a walk in the park (if the park was a collection of welded steel girders over the harbour). I don’t have a particular fear of heights, so the only nerve-wracking bit was the breath test everyone is subjected to before they are allowed to climb. Again, not that it’s dangerous – the pathways are comfortable, with handrails, and you’re constantly clipped to the structure via a safety harness – but it’s all about safety (and keeping the Sydney Bridge Authority happy, I guess).  And the suits are very flattering... 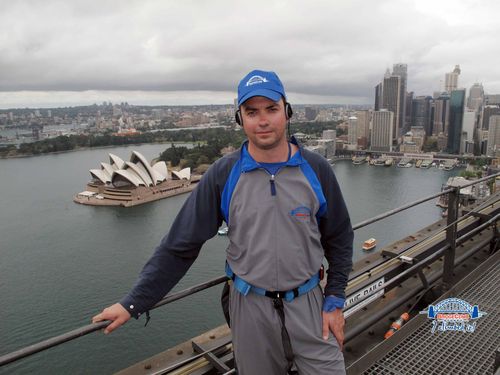 The rest of the weekend I spent venturing around Sydney. A quick trip across the harbour to the faded glory of Lunar Park - worth it just for the photographic opportunities, though I'd love to head back at night when it's all lit up.  Although be warned, if you've got a phobia of clowns... 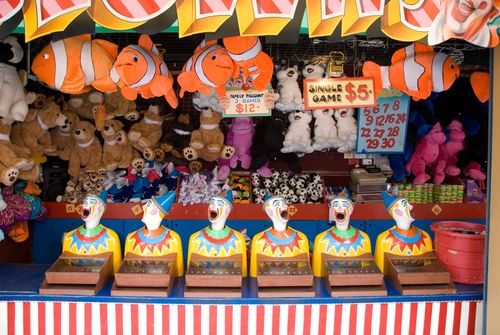 Having spent a bit of time recently discussing the future of Auckland City, it was interesting to be in a city that has got a lot of things right. A harbour area which is a focal point for the city. Wonderful heritage buildings, which reinforced how many we have knocked down, and how much we should fight to save the ones we have left. Medium-density housing in the city, rather than a proliferation of cramped apartments surrounded by miles of ‘pavlova paradise’ suburban sprawl.

One thing I envy about other great cities is simply the benefits of population. With 4.58 million people – that’s almost 200,000 more than we’ve got in the whole country, Sydney can afford a greater variety of shops, restaurants and bars. Rows of great clothing stores along Oxford Street (nice to see a few New Zealand names tucked in there), the proper ‘department store’ vibe of David Jones, which echoes Barneys (NYC) or Selfridges (London). The ability to have not just one but a number of specialist shops, and have them on a massive scale – the two storey HobbyCo filled with model trains, planes and automobiles, not to mention enough Star Wars merchandise to make any Padawan drool.

Obviously with just a weekend to venture out, we barely touched the surface, food and drink wise. Lunch at the Quay (“you can’t wear your thongs there” advised the concierge) was a highlight, while dinner at the Ivy was unintentionally hilarious – the food and service were great, I have to say, but shee-it that place is a meat market. A bar and restaurant set around a swimming pool, alongside which beautiful women in body-hugging mini-dresses and high heels paraded as though on a cat-walk – an appropriate name given the onlooking lions, mainly from the financial sector I’m told, who sat and licked their chops. 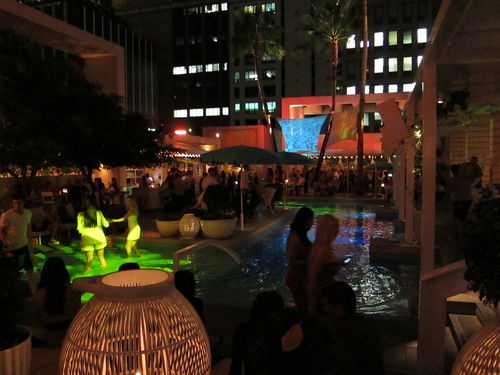 One thing that’s obvious when you head to Australia – they’re doing very well. It’s reflected in the mood of the people, the discussions on the talkback radio (okay they’re still angry, marginalised right-wing idiots, but somehow they seem less concerned than our angry, marginalised right-wing idiots), it’s just you know, the vibe. Returning home to news of more cutbacks, a ‘zero budget’ and so forth, the gap seems wider than ever, and John Key’s suggestion of catching up with them by 2025 as fanciful as Phil Goff’s suggestion that he still has any chance of being the next Labour Prime Minister.

Not that I’m thinking of moving over the ditch – I’m happy with our 1/8th of an acre amidst the suburban sprawl. But it’s good to be reminded that if you want to be immersed in a proper international city for a weekend, there’s a good option just a few hours away. And next time I say “I went to Sydney the other day”, it’ll be a lot more likely to be true. 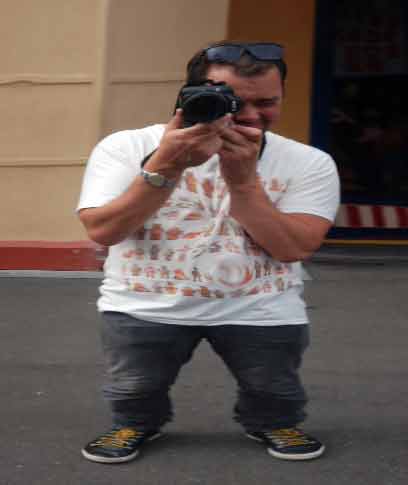 (A portrait of the author as a short man)