One thing I've been hearing fairly regularly, usually from more conservative voters, is that they're wary of voting "yes" for legalisation and regulation of cannabis, but that they'd definitely get behind decriminalisation if that was on offer.

I think most of them are sincere in saying so, and I understand the appeal of decriminalisation: it seems like a nice middle ground, easing the harm of criminalisation without going all the way. But I also think that it's clearly  an inferior option that comes with its own risks.

So I was pleased to hear John Hudak, Deputy Director of the Center for Effective Public Management at the Brookings Institution, address the choice during last week's Helen Clark Foundation webinar on the cannabis referendum, in response to a viewer question. He had this to say:

The United States definitely debated those topics. In fact, in the 1970s a lot of states decriminalised cannabis, starting with Oregon in 1972 or 1974, and including a lot of liberal and a lot of conservative states – north, south, west.

For your viewers who are unfamiliar with the distinction, legalisation is an outright legal system with some sort of method of supply and then the ability to have some sort of transaction, whether it's a monetary transaction or a gifting transaction, to meet demand.

Decriminalisation does not remove all legal barriers against cannabis. But in the United States, what it does is it turns a minor crime into the equivalent of a speeding ticket or a traffic ticket. That is certainly a much smaller punishment for possessing cannabis or using it in the wrong places, but it is still a drug offence in the United States.

And what we found is, in states that have decriminalised, those racial biases do not change. In fact, in some places they get worse. And so police are still able to use the existing law enforcement apparatus to really disproportionately impact certain communities.

And so decriminalisation is simply driving the market into the shadows, and making sure that the government is halfway okay with something, but not okay enough to regulate its safety, and to regulate whether children are going to get access to it or to regulate the manner in which businesses operate or where they operate. They're comfortable with people using it for a small fine and also using it from illegal operators who are producing it and selling it.

To me, that's just a screwed up system. Either keep it illegal, because you think it should be illegal, or legalise it and regulate it and tax it, and make it more responsive. The decriminalisation middle-ground just, like I said, is the sort of policy upside-down for me. It's continued costs and very few benefits.

The report of the Chief Science Advisor's expert panel also addressed the issue in its Prohibition vs legalisation section. The panel said that in New Zealand "over the past decade the regulation has morphed into a ‘soft decriminalisation’ approach" and observed that the government tried to emphasise health-based rather criminal justice responses in last year's Misuse of Drugs Act amendment guiding police discretion. But:

It is too early to have solid evidence for the difference this approach has made to cannabis use, enforcement and harm. However, early signs, supported by a wealth of related evidence here and overseas, suggests that such discretion may not be applied equally. Discriminatory policing and justice outcomes result from the uneven application of cannabis laws, especially for Māori.

Derek Cheng in the Herald last week did a very good job of confirming those discriminatory outcomes in an analysis last week. Working with police data since the amendment came into force last August, he found that Police did start directing more cannabis possession cases away from court. For Māori, that lasted a month – then it was back to being disproportionately criminalised. 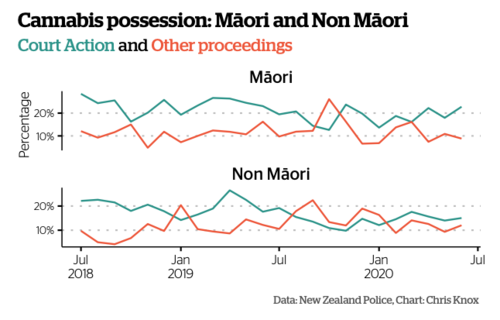 This also came up in a debate I took part in last week, where one speaker insisted that cannabis wasn't criminalised any more. Helen Clark observed that between 2000 and 3000 New Zealanders a year are still very much criminalised for cannabis offences. That number has come down quite a lot over the past decade. But the idea that selective application of the criminal law – which is what our "soft decriminalisation" actually is – is a long-term solution is hard to defend in the face of clear evidence of continued racial baias.

I honestly worry about us drifting into a messy, unregulated de facto decriminalised space if "No" prevails. That's what happened in Canada, where dab bars operated and youth use actually went up – until legalisation reversed the trend.

Even if you formally decriminalise use and possession – and choose a flavour of decriminalisation where it is not an offence at all to use or possess cannabis, but producing or supplying it can only be done by criminals – you're missing out on a lot of benefits. No standards, no age limits, no  potency labelling, no separation from the sale of other substances, no public revenue.

Frankly, let's just regulate carefully and do it properly.

PS: Here's that webinar in full. The foundation have kindly sent me a transcript, so I'll probably dip into that again this week.