I'm sitting here with the re-released vinyl pressing of The Clean's Vehicle on the turntable and the gatefold sleeve open on my desk in front of me, and it's quite a profound experience. Hearing those bright, economical pop songs and reading the recollections of the Kilgour brothers and Robert Scott that line the gatefold has sent my head back a quarter of a century, to good times in London.

As David Kilgour notes in his account, things get mixed up in memory. The separate events of three years all seem like one bundle. But it starts in 1988.

I began the year working at the Virgin Records store in Marble Arch, having frequent and lively sex with a Scottish girl called Tina who worked there too, and living in a brilliant squat in Bonnington Square in Vauxhall.

I ended it writing most of something called The Guinness Book of Rock Stars for a chart research firm called MRIB and living in a squatted council flat on South Lambeth Estate, which occupied a block bordered on one side by Fentiman Road, where the terraced houses were sought after by up-and-coming Tory MPs, and on the other by Dorset Road, where sad-eyed youths sold heroin in the shadows. By then, Fiona had come to London and we'd finally got properly together. And my word, we had some fun that year.

I was still at 62 Bonnington Square when we heard that David and Hamish were coming over (here, my memory diverges from David's, because he recalls being in London before Hamish was fetched over from New York) and one indifferent Saturday morning I made the long journey to Wembley to queue for tickets to Prince's Lovesexy show at Wembley Arena, so we could all see that.

That wasn't all we saw. I'd completely forgotten that David and Geneveive came along to the Public Enemy show at the Electric Ballroom (amid a media panic they'd had their date at the Hammersmith Odeon cancelled) , the one where Professor Griff made his "white people are wicked" speech and my friend Ahu Te Ua got mugged. They went to the most intense gig I have ever been at on their first night in London.

As David notes, we also "caught the last night of The Trip at the Astoria high on MDMA," a legendary landmark of the acid house phenomenon that exploded that year in Britain. A young man with giant sunglasses sorted us out for Es and we danced for hours. I recall at one point becoming concerned for Hamish, who wasn't usually a partier, and I couldn't see him anywhere in the wild scene around us. I was worried he might be freaking out in a corridor somewhere and I was about to go and look for him when I turned around and looked behind me. Hamish was dancing. On a podium.

Oddly enough, I can't recall much of the gig at the Fulham Greyhoud where In A Live, the rare (hitherto only released on Fying Nun Europe) live EP bundled with the new Vehicle package, was recorded. I think it says something about the essential chemistry of The Clean that they'd only had a little warm-up show before they played the bristling set captured on that record. They'd been apart for, what, five years?

I'm pleased that David acknowledges the role of Craig Taylor, the New Zealander who managed The Chills and established Flying Nun UK and Flying Nun Europe. He's often left out of the histories, but but he was such a pivotal figure in what happened. It was Craig who invited along Rough Trade founder Geoff Travis to the Fulham show. What Travis heard moved him to get behind the recording project that became Vehicle.

It was the following year, off the end of a European tour where the  reformed Clean discovered they could fill clubs in across the continent (and especially in that fertile ground for New Zealand music, Germany) that Vehicle was recorded. Blackwing Studios was near the offices of Sounds, for which I was writing at the time, and I remember popping in the sessions and it being a happy and relaxed time. I'm not sure what we were all expecting from the recordings, but what we was got was a bunch of songs written before the tour and honed on the road into, as Robert puts it, "motorik pop gems, often keyboard-driven and quite short and to the point."

Vehicle does stand alone in the Clean canon. It was their first full album, the first recording the band had made on more than four tracks, and one full of the fizz of them discovering that they had a mad following half a world away from where they made their early records. You can hear the seeds of David's solo albums quite clearly in songs like 'The Blue'.

There was one more tour in that era, to promote the album in 1990. I really only remember three things from that time. One is an alarming Anzac Day show in Hammersmith where the Dance Exponents also played. I never did have much time for the expat scene and it didn't really seem the right place for The Clean either.

The other is that Hamish stayed with us in Sandmere Road, Brixton, and thanked us by drawing a picture of the funny little dining room on the ground floor. We hung it on the wall of that room. I'd like to say that fab picture is tucked away somewhere safe, but the truth is (I checked several years ago), no one can say where it is now.

No matter. I still have the image in my head, of its bright pastel colours and skew-whiff perspectives. Indeed, the same description might be applied to all my memories of that time, which began in the wildest, most vivid year of my young life and ended in the year when we discovered we were going to have a baby.

There's something special about touring the way they toured in that time. People in bands meet a lot of people, hit highs and lows, experience the kindness of strangers and reconnect with distant friends. There's a lot of richness in it. And Vehicle, in the midst of that time, is in some ways the sound of all that. It's a still a great record. 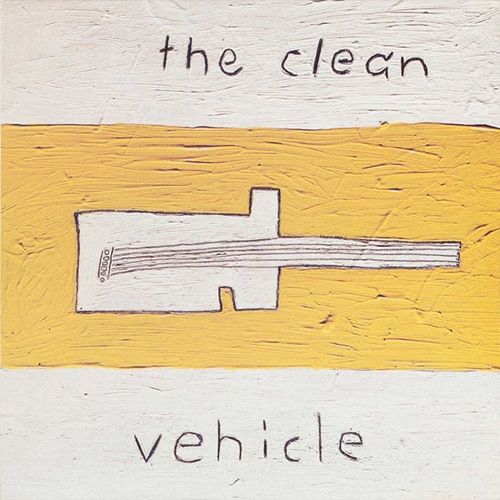 You can order The Clean's Vehicle here at the Flying Out online store.

You can read an interview with David about Vehicle here on the Mess + Noise blog.

You can read Andrew Schmidt's entry on The Clean, with a bunch of great accompanying images, here on Audioculture.

And you can vote here on what colour the forthcoming new Vehicle t-shirt should be. (Spoiler: the only correct answer is "white".)