As every domestic political debate seems to be escalating towards hyperbole and madness, a couple of new media-political tunes have come across my desk. I feel it is important to the nation that I share these.

The first is a rework of John Campbell's brief, unhappy phone call to former EQC minister Gerry Brownlee for Checkpoint. It had a rhythm to it and just for a laugh I looped the "John" "Yes?" part of the video and tweeted it. It was a rough sort of joke, frankly. Fortunately, Wellington alt-pop combo Gold Medal Famous ran with that ball and turned the interview into something really rather good.

And earlier this week, another Twitter conversation led to this brief, bracing punk-rock commentary on the physical condition of Middlemore Hospital, whose title – 'Trade-Offs Between Taxation Rates And Infrastructure Maintenance Within The Health Sector' – takes nearly as long to say as the track lasts.

New local videos! First up, the third single from Julia Deans' forthcoming album We Light Fire – and it's something new from veteran music video director Greg Page, who drew his own animations for the clip. The song itself is a rocking meditation on feeling dread, and further hints as to the range of the album to come. (It's on your streaming service and here on Bandcamp.)

And Dion Lunadon, lately of the D4 again, has a new song from his regular band A Place to Bury Strangers. It's on their album Pinned, which is out today.

The Spinoff's "new Dunedin Sound" story has stirred quite a degree of controversy, not least in Dunedin itself, where many people believe that the batch of surfy-studenty bands it features do not represent the real Dunedin. Some of it sounds okay to me, and I'm struck by how popular it is, as measured by Spotify streams and sold-out shows in Auckland, but it's not really my argument to have. At any rate, there's a sort of balancing argument in the rather good Bandcamp Daily roundup New Zealand Indie: Beyond Flying Nun and the “Dunedin Sound”, by New York writer Nick Fulton.

I'll do a full rundown of Record Store Day happenings in next week's post, but the lineups are taking shape.

My friends at Southbound Records announced yesterday that they've sourced more than 300 RecordStore Day releases, including the remastered vinyl release of Unitone Hi-Fi's Wickedness Increased (only 300 copies worldwide). There'll also be a 95bFM live broadcast from 8am, 50% off second vinyl and free gifts.

Meanwhile, I'm spinning some discs between 11am at noon at Marbecks ... 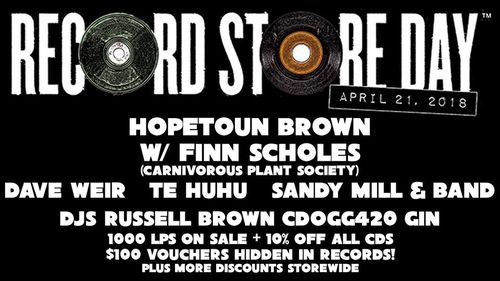 Dudley Benson has marked the tenth anniversary of his remarkable debut album The Awakening by making it a free download on Bandcamp. It's a nice gesture and I think it's not going to be free forever, so ...

And more moodiness and mystery from Jonathan Bree, who has released 'Sleepwalking' as a taster for his next album, which is out in June. I like this ...

The Rock 'n' Roll Hall of fame has been a dubious proposition at times, but anyone who loves rock 'n' roll should be pleased that Sister Rosetta Tharpe is being posthumously inducted next month. There's a great NPR thing on her legacy:

And of course you can never play this video too many times ...

Meanwhile, I can't embed the Facebook video here, but this clip of Garfield Fleming singing along with his own 1981 disco classic 'Don't Send Me Away' at a vinyl flea market is really a very lovely thing.

One more single from Estere's double album My Design/On Others' Lives, which drops at the end of this month. Downbeat styles ...

And a really nice Leftside Wobble rework of Sneaker Pimps' '6 Underground'. Not free, but only £1.50 on Bandcamp.