I confess, it had escaped me that there had not been a Disasteradio album for seven years. It's not as if Luke Rowell had been idle: he's made a bunch of records as his alter-ego Eyeliner in that time. But Sweatshop, the album released this week, has been a looong time coming. I mean, Kim Hill played the title track, the "first single from the forthcoming 2014 album"  in, well, 2014.

But the good news is, Sweatshop is out and it's really wonderful: a funky, infectious record with 80s pop in its heart and vocodered vocals and old-fashioned drum machine sounds all over the shop. What might look mad and gimmicky is actually a box of finely-crafted bangers with a depth that gives lie to its immediate appeal.

Take for instance, that title track. Its refrain references Foxconn and it's born out of Luke's unease that the gear he does his work with is likely the fruit of exploitative labour practices. You'd also totally bop around your kitchen to it.

The songs are more melodic and, well, songlike than previous releases have been – Luke claims the inspiration of Tom Petty, among others, this time around – and I like that too. I'm really looking forward to seeing him play at The Other's Way festival on September 1.

If you can't make that, the other tour dates were announced this morning:

The album is on the streaming services, but if you buy it on Bandcamp and pay more than zero (it's on name-your-price) you also get a download code for the accompanying digital EP of instrumentals, Sweatpants. And Luke actually gets some money to fund his space travel hobby. 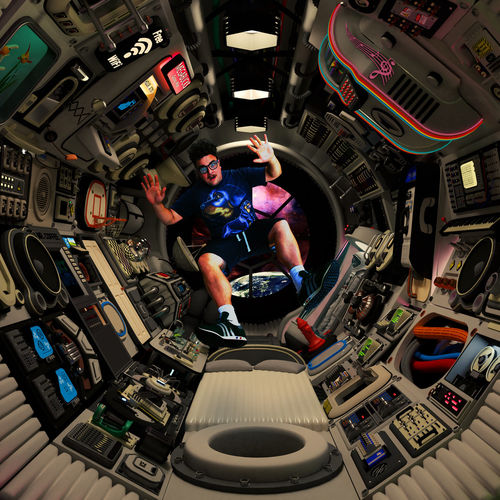 Speaking of which, Luke told me something nice this week. Way back when I my TV show was called Media7, we had access to enough budget for me to commission Luke to rework our original theme music by SJD. And he used that fee to buy the onstage laptop he played every gig with for the next six years. Huzzah!

If only such a thing were possible now. It's one thing paying for the use of music in your productions (a very good thing thing, might I add), but it's even better being in a position to commission work. Back in 2009, Media7 wrapped up its year by commissioning James Milne (aka Lawrence Arabia) to write and perform a song about a media year characterised by apologies. It was a very good song:

From memory, Luke played the season-ender the following year.

It's not entirely unknown now – the new Checkpoint launched with a theme commissioned from James, and the likes of Karl Steven and the Phoenix Foundation writers have forged parallel careers in writing music for the screen. But it does rather underline the way killing TVNZ 7 and freezing broadcast funding for nine years has had an impact beyond the obvious.

The Others Way made its second lineup announcement this morning, adding, among others, Tiny Ruins, Grayson Gilmour, the Friendly Potential crew and, yup, Eyeliner. Luke Rowell is going to be busy.

And tomorrow night, I'll be DJing with the brilliant Sandy Mill in the courtyard at Golden Dawn while Hopetoun Brown play inside. We'll be on the decks until 2am, so you if you're watching the rugby, you could still swing by before or after. It'll be funky!

One thing you can't accuse Lorde of is laziness. I don't quite get how she does it, but here, exactly two months after the release of Melodrama, she is returning to Electric Lady studios for Homemade, a "reimagining" of songs from the album, captured to video.

I like this for a couple of reasons. The first is that although I really enjoyed Melodrama, especially the back half of it, I did stop listening to it for a while out of fatigue at the loud pop production. In Homemade, the songs are stripped back and performed with acoustic instruments and a choir. It could be pretentious, but it isn't. The second reason is that it makes up for that diabolical video for 'Perfect Places'.

The singer talks about why she did it in an introductory video interview. Some songs work better than others. 'Writer in the Dark' was always going to be a starter, but I also like 'The Louvre', not least because the arrangement calls for French horns on the coda at the end. Cool.

Meanwhile, she's on her world tour, and here she is at Outside Lands festival in San Francisco, bringing Jack Antonoff on stage to play Paul Simon's 'Me and Julio Down By the Schoolyard'. It's really sweet.

That's a pretty good fan video, but it's also here on the official festival video of the full show.

One of the fun things about Pure Heroine was the sheer number of remixes draped over its bare bones. Many of them were not good, but some of them were really good. Melodrama, which fills a lot more sonic space, is thus far not as fruitful. But its most spare track, 'Liability', has given rise to this lovely, dreamy hiphip version. It's even a straight-up free download.

Northlander WhyFi, an ally of Auckland Grow Room collective (The Wireless did a nice profile on him) dropped this track this week. The lyrical theme is dark, the bass is low and the tempo is loping. It's good.

In celebration of the solar eclipse visible in across America last Monday, some techno-hippie guy made a take on Pink Floyd's 'Set the Controls for the Heart of the Sun'. The tune and the lyrics make several appearances but it doesn't sound all that much like the original. It's groovy though (and a free download):

A Nina Simone edit with a dressing of Grace Jones:

And RocknRolla Soundsystem roll back with this thumping edit of Robert Palmer's 'Sneakin' Sally Through the Alley'.

Those last two aren't downloadable yet, but they seem to be lined up for a free Nu Blends compilation out next month.