Sunday's Public Address Radio, 7pm on Radio Live, is the final, ending a five year run. NZ On Air's radio funding priorities are elsewhere now. But I can't complain: it's been a good run. The last show features a farewell from Craig and a selection of excerpts from some of our better stories and interviews, representing the mix of science, arts and humour that underpinned the show. Damian and I are the hosts and Julia Deans plays us out.

There are a lot of people to thank, so I'll keep it to two: our producers Glynis Bartlam and Thomas Watts. Good people.

Thom is working on a compilation of our in-studio musical performances -- from Lawrence Arabia to Pikachunes and Dave Dobbyn -- which we'll give away here when it's ready.

Also in progress: video from last week's awesome Orcon Great Blend. David Haywood -- whose talent is apparently unbounded -- is working on editing up video of his own pants-wettingly funny presentation, and my friend Ross Williams is putting together some of the rest, including Emma's story. It's not exactly a six-camera shoot, but I'm glad we did actually remember to point a camera at it this time. Thanks, as ever, to Malcolm Ibell, who made sure we had good audio recordings to sync to the pictures.

Blair Parkes' deeply moving multimedia work, Chimney Book, will also be available soon. Blair and I agreed it needed to be in a good-quality setting, so I've arranged for NZ On Screen to have it exclusively online. It will also be part of a NZOS collection presented next year around the anniversary of the February 22 earthquake.

Readers may recall that my musical medal-winners last year were women (well, apart from the drummer in Street Chant, who is arguably the prettiest of the lot). It would be fair to say that, in a wholesome and musical way, I love the ladies.

Were I looking for solace in post-riot London this week, I have no doubt I would turn to Mrs Sonia Pottinger. The greatest female reggae producer died late last year in Jamaica, leaving behind some of the sweetest and most soulful music to have come from the island -- or, indeed, from anywhere.

The rocksteady fansite You and Me on a Jamboree has MP3s of a couple of Pottinger-produced compilations, which aren't all that easy to buy. I cannot recommend them highly enough.

A contemporary of Mrs  Pottinger's -- although effectively in another world -- was this lady: 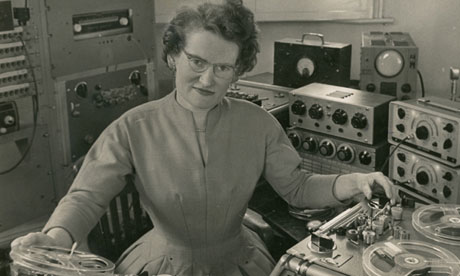 That's Daphne Oram, who, as a Guardian story recently noted, "seems an unlikely candidate for a techno pioneer, but ... her life's work was astonishing." Oram worked at the legendary BBC Radiophonic Workshop and then on her own account, creating in 1957 a system called Oramics, which "played" drawings made directly onto 35mm film.

How did it sound? Here's an except from 'Bird of Parallax' from the Oramics album released several years ago.

The first time I saw a video of Sister-Rosetta Tharpe playing, I couldn't believe it. Here was this matronly woman in a gospel setting peeling off licks that any rock 'n' roll guitarist in any era would be happy to own. And -- here's the thing -- she was doing it before there was any such thing as rock 'n' roll. I can recommend the BBC documentary Sister-Rosetta Tharpe: The Godmother of Rock 'n' Roll should you see it go by on the internet.

In the meantime, check out the lead break she lays into the standard 'Down By the Riverside' (on YouTube, but embedding disabled, sorry).

A bizarre but utterly charming 1964 appearance for the BBC:

And, from 1941, before she got her Gibson SG, a more sensual side with Lucky Millinder's band:

Yes, that is definitely what we fought the war for ...

And, finally, I tweeted this brilliant beat-heavy remix of Amy Winehouse's 'Tears Dry on Their Own' a couple of weeks ago:

It's longer available for download on SoundCloud, but just quietly, I've uploaded it here for you.