Astonishingly, it's only just over a year since a 16 year-old Lorde took the stage for a promotional gig at Vector Arena. It was easily the biggest room she'd played, and a mere four months since her public debut. It wasn't a flawless performance: she started confidently, literally ran out of puff for 20 minutes, then gutsily hauled it back.

"I had no idea what I was doing," she mused to the crowd from the same stage on Saturday night. "I was scared shitless."

She seemed as amazed as anyone else that she had returned as the queen of a powerful,  prodigious arena show full of her own art.

The feat is all the more remarkable because it was achieved with the same musical format she started with: just her up front, Jimmy Mac on keyboards and Ben Barter on drums. Back then, that seemed to be a PA lineup; a way to get her out singing her songs until a full band could be assembled. Turns out, that is the band.

The songs have evolved: most notably 'Team', now an eight-minute live barnstormer, and the changed-up 'Royals'. But what's really changed is Lorde herself. She's a year older, and stronger in every way.

The big gain in stagecraft evident at the Silo Park show in January has continued: when she hit her mark at the end of 'Buzzcut Season', turned to profile and shucked her jacket in the last-second silhouette of the spotlight, it was pretty much a perfect moment.

Her voice, which has suffered at times under the stress of touring, was notably strong. At times a year ago, she'd get rushed by her pre-recorded backing vocals. Now she seems to hit them when she wants to, or divert from the studio versions of the songs to riff or growl when she wants to do that. She doesn't bother to sing sweetly all the time either -- she virtually snarled her way through a cover of the Naked and Famous's 'Young Blood'. (In Wellington she played 'Buffalo', to the considerable excitement of the Phoenix Foundation members in the house.)

The tour show is basically a three-act play containing several set-pieces. And given that Saturday night in Auckland was the last night of the tour, it wasn't surprising that the major set-piece, the 'Ribs' speech, was devoted to the homecoming:

But for all that coming back and ending it Auckland was special and the atmosphere was amazing, the show still had to contend with the sound issues of Vector Arena. It was plenty loud, but at times the bass was overwhelming -- not a smartphone in the house had a mic that could cope with it and it seemed a bit much much for the little girls sat in front of us. So if Auckland had the homecoming factor, the last-night-of-the-tour emotion and the biggest, loudest crowd, I suspect Wellington got the better-sounding show. So here's a video of 'Yellow Flicker Beat' from Friday night.

Here's to Ella's extraordinary year. I hope and trust she'll be taking a good, long rest from the clatter and clamour. And, of course, plotting her next thing ... 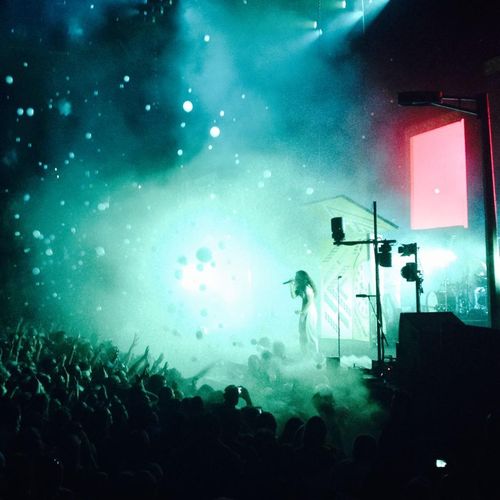 It's been a busy week of live shows. Last Wednesday night was the Critics' Choice section of the Vodafone New Zealand Music Awards, the annual secret-judge annointing of the upcoming talent. In this post-Lorde year, all three finalists were solo artists with minimal or no accompaniment.

Lake South, up first, is an odd fish. After years in indie bands (most notably Urban Tramper) the Wellingtonian found himself making bedroom electronica out of songs he'd written on his acoustic guitar. To his own professed surprise, people thought the stuff he made was great, meaning he had to work up a few more songs in this unfamiliar style,  to play the Critics' Choice. It's a work in progress and he was awkward and apologetic between songs.

But when he was performing? He was confident and compelling, at times electric, and the songs came together as a kind of literate electronica. I very much reckon he should stick with it, tighten things up between songs and work up a bit more stage patter.

By contrast, Randa, the North Shore pop-culture rapper, was born into beats and samples, provided on this night by his producer-accompanist Totems, who turned knob-twiddling into a whole-body dance. Which was nothing compared to Randa himself: I haven't often seen a performer just plain bring it, to the point of breathlessness, like Randa did on Wednesday night.

I get why Randa doesnt want to be defined by his genderqueer status, but it's going to be hard to avoid talking about it, because it's part of how he projects as a performer. Sometimes, he's like a wild 13 year-old boy, and it's honest and appealing, even unto the culturally-acquired American accent.

Last up was Estere, who is in many ways the most accomplished of the three finalists. She's relaxed and assured in controling her onstage gear, comfortable talking to the crowd and can really sing. Before the show, I'd expected her to be named the winner. But it felt as if -- on contrast to her much-talked-about support for Erya Badu at The Civic --the King's Arms wasn't really her place.

So Randa it was, and that was a popular choice. Here's a nice little video from the evening by AUT's Te Waha Nui, set to Randa's 'Rangers'.

The next night was the 49th annual Apra Silver Scroll Awards, staged in Wellington this year with Luke Buda as musical director. It was as congenial as ever, but I was also reminded that it's an event that takes creative risks that others (most notably those from the public sector) would baulk at.

Michael Norris's ‘Inner Phases’, the winner of SOUNZ Contemporary Award, was re-interpreted on the night by longtime improvised music champ Jeff Henderson as a squall of electronic noise, panning left and right across the room. Some of the crowd loved it (me included) and others put their hands of their ears.

You could say much the same of Dean Hapeta's revolutionary speech before the presentation of the Maioha Award, which I gather didn't impress Minister Maggie Barry (to be fair, the minister's attempt to claim North Shore homie rights with someone called "Ella Yelich O'Connell" didn't impress me). We live in times when sometimes it's worth challenging people, if only to assert that we still can.

In the end, the Silver Scroll went to Tami Neilson, for her blues belter 'Walk Back to Your Arms', which also received my favourite cover interpretation on the night, in being performed by a gamelan orchestra with Gareth Farr and the All Seeing Hand's Johnny Marks, who did part of his vocal as a convincing throat-singer. It really was quite wow.

And finally, thanks to Hugh Sundae at the Herald for bundling up the Hall of Fame content Douglas Lilburn -- speeches, performances, the lot --- and sending me the embed code so you can see it here.