When Justice minister Simon Power called for a review of options for reining in the "Wild West out there in cyberspace", you could virtually hear the blogosphere shudder.

Power's characterisation of the purpose of the review seemed entirely negative -- and it dwelt on problems that, while difficult to address at a practical level, seemed largely covered by existing law, and beyond the purview of a mere media regulator:

"Issues I'm concerned about include how trials can be prejudiced by information posted on websites and seen by jurors, real-time online streaming of court cases, breaches of court suppression orders, and re-publication of a libel."

What the Law Commission has come up with in the discussion paper published today, The News Media Meets 'New Media' (there is a summary here) is more nuanced and, in a striking contrast with the minister's brief, considers the rights of the news media as much as it does the media's responsiblities. Or, as one passage in the paper puts it, the "privileges and accountabilities" of the news media -- whatever the news media actually are.

Further, the paper's proposed answer to the question of whether online media should fall in the jurisdiction of the Broadcasting Standards Authority or the Press Council is: neither.

This is actually the big kahuna in the paper, and I'm surprised it hasn't been highlighted more in early reports. The paper proposes a new regulator to cover all media, one that "should be truly independent, both from government, and also from the industry itself."

Yes, it's calling for the abolition of the BSA, a statutory regulator, in favour of an independent body:

But this wouldn't be business as usual for the Press Council either.

If anything, the proposed new regulator woud look more like the Advertising Standards Authority, with its substantial representation of the public interest and demarcation between its standards authority and its complaints system.

The Court Report on Thursday evening will be looking in more depth at the technical detail of this proposed new body. Media7 will take a more journalistic tack, with an interview I conducted last week with the Law Commissioner, Professor John Burrows, to be followed by a panel discussion with Bernard Hickey of interest.co.nz and one other to be confirmed.

We'll discuss Chapter 3 of the paper, which outlines the privileges in law extended to members of the news media, including specific exemptions from the Privacy Act and the Fair Trading Act, and various rights of attendance. (If you are surprised at the extent of these privileges, you are not alone.)

And we'll look at Chapter 4, the most interesting part of the paper for those of us publishing via blogs and social media, which examines the case for bringing those platform under the scrutiny of a regulator. Happily, it acknowledges that traditional ideas of a standard of balance don't fit the commentators, analysts and polemicists of the blogosphere. (And if anyone proposes BSA-style policing of the language I may choose to use here, they can fuck off.)

No doubt in theory a person targeted by a blogger has ample opportunity to respond by way of defence and counter-attack. But given the uneven power balance between that aggrieved person and the author of the blog, it is often unrealistic or even counter-productive for the individual who has been harmed to engage in an online dispute with the blogger. There is currently no avenue of complaint and no way to correct damaging and untrue content unless that content meets the high threshold to bring a civil action against the publisher.

This is the area that I don't think some stakeholders have fully grasped. In Stuff's story Cameron Slater implies he'd seek to be covered by such a new regulator because, well, it would make him important:

"When you make that choice your credibility goes up. If you choose not to belong, then your opinion is rated as something akin to blogs on knitting patterns."

Given the quantity of material published by Whaleoil which could be considered harmful in the sense in which the Law Commission sees it, I suspect he'd be in trouble almost immediately under these rules:

And here's another thing: we'd be responsible for everything published on our websites. If David Farrar wants the rights of access that pertain to proper journalists, he might finally have to accept more responsibility for comments published on Kiwiblog.

Of course, both of them could simply decline to play. The paper proposes two models for coverage by the new super-regulator, both of which effectively require bloggers to volunteer to be covered:

Membership should be entirely voluntary. Publishers who wish to have the legal standing of news media would join, because only by being subject to this complaints body would they meet the statutory requirements of “news media”.

Membership should be compulsory for some categories of news publishers who meet a proposed set of criteria including for example:

– those for whom publication is undertaken as a business or commercial activity;

– those who are providing broad or general news services to a wide public.

Membership would be voluntary for others.

The principle here is that coverage should not be determined by technical platform -- currently, for example, a video is subject to the BSA if it appears on TV, but not on a broadcaster's website -- but by purpose and "the intent of the content creators ."  Some uses of Twitter -- the example of a politician with a Twitter account is offered -- are akin to the issuing of press releases, and others are clearly non-journalistic in other ways.

4.160  It is reasonable to assume news organisations publishing on these platforms are accountable for applying the same journalistic standards for publications in these social medium as on their websites or traditional platforms. In effect they are using Twitter as an unmediated news wire service.

4.161 Individuals who are not formally attached to traditional news organisations may also use these new mediums for journalistic purposes – i.e. to disseminate news and commentary on current affairs to a public audience. In some contexts, depending on the public interest in the content broadcast, it may be appropriate that such an individual would have access to journalistic defences in a defamation action for example. It is less clear that such an individual should be caught by the broader systems of privileges and accountabilities that apply to those for whom the gathering and dissemination of news is their primary purpose in publishing.

There will be border issues galore, and head-on collissions with te internet's culture of anonymity. Not everyone will be comfortable with the proposals in the paper, but the Law Commission has, I think, admirably fulfilled its brief of providing a basis for discussion.

And, finally, the role of a free and robust press in a democracy is strongly and repeatedly emphasised in this discussion paper. Given that the minister who commissioned this review did not think to say so, I am particulary glad the Commission has.

You're welcome to join us for the Media7 recording on Wednesday, at our present home at the AUT studio. Arrive from 5.15pm for a 5.45pm start.

The entrance is on the corner of St Paul Street and Governor Fitzroy Place, ground level, AUT Art and Design Building: 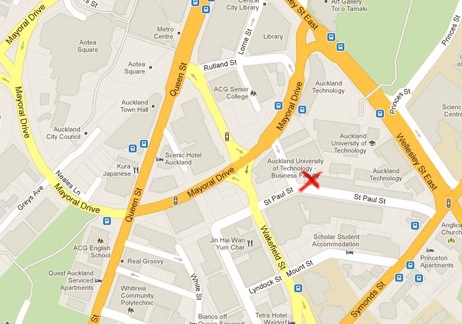