It hasn't been a good week for YouTube. It's not the content: that continues to be added at a rate of hundreds of hours of video every minute – and a billion hours of YouTube video are watched every day. It's not the audience, which now stands around 1.3 billion, or about a third of internet users. It's the advertisers.

In the US, AT&T, Verizon, Starbucks, Pepsi, Walmart, Johnson & Johnson and others have pulled their ad campaigns from YouTube. Across the Tasman, Bunnings, Foxtel and Caltex have done the same. Hundreds of other companies are heading for the door. This global advertiser exodus has been building since The Times published a story last month showing the way big brands have had their ads placed against videos promoting Isis, or from neo-Nazi groups: Alex Mostrous, the Times investive reporter who leading the story, has been covering the fallout via his Twitter account – and lordy there's a lot of fallout to cover. And not only from big companies. The British government pulled all its YouTube advertising after this Times story showed its advertising budgets were being spent on ads accompanying videos by "rape apologists, anti-Semites and hate preachers". 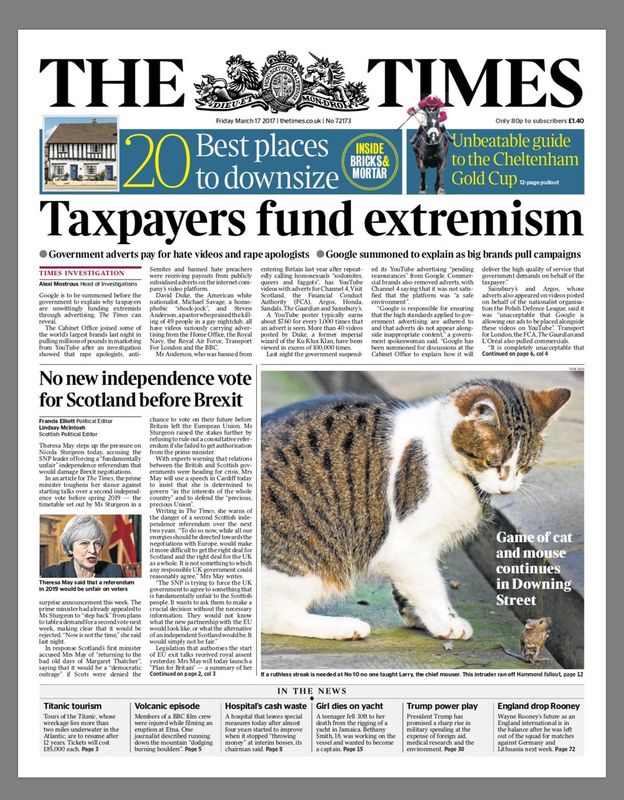 But it's worse than simply being next to bad people. Google runs a revenue-sharing scheme with its video "creators" – they get a slice of the spend. So the British government had been paying terrorist sympathisers for their  videos. And YouTube itself does the transactions.

In the wake of the Times story, rival UK newspaper The Guardian pulled its  advertising not just from YouTube, but from the ad networks operated by YouTube's owner, Google – after discovering they were appearing with videos from European neo-Nazi groups. But the Guardian will continue to use Google's DoubleClick network and associated Adx advertising exchange to populate its own pages with ads, because it doesn't have much choice.

This isn't a problem limited to YouTube, or even to Google. It's a problem with the paradigm that dominates internet revenue: programmatic advertising. Programmatic is a ceaseless series of auctions conducted between computers, with two goals. Firstly, to match ads with the "right" viewers. And secondly, to do so at the cheapest possible price.

On the surface this is an advertiser's dream. Conventional publishers find it hard to match Google and Facebook (and their manifold associated ad networks) for both demographic sizzle and price. They have little choice but to, like The Guardian, get with the programmatic and let the competitors destroying their businesses place their ads too.

But programmatic advertising is run by machines without taste or judgement. It's vulnerable to manipulation and struggles with traffic exchange systems that are sometimes little more than scams. The fake news phenomenon is strongly tied to this kind of manipulation – it has effectively turned the internet's own revenue model on itself.

A couple of weeks ago I let a company I have some dealings with know that its ads were appearing on the notorious fake news site USASupreme. My friend there said "bloody marketers" and thanked me, but there's no guarantee it won't happen again on another website. I checked USASupreme this morning and it showed me ads from Jetstar and Jucy Rentals: 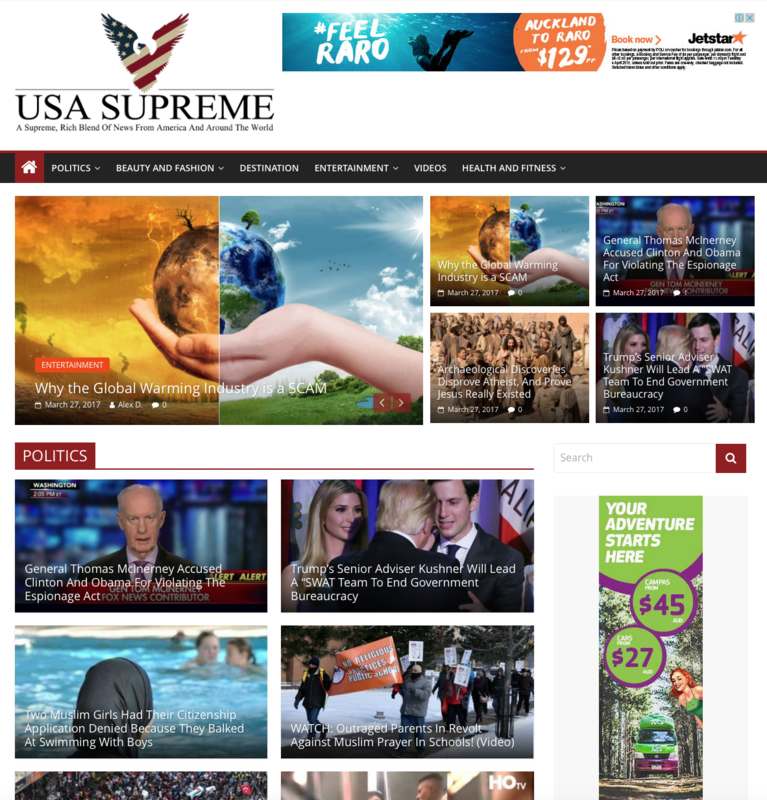 USASupreme has spawned any number of bogus stories and conspiracy theories, but it isn't actually a Nazi site or a terrorist hotbed (although it could be a Russian disinfo asset), so perhaps those two companies are happy emough to be there. Others won't be.

YouTube, ironically, was supposed to be better than that. It has its extraordinarily sophisticated Content ID system that identifies the owners of copyright material (music in particular) and allows them to share in its advertising bounty (about two billion has been paid out since Content ID launched). It has systems which annoint high-quality advertiser-friendly publishers, who attract a premium.

But those systems clearly don't always work. And screwing them down harder has already had consequences for publishers whose material (say, a video dealing with sexual abuse) might be edgy but is not exploitative, hateful or illegal. It's a hard road back if YouTube "demonetises" your content.

Google says it will increase the human moderation of participating sites, but that faces the same problem that drove the creation of the programmatic system: the sheer size of the internet, the sheer quantity of content looking for revenue and the sheer number of individual publishers. It's beyond the capacity of humans.

Two local internet news ventures, The Spinoff and Newsroom, have turned their backs on conventional display advertising and instead embraced sponsorships from a limited number of companies. The closer relationship implied by sponsorship can be a problem for editors and journalists – but it's arguably a lesser problem than those that come with the low-value world of programmatic.

UPDATE: This Bloomberg video has some useful commentary and numbers to set this all in context:

I'm interested in New Zealand companies' advertising turning up in the wrong places. If you spy something interesting out there, please feel free to screenshot it and upload it in the discussion here. Just use the "choose fil" button next to the comment box (you'll need to have typed something in the box for the upload to work).