Three years ago, Clinton Logan sold all his possessions, leased out his house in New York state and set out on his motorcyle. The New Zealander, who had spent most of the past 20 years building a software company, decided "it was time to recalibrate my relationship with the world."

Since then he has crossed the United States eight times and explored Alaska, Canada and Europe. He spent last year riding, photographing, and writing about his experiences in Latin America.

"This season I've been focussing on exploring the traces of the Soviet Union here in Eastern Europe. Next season I'll probably ride into Russia proper. As you can probably tell I'm just making plans up as I go along."

The words and pictures below are adapted with permission from the personal Facebook account where he records his journeys.

Exploring the ghost city of Pripyat. 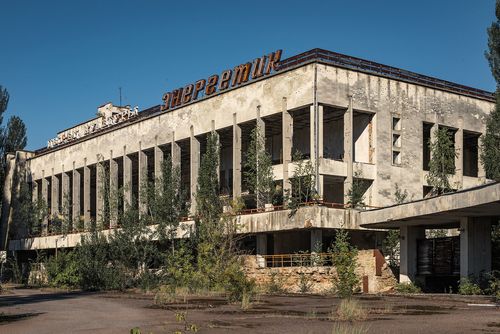 "If we have nuclear weapons why can't we use them?" - Donald Trump

Pripyat was a young municipality, purpose-built to service the Chernobyl nuclear power plant. Like other cities that served the technology industry, it was a planned model that stood as a shining example of modern day USSR.

But at 01:23 in the morning of April 26th 1986, a control room operator named Alexander Akimov punched the emergency shutdown button for Chernobyl's reactor #4 and changed all of that forever. It was an action that would eventually kill thousands of people, force the immediate and permanent evacuation of Pripyat, and ultimately bring about the collapse of the Soviet political system.

Now, 30 years later the area still exhibits dangerously high radiation levels and will continue to do so for the next 300 years. Pripyat is a city that had its future ripped away in a very sudden and dramatic way and for those who are game it represents a unique opportunity to genuinely experience a post apocalyptic world.

The second part of my visit here entailed virtually travelling back in time to photograph the highly restricted internal workings of Chernobyl Reactor #2. It's an exact duplicate of Reactor #4 which imploded 30 years ago and is one of the most amazing spaces I've ever witnessed. 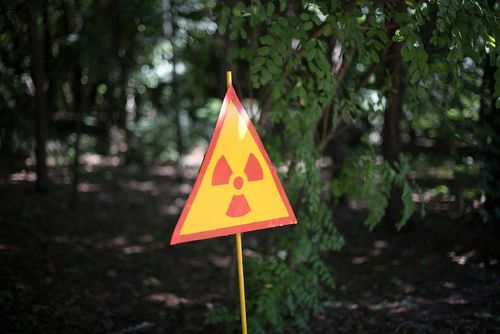 As our 50 year-old Russian UAZ van pitches over the broken streets of Chernobyl, Serhii ends his mobile phone conversation and turns to me.

"You're in. They've given you access to the reactor. We need to be there by noon."

"I do understand and fully realize that staying in the area with high levels of ionizing radiation can cause potential harm to my life and health in the future. I agree to all terms of visiting the exclusion zones and refuse all claims of a legal nature..."

I can barely contain my excitement. I'm not sure how he did it, but I'm about to step back 30 years and experience first-hand one of the most infamous locations held by the USSR.

The Chernobyl powerplant, known as the Lenin Nuclear Power Station during the Soviet era, was undergoing rapid expansion in the 80s. Reactor Unit 1 went online on November  26, 1977, and after months of testing, Units 2, 3, and 4 soon followed. In 1986 the four reactors were providing 10% of Ukraine’s electricity with two more under construction.

In total, the USSR was planning a cluster of twelve nuclear reactors that would've easily made it the largest power station in the world. But in the early hours of Saturday April 26, 1986, it all came to a sudden and very dramatic end.

While the doomed city of Pripyat slept, engineers on the evening shift initiated a safety experiment to determine if the reactor's cooling system could still function without external power. Unfortunately the test exposed serious flaws in both the reactor design and the Soviet safety culture of the time.

A cascading series of events soon culminated in the plant spiralling out of control and the reactor core melting down. The resulting explosion created a radioactive breach equivalent to 400 Hiroshimas that irradiated large areas of Belarus, Ukraine, Russia, and Europe. Two people were killed instantly, with 237 other plant workers being diagnosed with acute radiation syndrome. Twenty eight would die horrible deaths in the following weeks.

Today, the Ukrainian government employs 2500 people and spends nearly 10% of its national budget maintaining the Chernobyl site. Its biggest priority is the ongoing containment of the large amounts of radioactive material that remain in the area. Among the myriad of challenges the government faces is the real concern that a hostile entity could smuggle out one of the thousands of "hot" objects for use in a dirty bomb. To guard against, this three rings of increasing security have been put into place.

The 30km exclusion zone: No one is allowed into this 2800 sq. km area without permission papers and an official escort. There's a long list of rules (no eating outside, no resting equipment in the ground) and a dress code (no exposed skin) that need to be adhered to. You must travel in an enclosed vehicle and motorcycles are forbidden.

The 10km exclusion zone encapsulates the areas of highest radiation: The ghost-scape of Pripyat, which I previously visited, and the Red Forest – named after its population of pine trees turned red and died from the first wave of radiation. To this day it remains one of the most contaminated places on Earth. Employees within the 10km zone have limited work shifts; no more than five hours a day, with 15 days spent clear of the zone for every month worked. Exiting the zone requires you to pass a mandatory radiation scan. According to Ukrainian officials, the area should be safe to inhabit again in the year 4986.

Thanks to my "fixer" Serhii, I've now been cleared to enter the third and most secure zone: The reactor complex.

At 12 noon a government representative wearing a staid grey uniform walks over and shakes my hand. "I'm Marek, welcome to Chernobyl. I'm happy to show you the current state of the site and our new safe confinement project."

(I feel a little overwhelmed to be even standing here right now. I'm not sure who they think I am but I'm rolling with it.)

"You need to stay with me at all times and only photograph the locations I approve of. Do not take photographs of the outside. Do not photograph any workers"

After clearing a series of PIN-protected rotating metal gates I'm confronted by a guard with a dosimeter and blood type info velcroed to his chest. He gestures to feed my camera bag into the gaping mouth of an x-ray machine.

Marek leads me into a pristine grey room filled with white tunics, hats, and shoe covers.

In the corner stands a large blue-grey machine with a human sized slot cut in the side. It's time to take another radiation test. I step inside the scanner, place my hands and feet on each of its four sensors and wait. On the adjacent wall an old sign reads “Let the Atom be a Worker, not a Soldier.” I grin at the irony.

A green light with indecipherable cyrillic text illuminates with a click.

The unmistakable smell of vintage engineering — like the interior of an antique car — permeates the golden brushed-metal corridor of the reactor building. We're all wearing identical tunics, the same as those worn by the operators at the time of the accident. The decor, signs, and equipment — nothing has changed here in 30 years. I'm shuffling through the world's coolest time capsule in a pair of white cotton booties and I think I'm quite possibly high on dopamine right now.

"That's the door to the computer center."

Even if Marek had said this room allows you to selfie the last supper, my anticipation couldn't be greater. The mental image of the 70s Soviet mainframes that lie beyond that thinnest of thresholds is just too much for my inner geek to contain.

Can I photograph it? I ask rather optimistically.

Twenty meters away the hallway is punctuated with a backlit ceiling sign. "БЩУ • II" is stencil-cut from metal alloy in a rad retro modernist font. In a scene lifted from a drive-in B movie, Marek lifts an intercom handset, punches its oversized button, and announces our arrival to the operators inside.

Okay, this is it. This is the reason I travelled halfway across the globe to the Ukraine. We're about to step into the control room of a soviet nuclear reactor. Holy shit.

As a kid growing up in clean, green, nuclear-free New Zealand, news snippets of reactor meltdowns, mass evacuations, and abandoned cities lit up my sci-fi obsessed imagination. I swore to myself that someday I'd visit Chernobyl. As twisted as it sounds, I really wanted to experience first hand the epicenter, and aftermath, of a real-life apocalypse.

Now, after all these years, I'm finally standing in the control room of Reactor #2, twin sister to the one that dominated the news all those years ago. 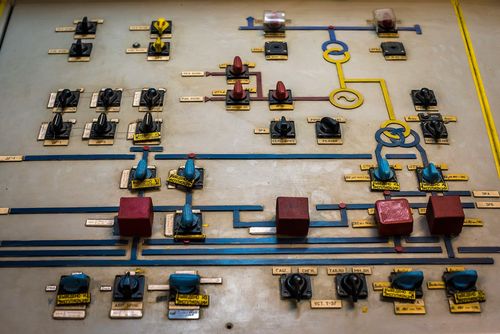 I survey the panoramic array of gauges, lights, buttons, and switches and imagine them all lit up in the constellation of chaos that must've existed that early April morning. Even though the control room is now dormant — Reactor #2 was shut down permanently in the '90s — I could still feel it echoing the confusion and terror of the operators coming to the realization that they'd just lost control of the most destructive force on the planet.

They were going to die and they knew it.

In the weeks following the disaster, Akimov, the operator who'd pushed the emergency shutdown button, was especially haunted by what had happened. As he lay painfully dying in hospital, he knew his theoretically correct course of action had ultimately triggered the meltdown. He just couldn't understand why things had gone so wrong. His wife recollects visiting him in hospital the day before he died.

“While he could still talk, he kept repeating to his father and mother that he had done everything right. This tortured him to the very end. [The last time I saw him], he could no longer speak. But there was pain in his eyes. I knew he was thinking about that damned night, he was reenacting everything inside himself over and over again, and he could not see that he was to blame. He received a dose of 1,500 roentgens, perhaps even more, and he was doomed. He became blacker and blacker. He was charred all over. He died with his eyes open ...”

The lesser-known story of the cleanup crew, or “liquidators,” who entered highly contaminated areas to battle the reactor and greatly reduce the consequences of the accident is riveting in itself. What the world takes for granted is that more than 300,000 men and women sacrificed their health for the sake of us all. If it weren't for the efforts of these brave people the the meltdown would have affected the planet on a global scale.

All told, about 4,000 people would eventually die from the accident, according to a World Health Organization report. Others say this number is wildly low. The official number of disabled Chernobyl rescue workers today in Ukraine is 106,000.

A monument now stands in the town of Chernobyl dedicated to the courage of those liquidators. A chillingly accurate inscription is etched into the front. “To those that saved the world.”

I've been very fortunate to have witnessed the dark consequences of the "worker atom" running off the rails. It's provided a profound appreciation for the potentially insurmountable cost that's associated with our continued use of this source of energy.

I wouldn't have thought it was possible, but my next site of exploration would eclipse even Chernobyl in its display of how tenuous we humans are making life here on earth. In the vast open wheat fields of Ukraine lies a perfectly preserved example of the "Soldier Atom" lying in wait ... 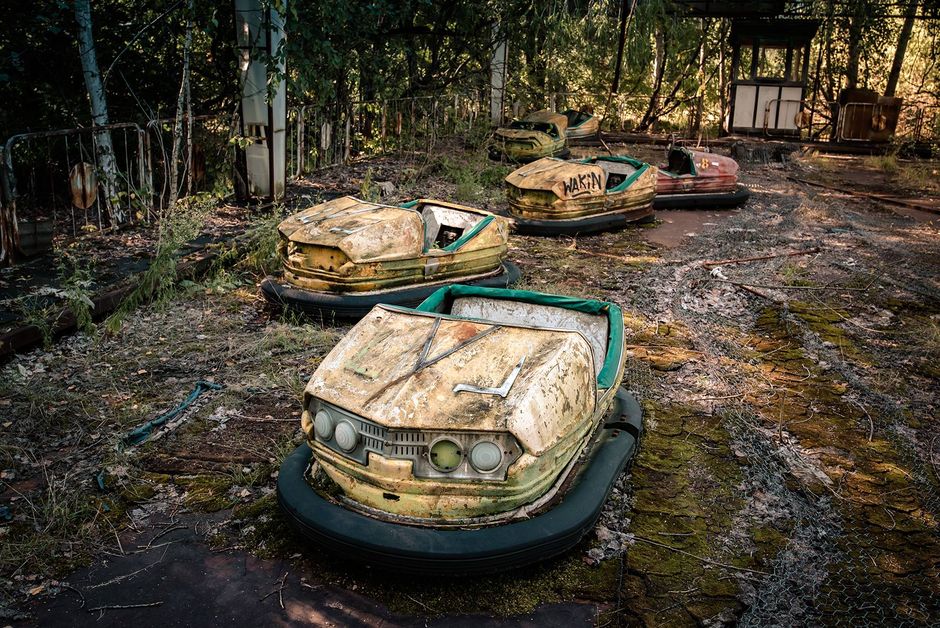 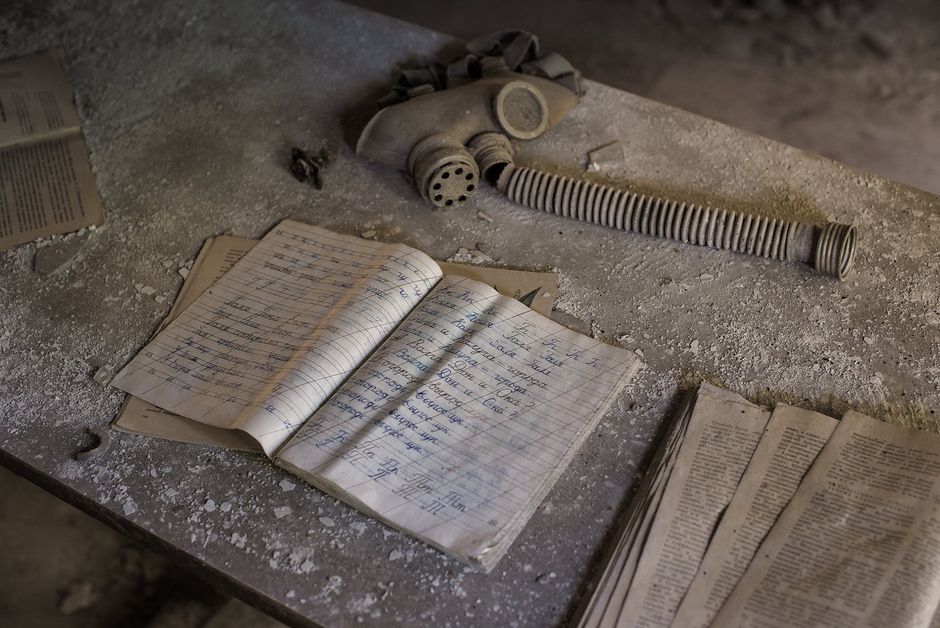 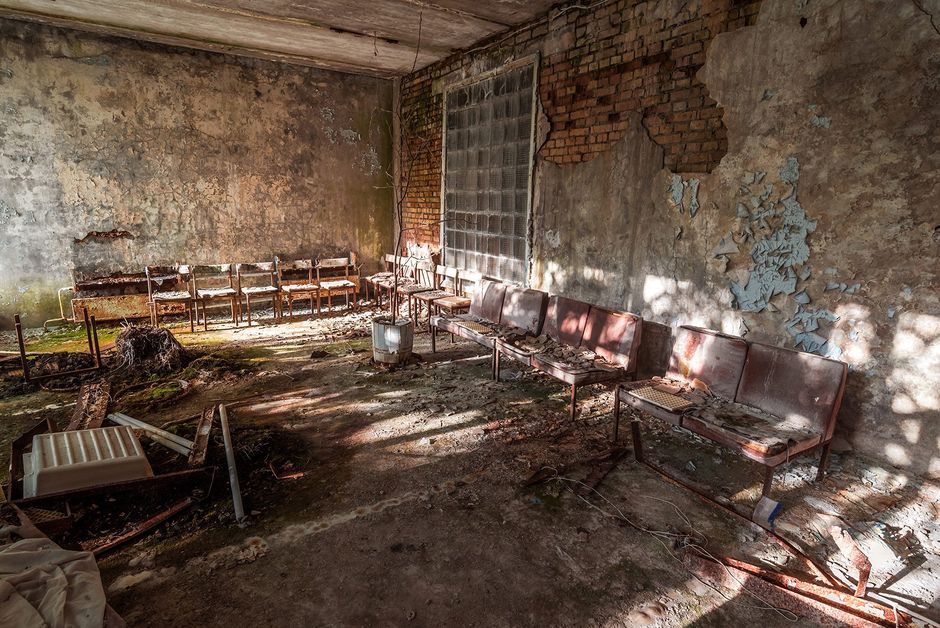 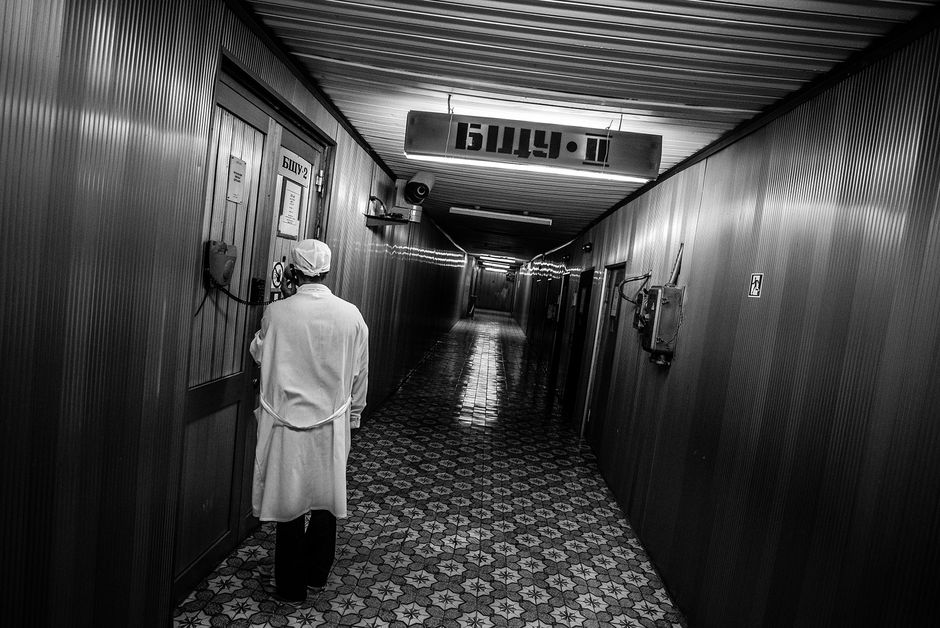 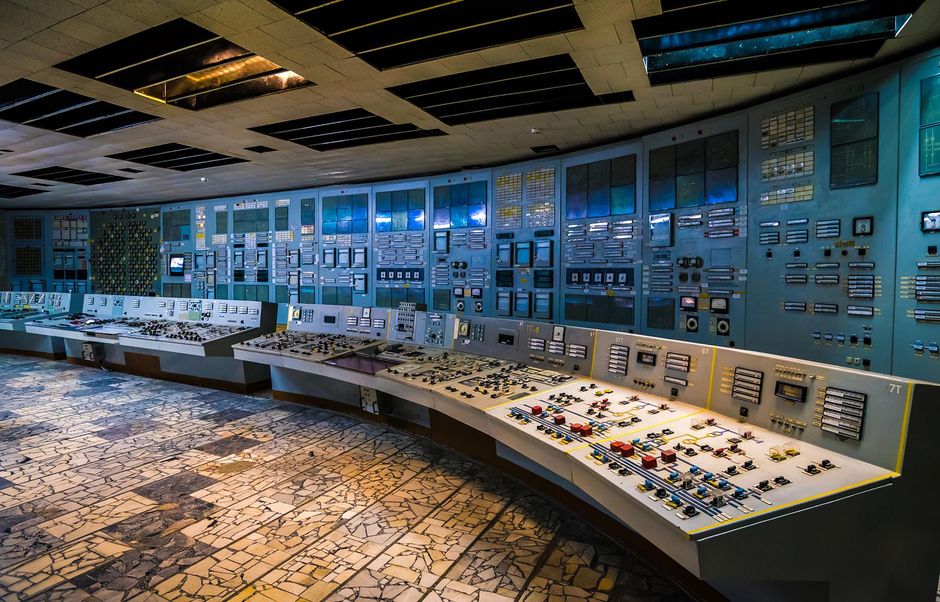 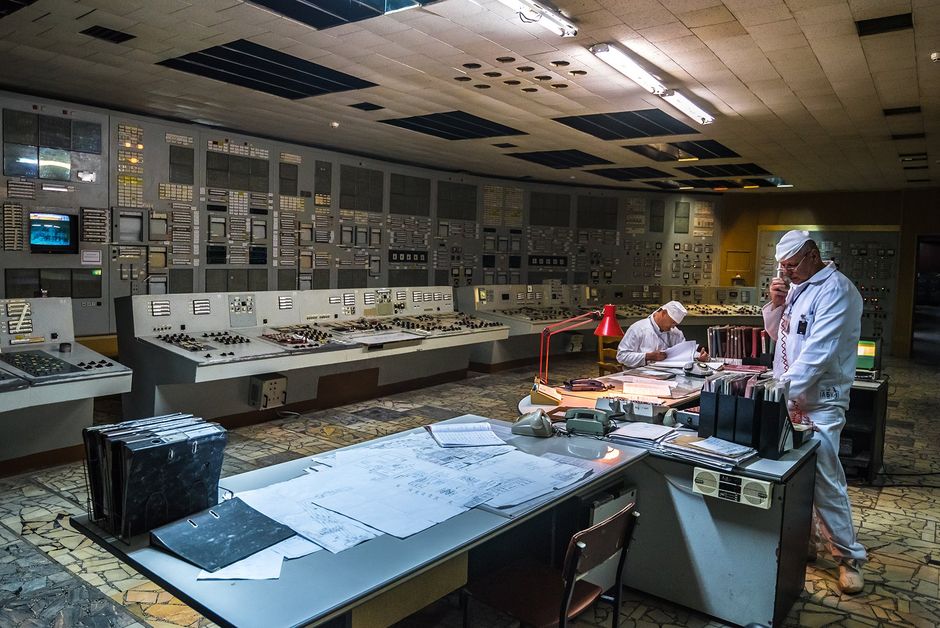 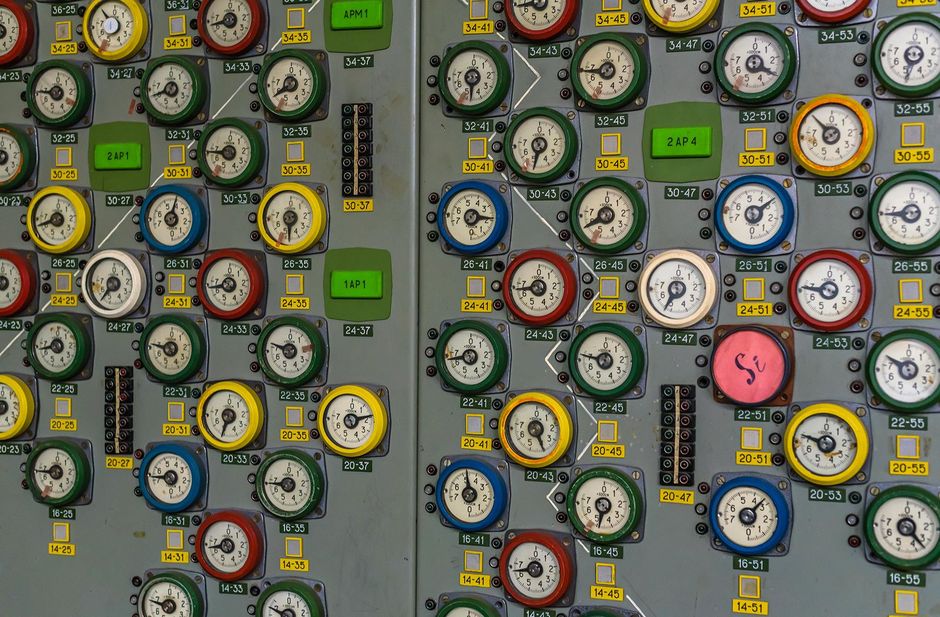 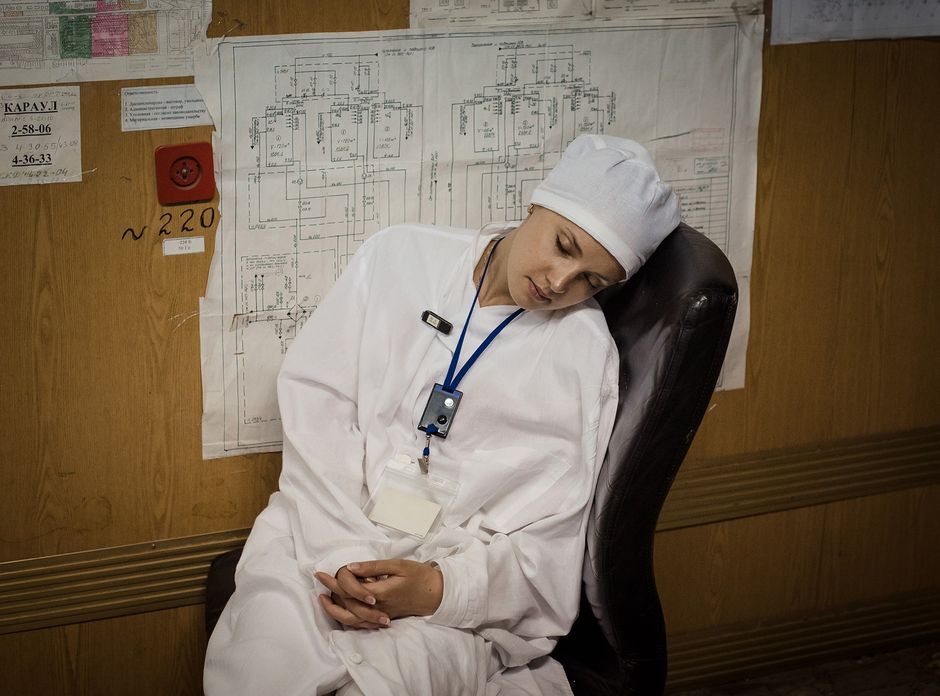 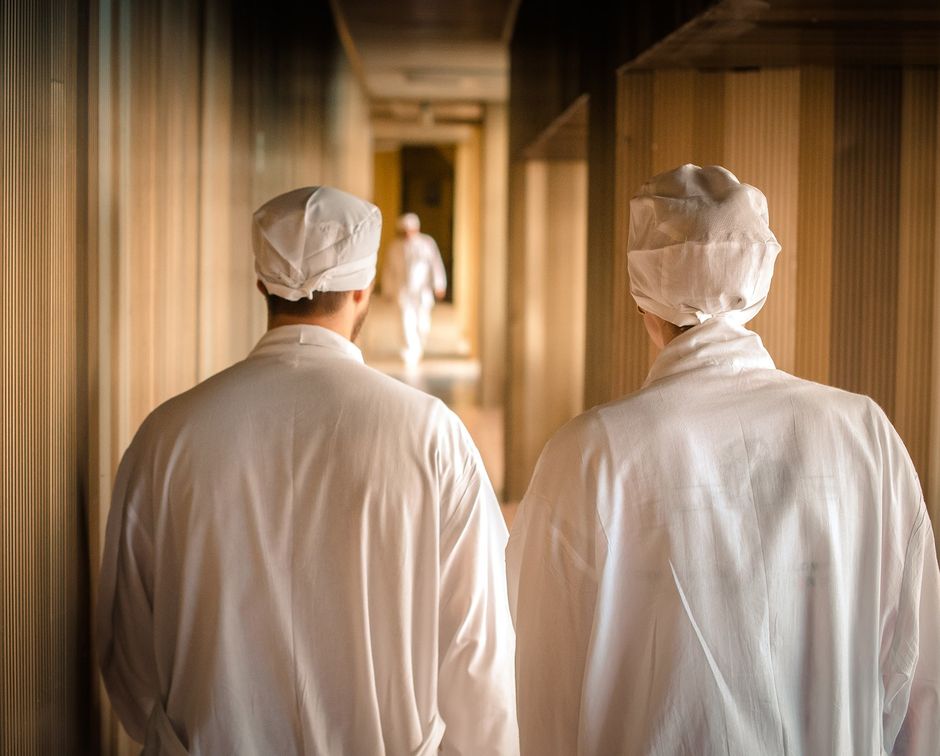 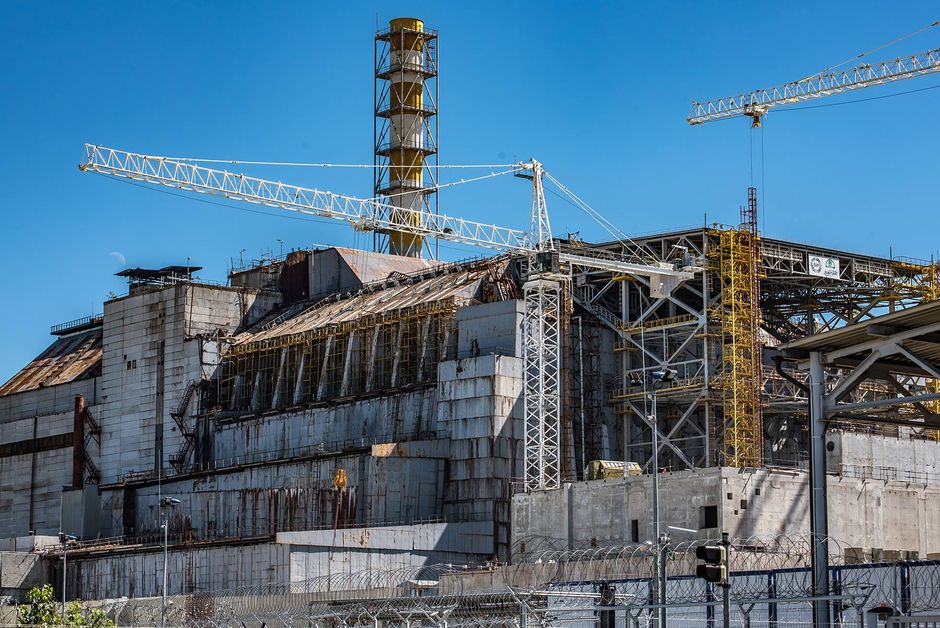 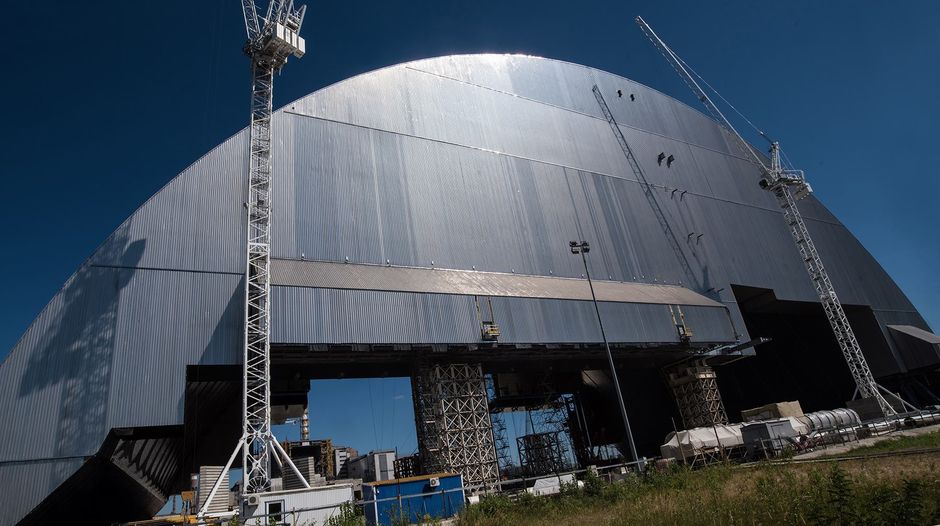 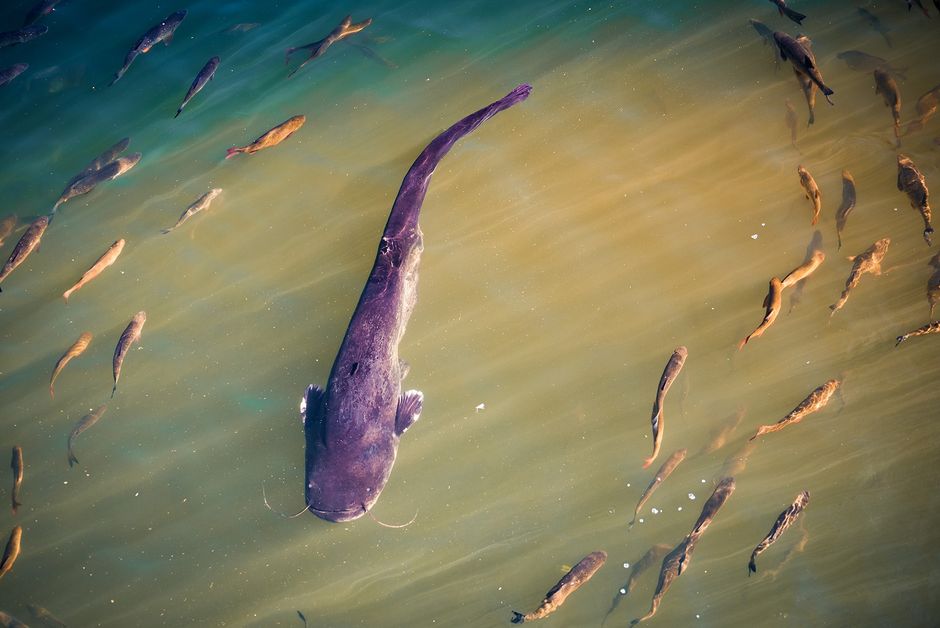