Two years have now gone by since the Friday afternoon when my university-student son and I headed out of our Barcelona flat to a nearby primary school, designated as a polling station for the vote that was to be held the following Sunday: the referendum on Catalonia’s independence from Spain on October 1st, 2017.

Why were we going to the primary school two days before the vote? To keep it open. The Spanish authorities had declared the referendum illegal, and had spent several weeks carrying out aggressive police raids, making arrests and censoring media and internet in an attempt to stop the vote organized by the Catalan government. Yet they had failed.

So now it came down to whether people power could prevail over a central government which had simply turned its back on the whole issue for five years, while a massive grassroots movement had taken root wanting a vote on Catalonia becoming its own independent state within Europe.

On social media in the days before the referendum, appeals circulated to keep the schools and community centres open for weekend activities, so that the police would be legally unable to close them off. And folks turned up, all weekend – at our Escola Drassanes, and at hundreds of other designated polling stations across Catalonia.

Those 48 hours were the most intense community happening I’ve ever been part of in our inner-city neighbourhood. All sorts of people came out of the woodwork and between comings and goings it was a glorious improvised mixture of playing ping-pong, sharing meals and standing up to an authoritarian state. Yes. The last of these, because on referendum day morning, the sense of being under assault was brought to a climax as thousands of Spanish police simply barged in and unleashed violence on ordinary people all over Catalonia. They didn’t stop the vote. They just disrupted it at about 5% of polling stations and bashed a hell of a lot of human flesh.

After that, how could things possibly ever be the same again? How could people carry on supporting a state whose only response to a reasonable democratic demand was orchestrated police violence? It would be turkeys voting for Christmas.

And yet the overall sensation at the close of the polls was tremendous, of having achieved something very important ourselves. The referendum had taken place, and it was not in the end the Catalan authorities but the people themselves who had brought it about and protected it. And gosh, how we celebrated – not only at places like Escola Drassanes, where the police never showed up, but at most of the centres where they did. “Hem votat, hem votat”, people roared. “We have voted, we have voted.”

We're two years on here in Catalonia, and as I write we are awaiting the imminent announcement of the verdicts and sentences in the Spanish Supreme Court mega-trial of 12 political and civil leaders who worked to facilitate the referendum and independence process. And if I am to explain how things are, I’d start by saying that, in daily life, Catalonia is as easy-going and relaxed as ever, in general. But politically, it’s as though we’re simply caught in a freeze-frame of one of those classic referendum images, of Spanish police batons poised in the air, ready to swing down on Catalan voters.

When the images of police violence first went round the world, it was easy to feel that a red line had been crossed: in the heart of the EU, a government was mistreating its citizens and its democracy. So the international community would surely react, and a reluctant Spain, that had buried its head in the sand for five years, would now start to address the problem politically. The idea that the referendum would lead to talks, rather than instantly to full independence, was implicit in the plan.

Yet Spain simply clamped down, the EU didn’t react, the Catalan government lost the initiative while waiting, and the Catalan public, for all its energy, went home quietly at the end of the day as leaders suggested, even on the afternoon when the Catalan Parliament actually made a declaration of independence. On the other hand, the Spanish authoritarian steamroller, which had grunted into life in September to send 8,000 police to Catalonia with their batons and rubber bullets, now gathered speed.

And although so much has happened since then, it has really all been that same photo: the administration of punishment, and the threat of worse. First, via a destructive six-month period of direct rule from Madrid. But mostly through continuing judicial action, justified under the “rule of law” but mostly just criminalizing a whole sector of the population: throwing independence leaders in jail to get them out of the way (denounced as unlawful by the UN, rejected by courts elsewhere in Europe) with hundreds more people either still facing trial or under investigation for their referendum roles. And a complete stonewall, under successive Spanish governments, to even acknowledging that Catalans might have a legitimate political demand – with at least two million voters supporting it, and a vast majority of Catalans telling pollsters they want to resolve the issue through a referendum. Yet the Spanish state’s ironclad constitution doesn’t allow it, so end of story. Spain, under pressure, has simply retreated into the centralist ideology of national unity that Franco left well entrenched at the end of his four-decade dictatorship.

Yet, for all this, many Catalan turkeys are still voting for Christmas. Support for Catalan independence and its parties has not suddenly increased since the referendum; it remains only marginally larger electorally than the anti-independence bloc. So this is another sense in which the situation is frozen: we now have two polarized political blocs, but they don’t engage in meaningful politics on the major issue that separates them – since all the pro-Spain forces, both here and in Madrid, say it would be unconstitutional to even consider it. Meanwhile the independence camp’s actions are constantly stressed by the judicial repression. We’re not going to move towards any solution as long as this toxic political tension is maintained. 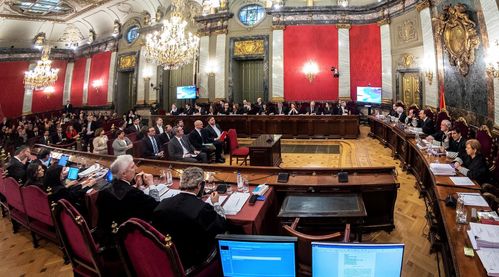 But, glory be, a new phase now begins, and it’s tailor-made by the Spanish authorities to raise the political stress even further: the court verdicts, with a general election to follow a month later. The ground has already been prepared: last month, a 500-officer operation by Spanish police arrested nine Catalan independence activists on extremely vague “terrorism” charges, which instantly sent the entire Madrid-based media and Spanish political parties into feeding frenzy-mode Catalan terrorists! What a coincidence! What better way to prime the Spanish public for the verdicts in the country’s biggest trial in recent history, in which violence is the key point upon which the main charges stand or fall?

The four-month trial of 12 Catalan pro-independence politicians and social leaders was farcical. The principal accusations, rebellion and sedition, respectively depend by definition on “violent uprising” and “tumultuous uprising” from the independence movement. Those never took place, and have never existed in the 21st century Catalan movement. The only violence seen was from the police on 1st October.

Some laws were certainly broken in the referendum process – there was disobedience of court orders, a serious enough matter but not enough to send anyone to prison. But beyond that, the court case showed that the 2017 referendum process in Catalonia managed two extremely powerful things: firstly, it challenged Spanish legality but in a way that was peaceful, juridically smart and based on broad democratic principles; and more unfortunately, it wounded Spanish nationalist pride to the point where the establishment closed ranks and resolved to put a stop to this business, come what may.

Thus, legal experts expect guilty verdicts and sizeable jail sentences for people who have been protagonists of Catalan public life both as capable leaders and admirable human beings. Naturally, there will be a huge reaction from Catalans, both in the independence movement and beyond; new protest platforms organizing mass civil disobedience have appeared in recent weeks, and hundreds of extra Spanish police are once again being sent to Catalonia. The pro-independence parties have been fraught with division lately on where they go now, but, as in 2017, the clumsy action of the Spanish authorities might once again galvanise people to put their bodies on the line to protest the manifest injustice and break the political log-jam. For better or for worse.

And that’s just it: cynical though it seems, the Spanish establishment is counting on the reaction, and counting on being able to control and discredit it. Because the next matter on the political agenda is the Spanish general election, to be held on November 10th. It's a repeat of last April’s election, called by acting PM Pedro Sánchez’s Socialists because they couldn’t form a good enough coalition.

Their clear electoral strategy is now to reject the support from Catalan parties which brought them to power in 2018 and go the other way. They will take a tough line on Catalonia to gain the handful of seats from the right that they need to improve their parliamentary arithmetic. And Spain will see it live on all channels from here until the election. Can plucky Pedro challenge and slay the evil Catalan dragon in the nick of time, bring peace to the kingdom and be crowned new ruler? That reads like a fairy tale of course - and we know about fairy tales.