There’s a never-ending surrealism about life in Bangkok – I'd say Thailand but the two are sometimes only marginally the same thing.

In central Bangkok, a city of close to 15 million, where futuristic skytrains zip past at rooftop level, where some 500 skyscraper classed buildings dominate the skyline, and an increasingly advanced and sophisticated economy has doubled the average income in the past two decades, tens of thousands of citizens now sit outside on the road at six intersections every evening chanting and whistling, hoping somehow to reverse the nation into its recently escaped semi-feudal state.

Four years back, in 2010, as we sat in our townhouse, a department store was aflame some 7 short kilometres away and around it a street battle between the army and parts of the population raged. A year later 16 billion litres of water poured south towards the city and we had – pointlessly – 1 metre walls around our ground floor. As with the street battles, it passed, but more than 1300 died.

However rare is the day in Bangkok where I don’t say myself “I love this city”, no matter how much it challenges you not to. And it does.

In 2010 92 people died, allegedly (the courts have yet to decide although charges have been laid) because a guy called Suthep Thaugsuban, then deputy PM, told the army to shoot to kill, to clear the streets after a 4 month occupation. Snipers, under somebody’s orders, were used against sheltering civilians, in a temple …

The history of representative government in Thailand since the 1932 coup that overthrew absolute monarchy, is both fascinating and unbelievably complex (for more I'd recommend this book, although please don’t try to bring it into Thailand). I won’t even try to explain the mix of brutal factional power struggles, heinous US backed totalitarianism during the Cold War, and intrigue that defined the nation’s body politic until the mid 1990s when democracy seemed to finally gain the upper hand, with a guy called Thaksin Shinawatra winning ballots decisively both in 2001 and 2006.

Thaksin was, and still is, an enigma – a self made multi-billionaire, he’s an odd mix of a self-serving old school despot with serious human rights issues on his slate, and a reforming socialist with policies that gave the long ignored poor but populous north and north eastern regions of the country schools, roads, healthcare and infrastructure. He multiplied expenditure in the regions some 250% in five years and the region is clearly grateful. Much of that gratitude was expressed via the ballot box, and continues to be so. He also treated Thailand as his personal fiefdom, but did so via – however imperfectly – elections.

His power base are loosely called The Red Shirts, or Reds, and their current party is Pheu Thai.

Political power in Thailand has always been centralised around Bangkok and, to a lesser degree, the surrounding southern provinces. It devolves out from the city in feudal manner, descending from the monarchy. Regional governors are appointed and the police and mechanisms of government have little local autonomy. The mind-blowingly wealthy old elite have been joined by a fast growing middle class who number well over 5 million in the city, and an upwardly mobile urban working class of similar size. Bangkok is awash in money and an increasing awareness of its place as one of the world’s great metropolises.

The other major political grouping, which broadly represents this old power elite and much of the Bangkok middle class, especially those over 30, are called the Yellow Shirts, or Yellows, and their party is the Democrats.

This power elite initially had time for Thaksin and tolerated his grand ideas of self, but increasingly balked when he seemed to be both offering up an alternative to the centrist world they had controlled for centuries and – so the meme goes - placed himself in the middle of this alternative as an aspiring “dictator”, although there was little evidence of this. In particular the empowerment he offered the North and North East threatened the Southern establishment and the conservative middle class, a grouping that has traditionally and derisively used the word “buffalos” for the rural and provincial masses who make up 70% of Thailand.

These “buffalos” now have schools, money and fast Internet - and Thaksin gave them more: a political voice.

In 2006 the establishment hit back, and Thaksin was thrown out in a military coup, which eventually saw a rewritten constitution, intended to control the rising red wave, and an appointed administration under Abhisit Vejjajiva and the Democrats. Thaksin – accused of every crime known to humanity by the new junta, with some fairly well substantiated charges of corruption amongst them – fled Thailand, eventually basing himself in Dubai where he still resides.

Following the 2010 blood, a traumatised nation held an election and Pheu Thai stormed into power, taking 48% of the valid votes, in an election hailed by observers and the UN as fair and clean by Thai standards. They were led by Yingluck Shinawatra, a businesswoman with two degrees in Political Science and Business Admin, including a masters from Kentucky State. The problem with this - according to the Democrats who were firmly trounced in the election, and the Bangkok establishment - is that she is Thaksin’s sister.

Fast-forward to mid-2013 (I’m keeping this as uncomplicated at I can) and Pheu Thai, headed by Yingluck, is still the elected government. The demonization of Thaksin by the Thai establishment has accelerated and now includes his sister. Large parts of the south and Bangkok are now convinced that a) Thaksin somehow controls his sister on a day to day basis from Dubai, b) both he and his sister’s parties only received the votes they needed to get in after massively bribing millions of northern voters (they are, after all “buffalos”), c) they have been and are still siphoning billions of dollars out of the country, d) they represent the most evil regime mankind has ever faced, and e) the Pheu Thai voters by and large are too uneducated to be trusted with one-man, one-vote – they need to guided by educated voters, who happen to live in the south. We will call these the “memes”.

History is largely not taught in Thailand, so awareness of past leaders is limited.

The biggest problem the Democrats – and by extension the established elite – now face is that they are simply unable to win an election. They do not have the numbers and they haven’t won an election since the early 1990s. Mild panic sets in, supported by the growing currency of the memes, but everything remains stable (relatively) until Yingluck badly miscalculates: she introduces a bill to create a general amnesty with the stated aim of reconciliation. The net is wide enough to allow Thaksin to walk away from his post-coup politicised convictions and return to Thailand.

Yellow Thailand erupts and the bill is eventually defeated in the upper house and withdrawn, but it's too late. Bangkok - or at least parts of it – is a-frenzied and the previous deputy PM, the aforementioned Suthep, sees his chance. A old school scoundrel with an appalling history of misbehaviour, thuggishness and corrupt practices – plus those hanging murder charges from the 2010 confrontations – he reinvents himself as the champion of reform and democracy and enters the fray.

It gets worse for Yingluck – another bill targets the upper house. 50% elected and 50% appointed (by the elite), she attempts to convert it to fully elected, something that logic steeped in democratic processes would deem to be the right thing to do if the country is to move on, but, supported by the growing currency of the memes, the yellows see it as an attempt to remove the checks and balances that restrain a deeply corrupt red regime.

From there everything has escalated, and if it wasn’t for the sporadic violence and the damage it’s now doing to Thailand’s still robust but threatened economy, it would be easy to paint the marches and so called shutdown as somewhat absurd.

In a city with some 13 million Facebook accounts and about a million twitter accounts, plus a range of hugely popular Thai language sites, social media has gone berserk in every language you can name (Bangkok has a population of expats and foreigners well into six figures) and it dips regularly into the insane and inane, with conspiracy theories whipping around the city at cyber speed. The memes – never questioned by the protesters – have become the tool Suthep and the others controlling this frenzy, use to demand not only Yingluck’s resignation but her and her family’s ‘eradication’ from the nation. The memes have become the Kool-Aid to Suthep’s Jim Jones.

Suthep and his grouping of old rogues, most ethically little better than Thaksin and with far worse democratic credentails, demand an appointed council – who will be appointed to this council is grey – to *reform* Thailand and run the place until such reforms can be enacted. That Suthep had years in parliament to do so and made little effort to do more than enrich himself is never mentioned. Nobody seems quite sure what these reforms look like.

Looking more and more like an ascendant Mussolini, Suthep stands in front of the faithful nightly and rages about Yingluck. Each day he wanders the streets, albeit with shrinking numbers of supporters. Women line up just to touch him and hand him money. He takes vast amounts of cash from the faithful, all of which is stuffed into plastic bags never to be seen again. He’s ringed by dozens of guards more and more reminiscent of an Iron Guard and as he walks he stops periodically, clenches his fists, raising them to the sky – whistles erupt, more women reach out at him and more wads of notes are transferred.

Polling puts his base at around 10% of Bangkok – less outside the city – and yet to the hypnotised he’s the undisputed voice of the people. A complicit media including the yellow’s own TV channel, routinely broadcasts his claims of millions of attendees – physics and independent analysis put the numbers more correctly in the low hundreds of thousands at their peak and now in the tens. The touted Bangkok shutdown is more a minor Bangkok inconvenience in most of the city.

Politically, though, the game is more complicated. The government are heading towards a new easily winnable election on February 2nd – supported by the mass of the electorate who want to be able to vote – however, with an overhanging fear that the military might stage yet another coup, an increasingly radicalised and violent element in Suthep’s mob doing everything it can to shut the country down and interfere with the electoral process, and an awareness the reds simply won't allow a yellow takeover, there are so many variables that it could go any way, and it could flip violently when it does.

We wait, and as I waited I took some photos. 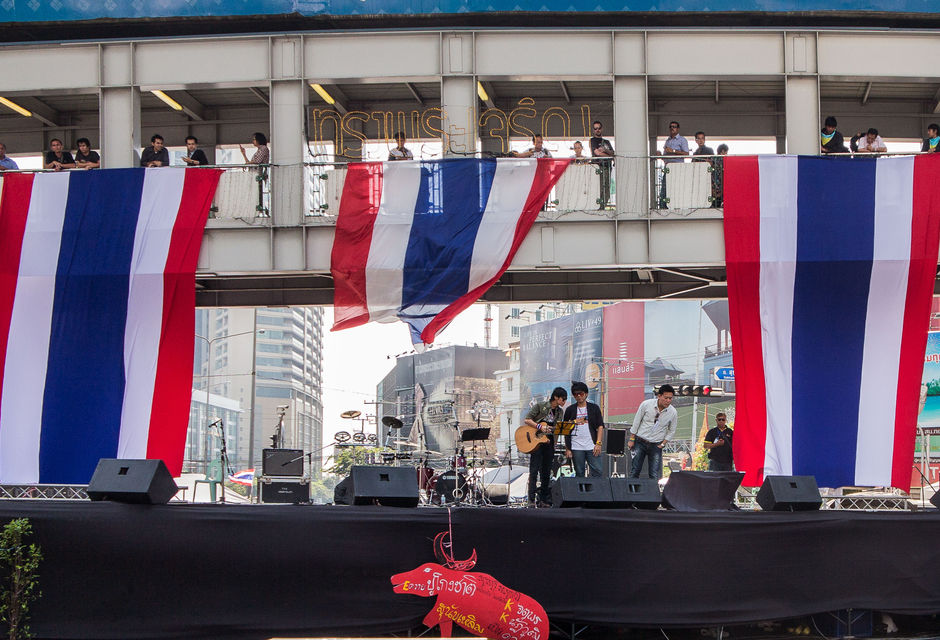 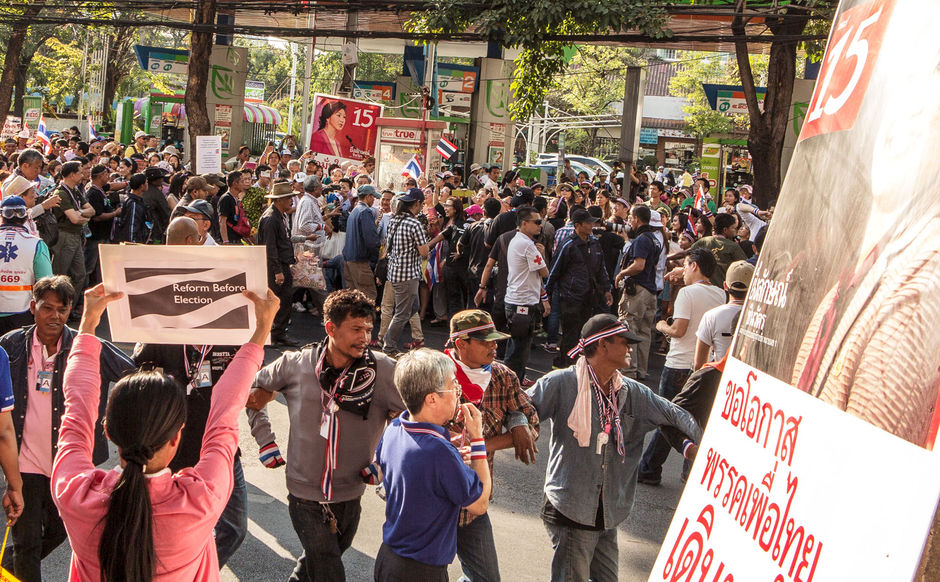 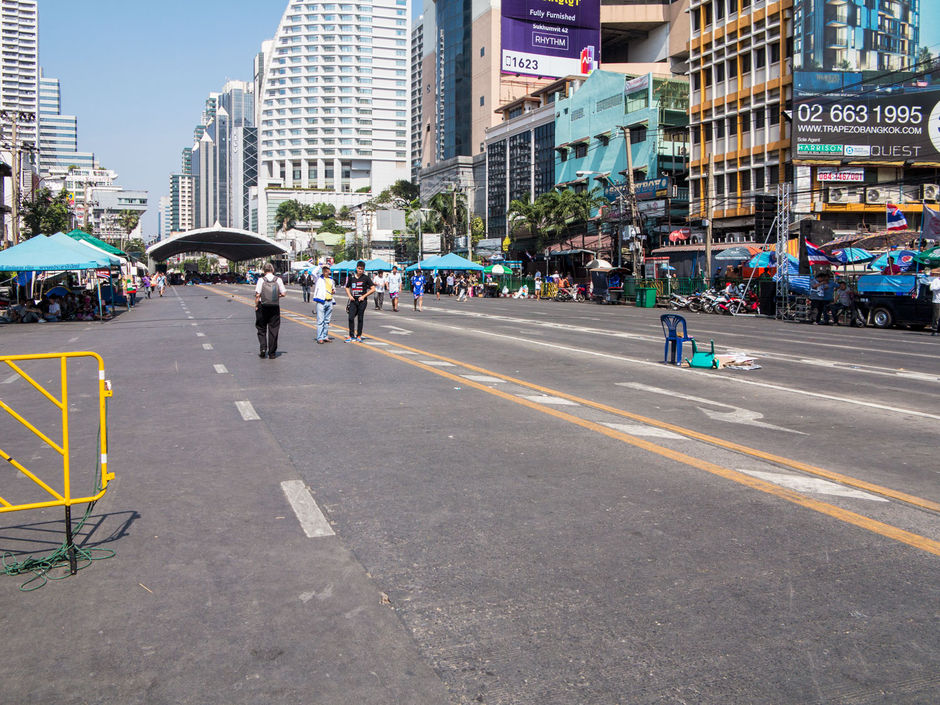 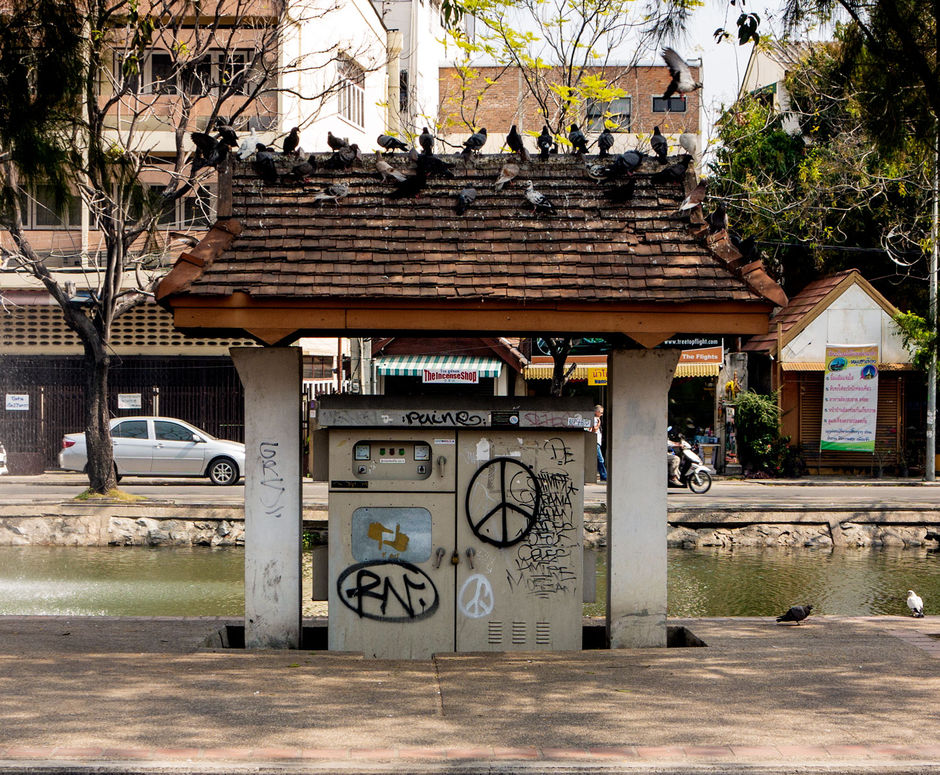 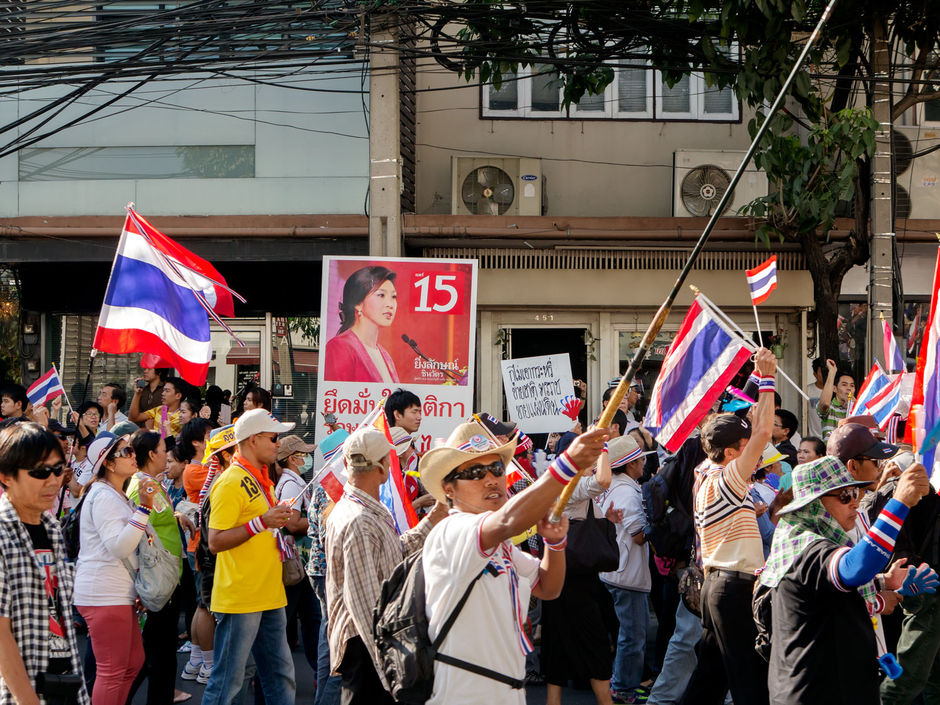 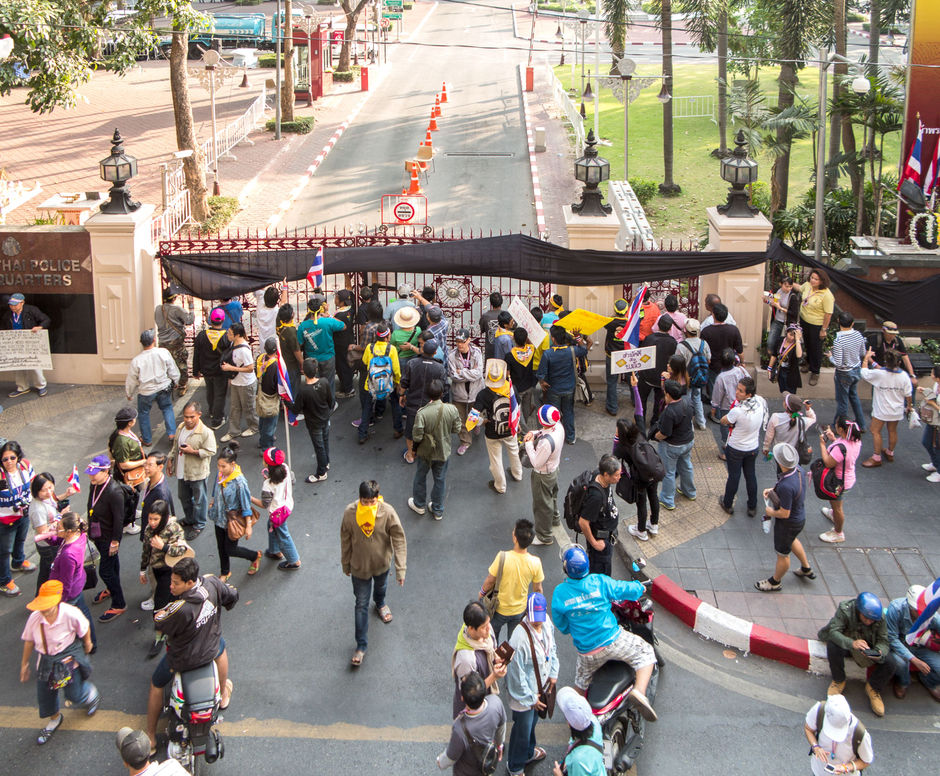 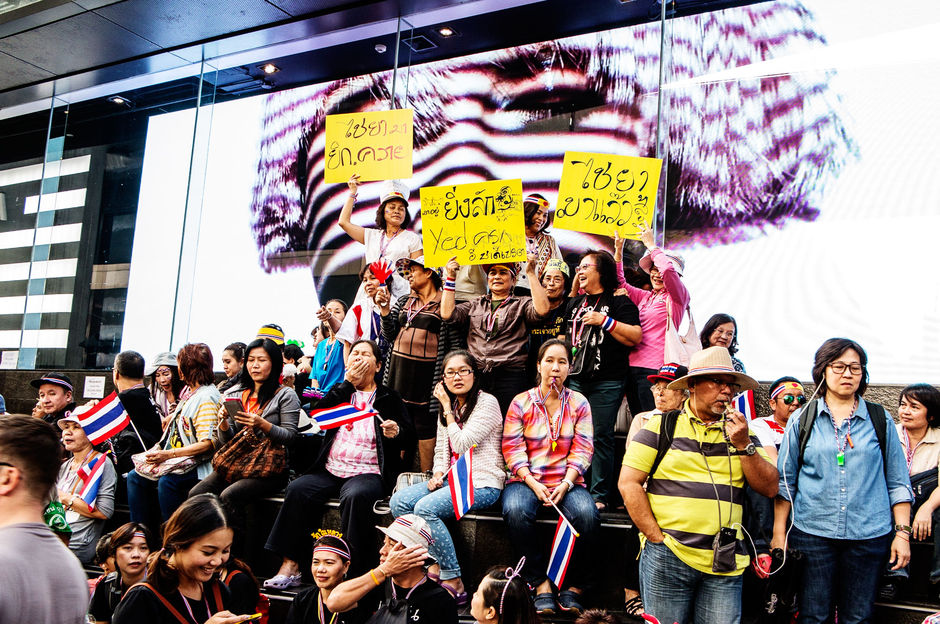 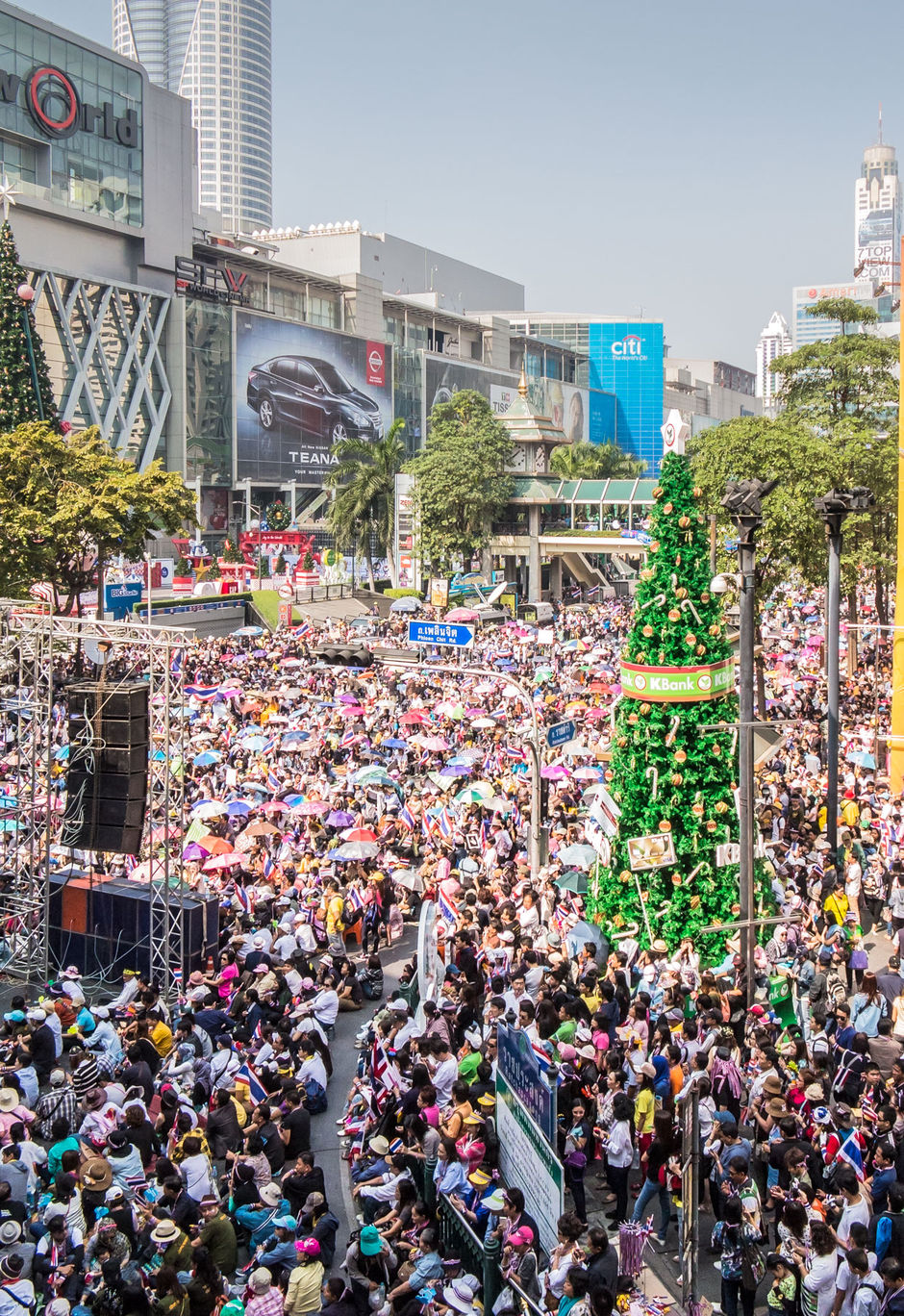 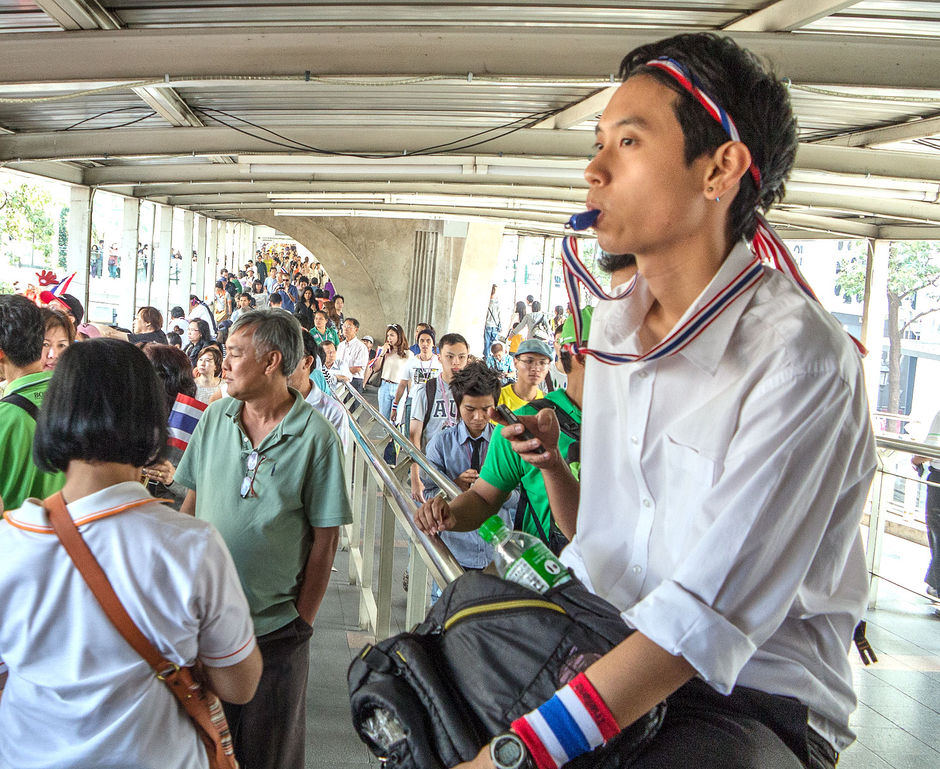 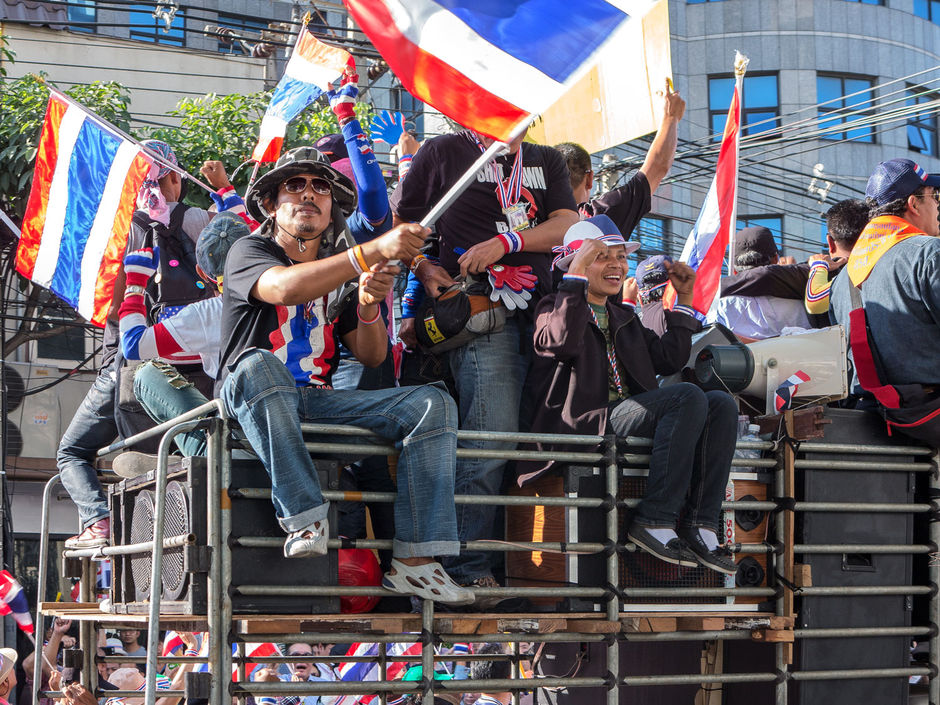 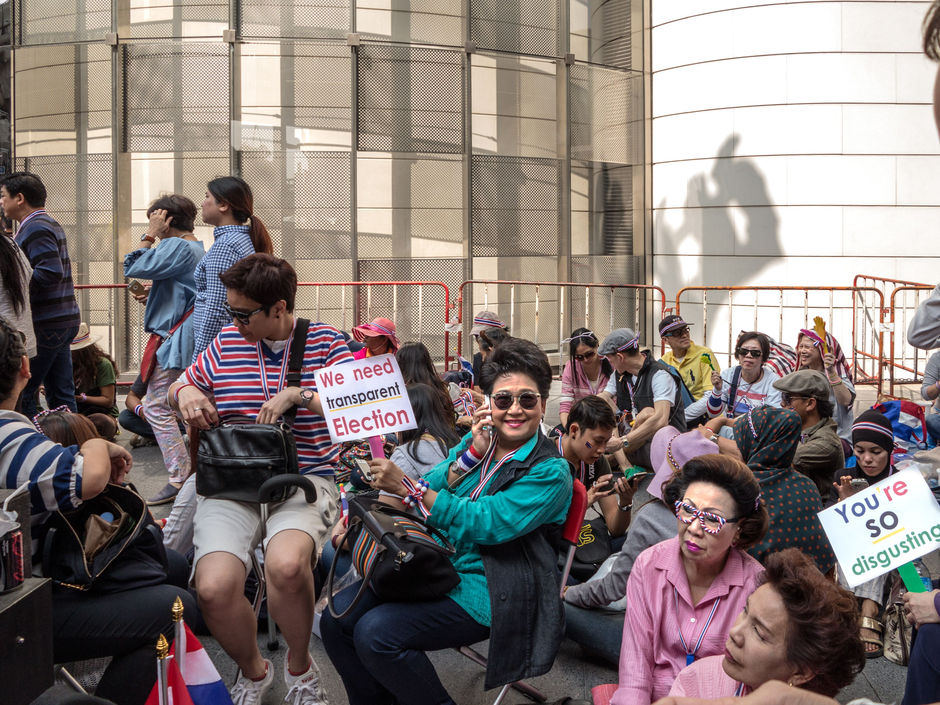 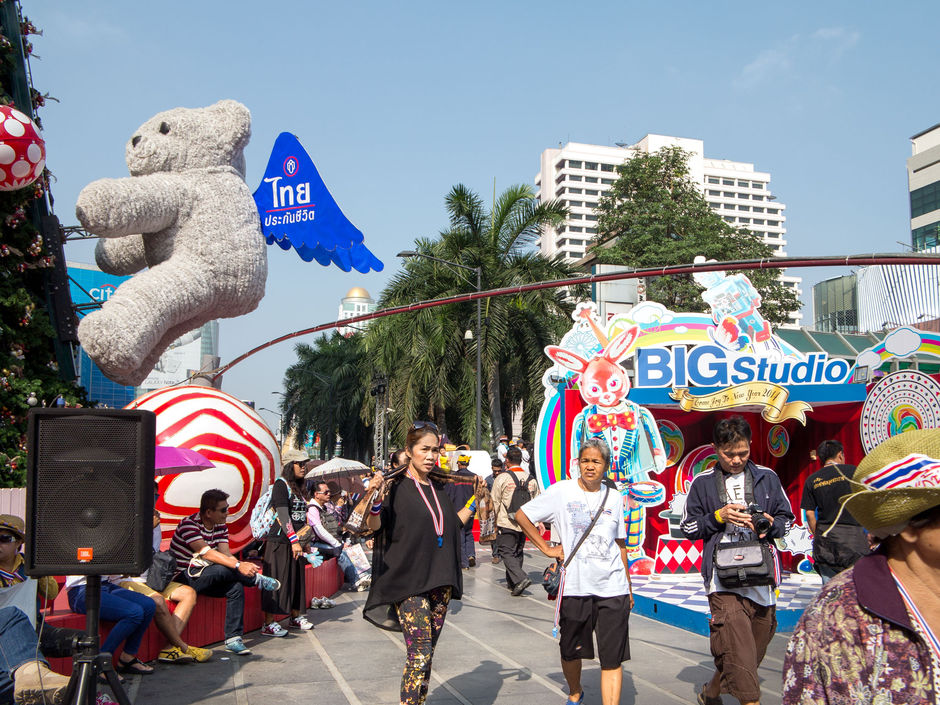 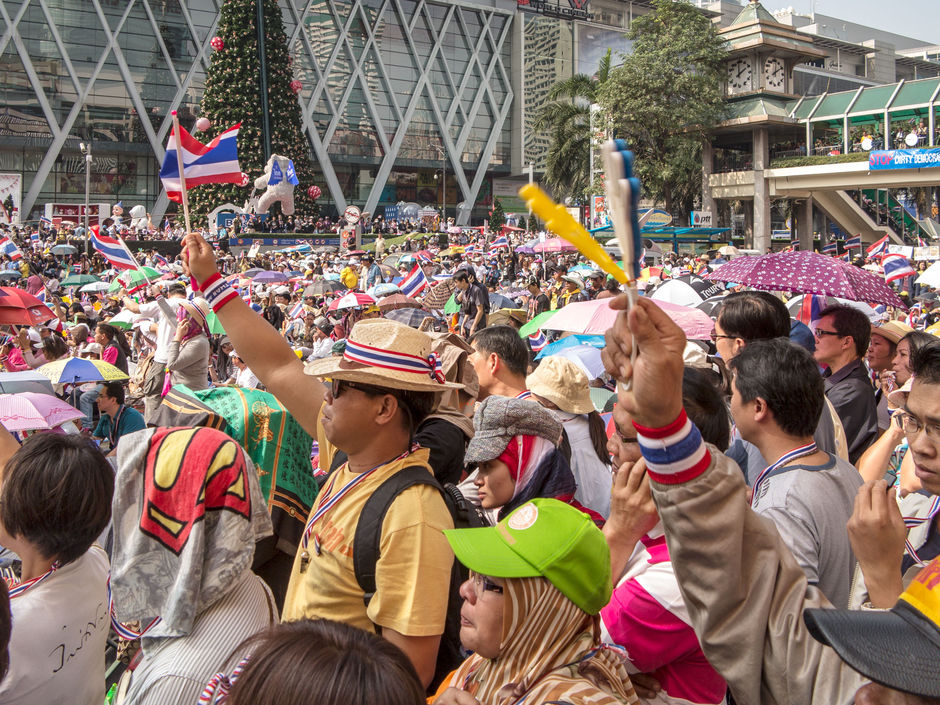 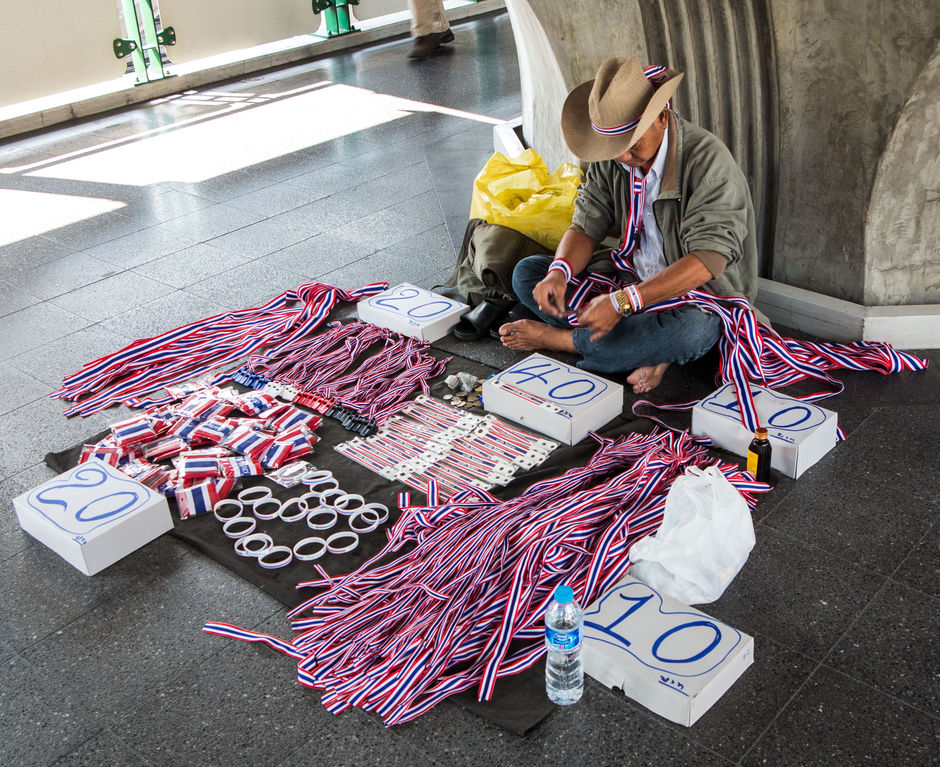 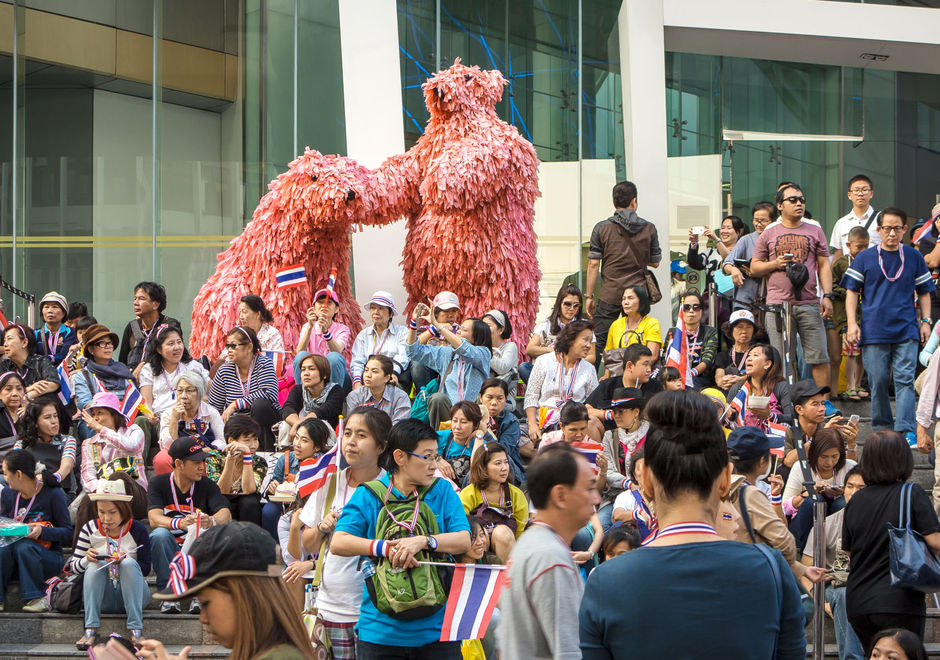 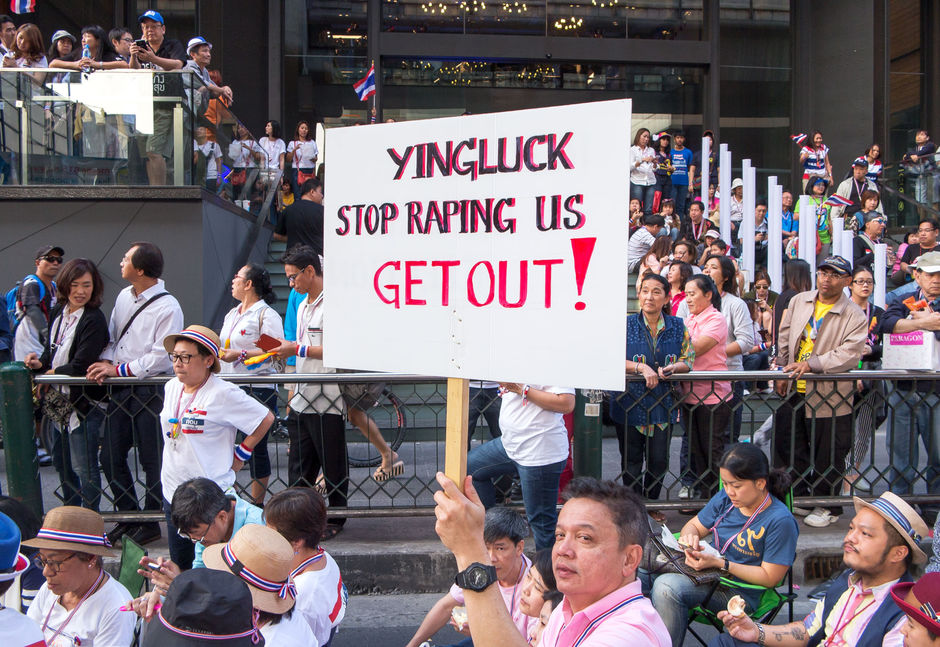 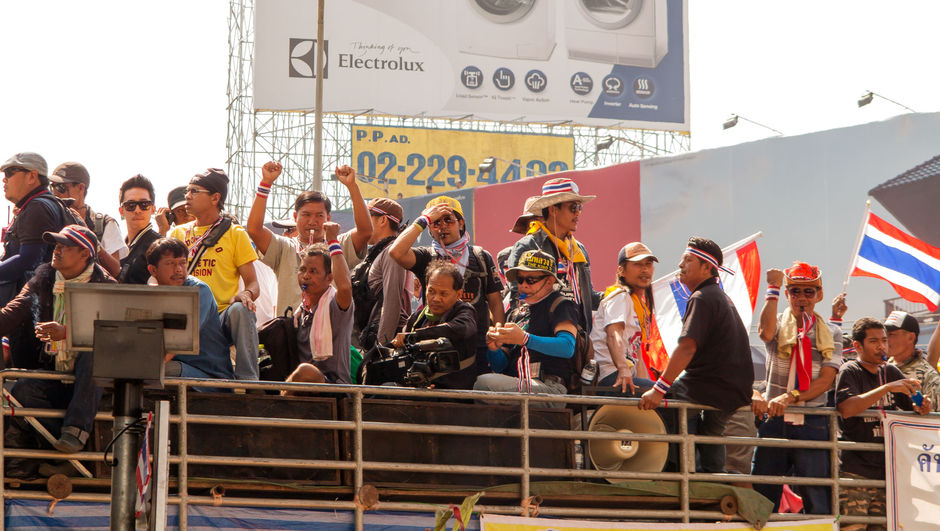 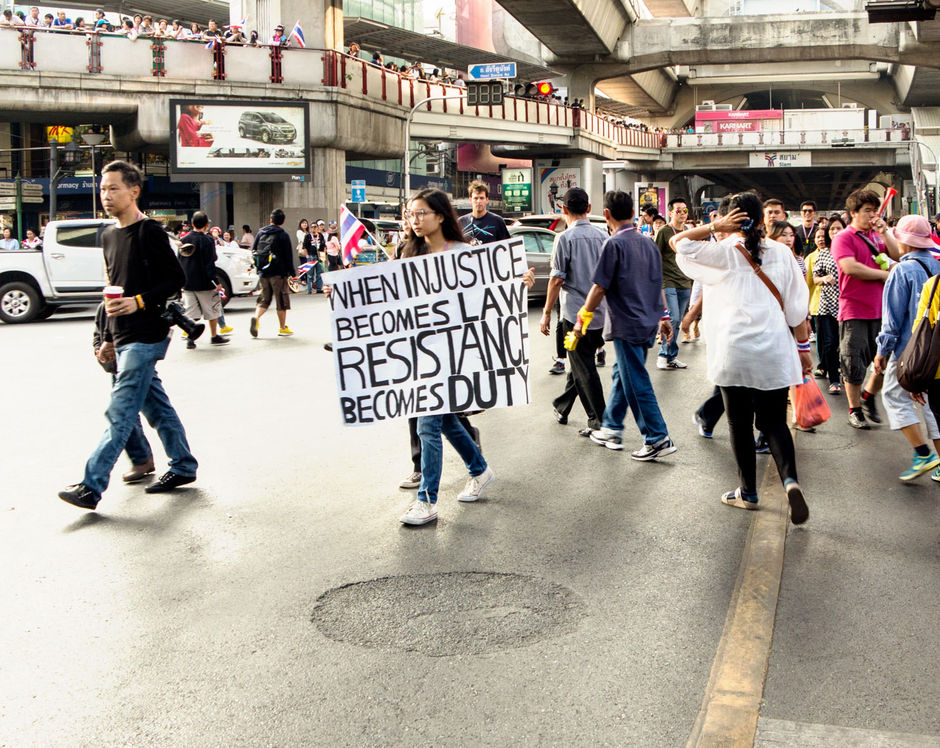 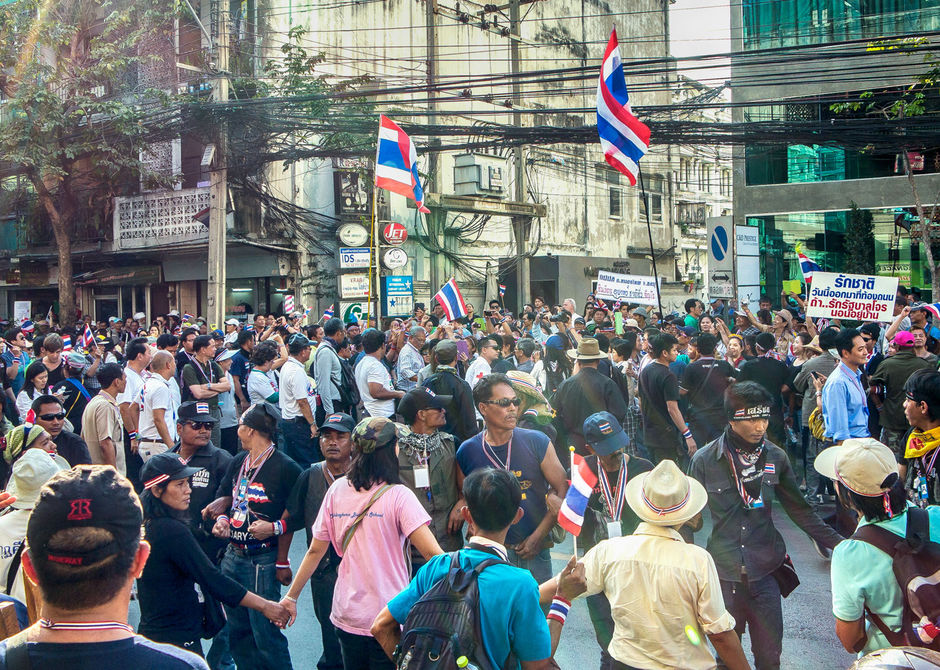 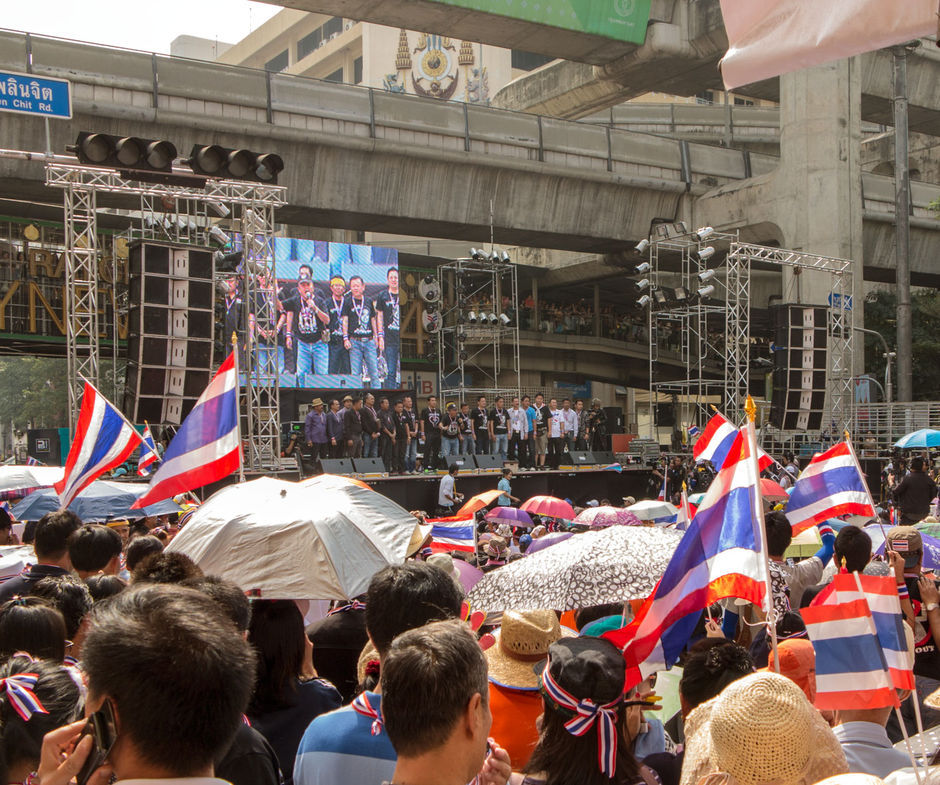 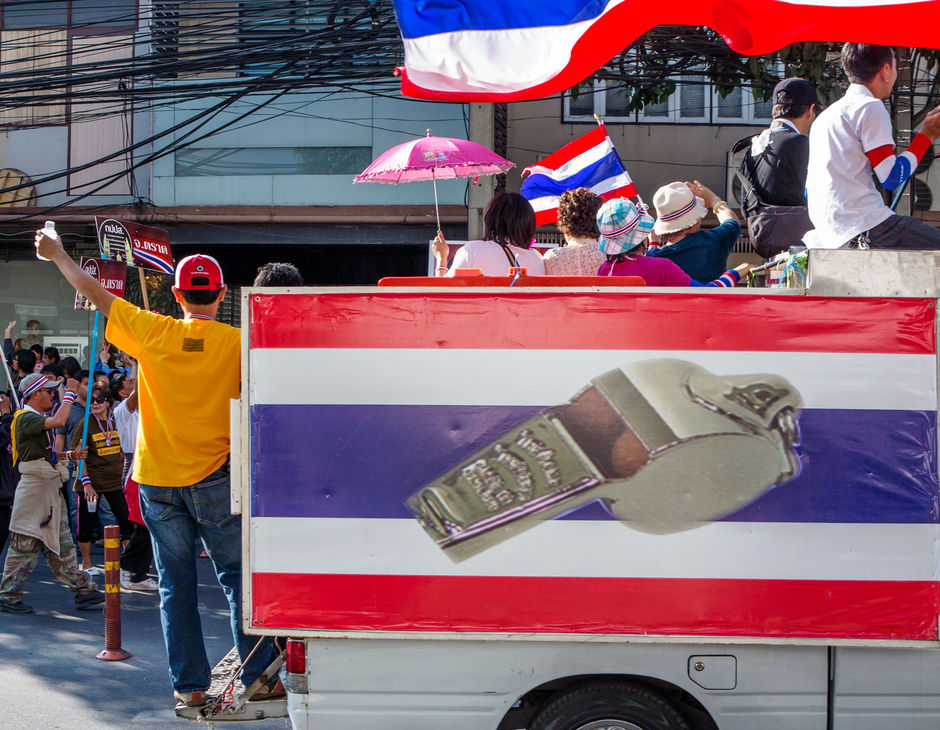 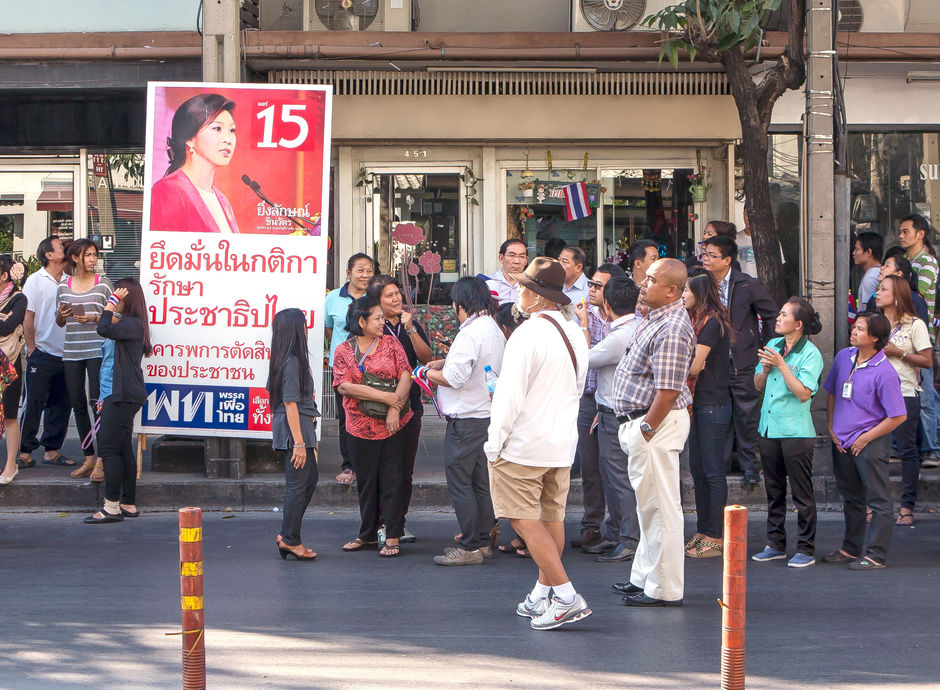