You may have heard that last week Wikileaks released a new draft of the TPP IP chapter. This document was circulated after the Brunei round and reflects the scuttlebutt I had heard while at that negotiating round. In short, the US was pushing hard in the copyright chapter for very strict rules and that there was a lot of discussion on pharmaceuticals.

The draft includes the proposals and oppositions of the various negotiating parties. As such we get a much clearer idea of where each country stands. New Zealand, for example, looks like it’s taking a stand against strict copyright law, something we should be proud of (for the time being).

On To Promote the Progress, Gabriel J. Michael has done an excellent analysis on each country’s position and who they stand alongside. While his analysis doesn’t look at what each country is proposing, it does show some interesting trends in which countries are working together.

For example Michael finds that “there appears to be a strong negotiating network between Singapore, Chile, Malaysia and New Zealand”. Also interesting is that New Zealand agrees more with those countries (and Canada) than Australia. Australia though is the US’s closest ally.

The US and Japan are the loneliest countries, with the fewest number of proposals with other countries. They also have the second and third highest numbers of solitary proposals (Canada oddly is first in this category).

The cut down network graph is the one that makes the most sense. This shows exactly which countries are working together (click to enlarge): 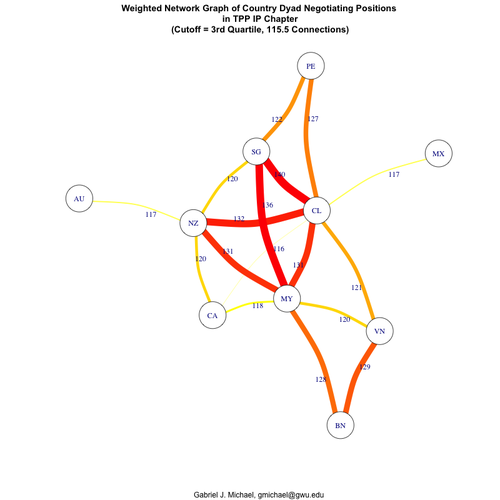 The US isn’t on that graph.

As I mentioned on Consumer NZ you can see the disparity on the first page of the IP chapter:

The US and Japan oppose what the objectives of the IP chapter are, this doesn’t bode well.

Looking at this document, and knowing that the most recent IP negotiator meeting in Tokyo was a bust, any reasonable person would say that there is no way this will be signed by early December. Not without serious capitulation by certain countries.

And this is why the leak is so important. We now know each country’s position, so we can see who caved to whom. Should our Government sign this in its current form we can all see where they sold us out.

Pharmaceuticals is clearly still a major issue with the US pushing for patent extensions for any conceivable reason and for patents to be granted to surgical procedures. This is the sort of patent law which sees patients left hanging or paying exorbitant fees for medical treatments. New uses for drugs, even if that use is not as effective, can be cause for a patent extension.

Longer patents for drugs, means longer waits for generic drugs and higher drugs prices. This in turn could see the cost of health insurance premiums rise.

The Nyes Institute released an analysis of the impact on health in New Zealand from the TPP:

Improving regulatory coherence, maximizing efﬁciency and economic growth are valid and worthwhile goals of TPP negotiations. A signed agreement would almost certainly be beneﬁt New Zealand’s economic measures. However, it is important that legitimate health goals can coexist with economic aims.

The TPP has considerable potential to promote New Zealand’s economic growth and regulatory coherence. However, provisions which directly or indirectly threaten population health could undermine these beneﬁts unless meticulous attention to detail can be paired with pragmatic forecasting of science. The TPP’s binding commitments necessitate detailed advice and analysis by the health experts. The conﬁdentiality of TPP texts makes the requisite analysis by acknowledged experts impossible. Developing a more transparent mechanism for technical experts to provide much needed input is required.

If publishing draft texts is impossible then innovative approaches are needed to improve transparency, appropriately reassure the New Zealand public and minimize potential harms of the TPP.

This lack of transparency may be a shock to the United States Trade Representative’s office (USTR). Their head Michael Froman called the TPP “the most transparent trade negotiation in history,” and he did so while touring Paramount’s movie studio. Irony is also not on his radar.

While they may parade the number of stakeholders who have spoken at negotiation rounds (including me) listening is not the same as transparency. Steve from OpenMedia.ca notes that “Over 600 Industry lobbyists have been invited to the negotiations while citizen orgs, key decision-makers, and the public have been left out.”

In the interest of transparency the latest round of talks, being held right now in Salt Lake City, will “work closely with subject matter experts to advance the ball as far as possible on a number of outstanding issues."

Who are these subject matter experts? From what I’ve heard these experts will be similar to the ITAC-15 (the US Industry Trade Advisory Committee on Intellectual Property Rights), the group of businesses who have already seen the TPP documents. Note that while some New Zealand companies, such as Fonterra, are championing the TPP none have officially seen it.

Let’s be clear about something: signing the TPP in its current form is letting a foreign country (the US) and the foreign companies that lobby it write the law in this country. New Zealand has delayed the review of our copyright legislation because of the TPP, now we may have to change it in order to protect American media agencies.

Right now there is so much information out there on the TPP as both sides of the argument go into high gear. Many of the countries would like the TPP signed in early December, just looking at the leaked draft will tell you that they are nowhere near that. This means politicians will be horsetrading deals on what they will give up.

Again, because of the leak we now know each country’s position, so we can see who caved to whom. Should our Government sign this in its current form we can all see where they sold us out.

Consider this a call to action.

There is still a large portion of the population who have not heard about the TPP or know what it means for New Zealand. For some reason the media don’t seem to care for it either. Despite getting the leak exclusive from Wikileaks, the Herald buried the story on page 2, while TV3 left the story to the middle of their broadcast. So it’s up to you.

Post links to social media, talk to your friends and family about it, and always make it clear, this deal will make it worse for consumers.

A Reddit AMA (Ask Me Anything) on the TPP with members of EFF, KEI, Public citizen, Techdirt and OpenMedia.ca

The IP chapter on Wikileaks

A series of leaked “talking points” from pro-copyright groups