In the 1960s, Marion Bruce was one of the first parents in New Zealand to get a diagnosis of autism for her son. So rare was the diagnosis considered at the time that it could only be confirmed by a visiting expert from London, retired child psychiatrist Dr Mildred Creak, when she came to visit her Quaker relatives in Wanganui.

Marion sought out other parents and in 1969 persuaded the Intellectually Handicapped Children’s Society (today’s IHC) to allow them to form an autism subcommittee. Eventually this became the Autistic Association, now Autism NZ. Those parents fought for recognition, support and services in an era when autism was seen as a result of faulty parenting; the ‘refrigerator’ mother. A ‘Life Story’ for Marion was published in the Dominion Post 19 March 2016 and is reproduced in full here.

By Bess Manson and Hilary Stace 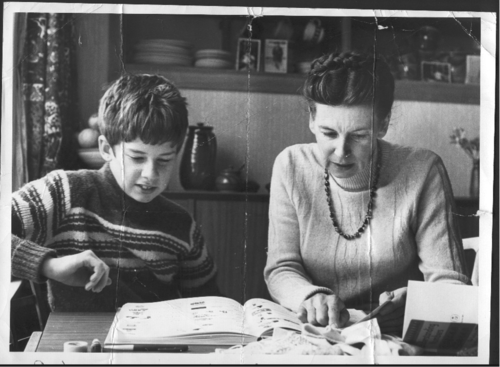 Marion Bruce spent her life trying to make a better world for her autistic son. In doing so, she helped scores of other autistic children and their families.

She was effectively the founder of what is now Autism New Zealand after persuading the Intellectually Handicapped Children's Association to establish an autism sub-committee in 1969.

Bruce had four children, the youngest of which, Andrew, was somehow different and not allowed to attend the local school. He was eventually diagnosed with autism, a condition so rare at that time that a tentative assessment could only be made until an overseas expert from London, Dr Mildred Creak, visited to confirm the diagnosis for the few children with this label in New Zealand.

Creak, a retired child psychiatrist who had developed a diagnostic criteria for autism, encouraged Bruce to contact other families in New Zealand to set up a support network for parents.

Their first committee meeting took place in 1969 under the umbrella of IHC.

Over the years, the group ran seminars, workshops and holiday programmes and lobbied for understanding and resources for autistic children. This group became the Autistic Association and eventually Autism New Zealand, of which Bruce was a life member.

Philippa Barker, the former national secretary of Autism NZ, says Bruce was a pioneer in helping to get autism recognised in this country.

"She was the go-to person for information and advice on autism in New Zealand when no-one knew anything about it, when there were no resources or facilities. In the UK there were schools for autistic children but not here.

"She lobbied for facilities and to have autism recognised as a condition. She travelled abroad to conferences, often at her own expense, to learn about the condition and brought back information to parents here.

"A lot of people with autistic children were floundering until she came along."

Bruce was fiercely devoted to her autistic son and very determined to give him a better life.

However, at the time of Andrew's diagnosis, autism was seen as the fault of the parents, particularly mothers, and so families faced considerable discrimination. Without community support or access to local educational options Andrew went to live at Hohepa, in Hawke's Bay, where he remains.

Her advocacy for him and their relationship retained the life-long intensity that other parents of disabled adult children might recognise.

She lobbied to establish local schools and services in whatever way she could, including through membership of the Wellington Hospital Board, which established the Puketiro child development centre.

Marion Bruce and her younger sister Barbara were born in Christchurch and grew up in Wellington with their father Maurice Fougere, who was in the New Zealand Army, and mother, Edna Lisle,an auxiliary nurse.

She went to Mt Cook Primary School and Wellington East Girls' College where she shone academically, topping all her subjects in the sixth form. She was encouraged to go to university by her teachers but it was wartime and she was instead directed to work at the Dominion Museum.

Bruce spent her time collecting specimens, learning taxidermy and taking exhibits to schools. She often talked about carrying squashed dead possums in a bag on the tram, hoping no-one would smell it.

She learned how to plait and weave Maori kete and other items in order to teach the skill to school children. An expert braider, she wore her hair in her signature braids wound around her head until her 80s.

After gaining a diploma in group social work with the YWCA in 1945 she went to work for the YWCA in Wellington and the Hutt Valley as an organiser of youth activities and community development for women.

In 1947 she graduated from the University of New Zealand (at Victoria University) with a BA in languages.

As an experienced youth and community worker, Bruce was selected as one of two New Zealand women to join a delegation of 28 from across the Commonwealth to be sent for specialist training in youth group work at the University of British Columbia in Canada. She returned to Canada in the early 1970s to represent the NZ YWCA in preparation for International Women's Year in 1975.

She married a young doctor, Lyell Bruce, in 1949 and they had four children. They lived in Patea and later settled in Porirua.

After Lyell's death in 1981 she moved to their beach house overlooking the sea in Raumati South until relocating to the Harbourview rest home in Papakowhai a couple of years ago.

Bruce's contribution to the community extended well beyond autism circles.

She worked with JB Munro, the long-time head of the IHC, in developing the NZ Federation of Voluntary Welfare organisations, and was appointed to the Royal Commission on Social Policy. She was a member of the Wellington Hospital Board from 1971 including a term as chairwoman until the boards were all sacked overnight in 1991 by the National government.

As a doctor's wife, she knew the difficulties of mothers having to take their children all the way into Newtown to Wellington Hospital by public transport, especially if wives where separated from whanau, or were  from a Pasifika background  or lacking language skills. Ensuring Kenepuru Hospital expanded to offer full services was an early priority in Bruce's tenure on the board.

She volunteered at Hartham Women's Centre in Porirua, Plunket, Girl Guides and was an adviser at the Mana Parents Centre. Bruce was awarded the Queen's Service Order in 1986 for services to the community.

Bruce had a fierce intellect and was a superb craftswoman, spinning and knitting fine wool and making pottery. She also travelled extensively. Before a trip to Greece in 1980 as a world council member of the YWCA, she learned Greek. Her travels also took her to China, South East Asia and the Middle East.

She was a voracious reader and thinker, and an energetic and passionate community advocate whose contribution to society changed lives for the better.