'The ugly side of Polyfest' blared TVNZ's headline about two fights near PolyFest in South Auckland last weekend. It was a horrible headline which appeared to imply that violence was somehow part and parcel of this annual cultural festival, now its 42nd year. It really isn't.

And, indeed, after a flurry of social media criticism, TVNZ completely rewrote both its headline and story as: 'It's incredibly disappointing' - police condemn teens for brawling near Polyfest as thousands watch fight vids. But the original version is still cached as: Graphic: The ugly side of Polyfest emerges as video captures teenage girl dragging another by her hair then punching her. 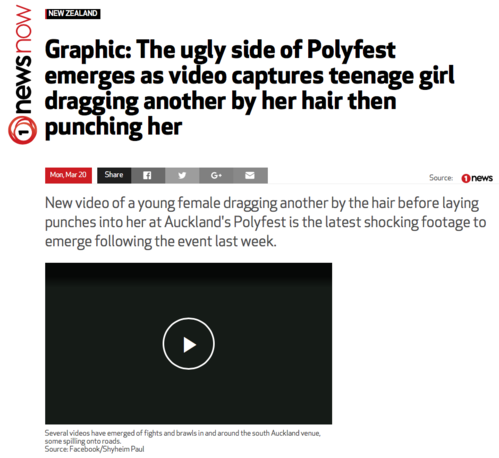 You'll note the new headline says "near", not "at" Polyfest. This is presumably a response to a statement from Counties Manukau Police which declared:

Over 90,000 people attended Polyfest in Manukau over the four-day festival and police were very impressed with the behaviour of those who attended.

The statement said neither of the fights captured in Facebook videos actually happened at the festival. One was nearby and the other was outside Manukau's Westfield mall.  Both were on Saturday afternoon and it seems far from clear that the second was associated with Polyfest at all.

TVNZ did another thing: it removed the videos it had ripped from Facebook from the story. And really, while the framing might have been a result of racist assumptions, those videos were the only reason the story got space. The spectacle was the story.

While TVNZ has copped plenty of flak, it should be noted that a number of other news organisations ran those videos too: Newshub, Stuff, the New Zealand Herald, Newshub again and the Daily Mail Online. Radio New Zealand and Māori Television managed to report the story – and the responses – with single stills from one video. Their stories lost nothing but spectacle. Maybe wringing your hands about violent videos getting thousands of views and then giving those videos a bigger platform isn't really a very consistent approach.

Ironically, on the same day, there was another troubled event in a different suburb where the property values are loftier – the one where I live. George in the Park was a partnership between Auckland Council's Music in Parks and MediaWorks' George FM. It featured Kings, Sola Rosa and Nice 'n' Urlich and, according to the council, 13,000 people converged on Point Chevalier's Coyle Park.

I actually doubt that figure (my guess was well under 10,000), but the streets north of Meola were certainly jammed in a way I've never seen them before, even for the Big Gay Out. I rode down there on my bike around 3pm and I could see it was parked up all over. The other thing I saw as I got closer was kids sitting around drinking. Why would you preload before going to a park?

The organisers had repeatedly appealed to people not to bring glass, but said the event was BYO if they wanted a drink. Unfortunately, a lot of people seemed to hear that as an instruction to turn up with boxes, slabs and bins of beer, cider and RTDs.

I was actually unnerved by the amount of booze I saw being lugged past me. And I've been to enough gigs to feel that that much alcohol in a very crowded park was not going to end well. I enjoyed Sola Rosa, but I felt a bit uneasy with it and didn't stay long.

Within an hour or two, all hell was breaking loose. Ambulances arrived to attend comatose punters. A guy tried to pee off the clifftop behind the stage, lost his balance and fell onto the rocks below. Another guy was found face down on the nearby tidal flats and had to be dragged to safety by members of the public (he was deposited on a grass verge where he remained apparently unconscious). A group of KCs turned up. Police cars converged. People staggered out and peed (and even shat) on nearby properties. There was a big brawl at the other end of Point Chevalier road, spilling across the intersection with Great North. It was a hell of a mess.

The council has since published a brief statement hailing the attendance but saying:

It was disappointing to see poor behaviour from a small number of attendees which didn’t reflect the intent of Music in Parks.

We regularly review how events are run to ensure they provide a fun and safe experience for Aucklanders.

My understanding is the council is unlikely to partner again with George FM. For whatever reason, the day went very differently than a Music in Parks event is meant to (although while the front of the park was heaving, the back field was pretty sweet, with stalls and even a man making bubbles for entranced children). And it does seem clear that they were surprised by the size of the crowd, which is why there weren't enough portaloos.

It's possible, I guess, that the mess may also result in a ban on BYO. Which would be a shame, because it's lovely being able to have a beer in the sun and listen to good music. In truth, the problem isn't the rules, it's the fact that people need need to bring a weekend's worth of booze to a four-hour event. It's us.

It's also worth noting that Polyfest was prominently advertised as drug and alcohol free.

But the striking thing is that in contrast to the events near Polyfest on the same day, none of this made the news. In part that's explained by the availability of shocking video that could be associated with Polyfest. But you have to wonder if that wasn't the only reason.