I was at a music festival in Auckland on New Year's Eve when I saw, on my phone, the news that "dangerous drugs, made with pesticides and paints, have been found at Rhythm and Vines." And that patrons had received a warning about about the potentially poisonous drugs that evening, via a push-notification from festival management that went to all phones on site.

I still haven't been able to locate a screenshot of the actual warning (but would be keen to see one), so for the moment I have to assume that it was identical, or at least very similar, to the one posted on Facebook by the local DHB. 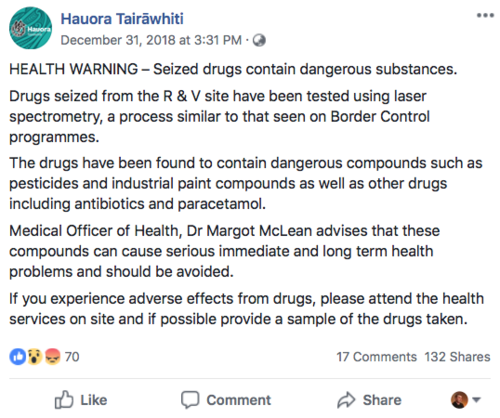 On one level, it was the kind of health-based early warning that harm reduction advocates have been calling for  as a lifesaving measure for years. On another, it was frustratingly vague, to the point of being almost useless. The harm reduction organisation Know Your Stuff, which was not on site at R&V, politely tweeted:

We urge those issuing alerts to at a minimum include a description of the pills/substance, and likely symptoms from consuming.

The part of the alert urging anyone suffering "adverse effects" from drugs to see onsite medical services was salient in a general sense – and the request that, if possible, they bring a sample of what they'd taken was useful. It might have helped to emphasise that no one bringing such samples to medics would face police action, but it seems notable that police  made no arrests of any kind at Rhythm and Vines.

Ruwani Perera managed to introduce more useful information – after the fact – in her Newshub report, with the news that the bad drugs were pills and "the pills look like MDMA or Ecstasy and are purple."

But we still don't know what quantity was seized, what the exact contents were. Inevitably, the vagueness of the alert has led some people to suspect that it was simply a scare story to put people off taking drugs altogether, rather than a real warning. I would hope not, because the ultimate effect of that will simply be to lead users to ignore such warnings. That's obviously undesirable.

It was also unclear who had actually issued the warning in the first place. The DHB? Festival organisers? The police? The One News report offers a bit more context there. It appears that Gisborne police had borrowed a spectrometer  from Customs to analyse contraband drugs seized by festival security. Some pills were just sugar.

It is likely that a properly set-up spectrometer, drawing on a library of reference profiles, would be able to promptly identify toxic paint and pesticides. More so given that in the field Customs uses the FirstDefender handheld Ramam spectrometers, which are built to identify almost any chemical, including those found in poisons and explosives.

But the FirstDefender is a quick-detection device, and doesn't have the level of forensic analysis offered by the likes of the FT-IR scanner owned by the New Zealand Drug Foundation, which is used in the field by Know Your Stuff. It could be difficult to identify multiple substances in one sample, especially for non-expert users – and to determine actual quantities of the contaminants.

So did the machine pick up mere traces of pesticides and paint? That's possible. But even traces of unwelcome contaminants should be a warning sign. And it's worth noting that one of FirstDefender's shortcomings is its relatively poor detection limits, so there had to be enough of the contaminants for the spec to pick up. So it was worth a warning, I think – just a better one.

Some of the information in the One News story came from Police minister Stuart Nash, who visited the site and was also shown the spectrometer by officers. What he had to say was immensely encouraging:

Festival-goers overseas are often able to get their drugs tested openly to check that they're safe and that they are what they're claimed to be.

And the New Zealand Government would like to see pill testing become the norm here, too.

"You know, you had 20,000 young Kiwis party and have a really good time here. I would like to see drug testing at festivals. I think it saves lives, it save hospitalisations. And it's actually the right thing to do. And it's dealing with the reality in which we find ourselves," Mr Nash said.

It's a shame that the government has satisfied itself with talking about drug-checking at this point, rather than moving forward and actually amending the Misuse of Drugs Act in time for this summer's festivals. The truth is that festival organisers don't want kids getting sick or dying from bad drugs, but  they put their businesses – and specifically their event insurance – at risk by acknowledging that people use drugs at all (other than alcohol, which is easily the most problematic one at large events).

But we seem to have reached a point where politicians, police and health agencies are on board with realistic harm reduction strategies. A point where, however flawed, an alert has been issued to people who may consume something very harmful.

What needs to happen next is to allow this to be done properly. As Dr Jez Weston of Know Your Stuff wrote in a series for SciBlogs last year, the psychology of drug-checking is just as important as the technology:

Trust is critical for people in possession of illegal substances to bring them to us for testing. It helps that we’re not the authorities. We are a grass-roots organisation and many of our volunteers have attended, assisted, or organised festivals for more than a decade. Being members of the community we serve nurtures a higher level of trust, in what can be a very exposing situation for our clients.

We are going out of our way to provide a free service for our clients, so in a sense, it’s a gift from us to them. This sets up a mutual obligation. We’ve provided our clients with a service that they value; it’s now up to them to reciprocate by providing us with something that we value, namely making safer choices about their drug use.

This kind of harm reduction, the kind that works, is about more than fancy machines. Jez concludes:

The majority of drug users we see are not addicts or drug abusers. They are adults who want to have a good time, are willing to take on a small amount of risk to do this, and are keen to reduce that risk.

When someone who has purchased drugs and is planning on taking them becomes someone who is willing to not take them and dispose of their drugs in front of us, that shows the confidence they are placing in our testing and explains the remarkable effectiveness of this form of harm reduction. Put simply, providing factual, objective information to allow people to make better choices leads to them making better choices.

There's a right way to do this. Let's get on with it.

Meanwhile, in Australia, where a young man died (and two others were hospitalised) after taking an "unknown substance" at a music festival on New Year's Eve – the fourth such death there since September –  a former Labor Party leader tweeted this filth: 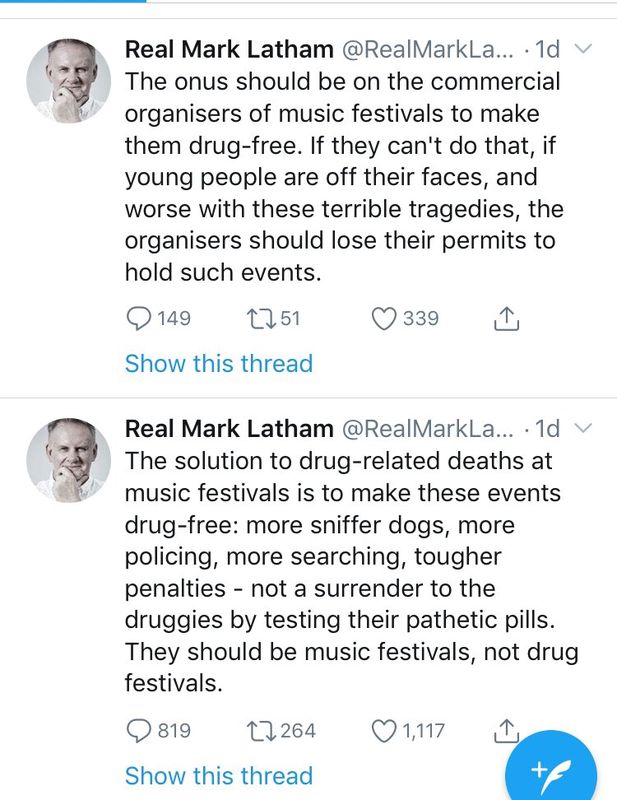 Ironically, the story linked above emphasises the extraordinary lengths Australian police are going to to detect and prosecute drug possession at events. It's not keeping anyone safe. If anything, it's doing the opposite. But this most recent death has moved the leader of Latham's former party in New South Wales to rethink his opposition to drug-checking. Things may be changing there too.