The Chills' official YouTube channel reminded me, via Facebook, of an oddity this week -- this freaky 1985 Chris Knox video for 'Whole Weird World', a song that Chris went on to cover in his live sets:

You will probably see a pop-up advertising strip when you watch it (my one was for toothpaste). Don't hate the ad, because it means that Martin Philipps just earned a speck of money through you watching the video.

I'm presuming Martin is the direct beneficiary of that modest income stream -- that's fairly straightforward. But what's more interesting is that even if someone else uploads one of his videos, or even makes their own for one of his songs (by one count, about 95% of YouTube videos containing music are fan-made), he stands to earn from that.

The major labels have been doing this for several years now, either via Vevo, which is a kind of special YouTube space (which attracts better advertising rates) for everyone but Warner Music -- or for content in the wild, YouTube Content ID, a digital fingerprinting service which identifies music and offers registered rights owners the option of of other having potentially infringing works taken down, or the chance to "claim and monetise" by leaving it up and earning a fraction of a cent for every play. (Some broadcasters, including TVNZ, also do this.)

Using YouTube Content ID hasn't been entirely straightforward for indies or self-releasing artists, but that's very quickly changing. Chris Hocquard's digital aggregator DRM has become an accredited YouTube Content ID partner and can can register New Zealand artists' work. The default setting will be to claim-and-monetise, but owners can elect to have clips taken down, or simply assert ownership without seeking to commercialise it.

The 25 billion monthly YouTube views generated $3.6 billion in advertising revenue last year. In the material DRM has sent out, they sat they're expecting YouTube to become second only to iTunes as a digital revenue stream. As I keep saying to people, the idea that the music industry doesn't know what's going on simply isn't correct. No ne's there yet, but music is a long way further through the big change of the internet than other sectors.

Performance rights revenues -- a separate stream -- aren't as fully-developed yet, but Britain's PRS for Music (the equivalent of APRA), which has led the way for rights agencies, recently signed a new deal with YouTube.

None of these forms of revenue will be the whole story for artists, but, to take a big example, one million of the $9 million Psy earned off 'Gangnam Style' came from his one billion YouTube plays. It all adds up.

Meanwhile Ministry of Sound is suing Spotify for copyright infringement, claiming that Spotify offers playlists that are identical to Ministry of Sound dance music compilation albums. How much intellectual property is there in making a compialtion? Guess we'll find out, eventually.

Another YouTube archive charmer hit the wires this week. It's for 'Dunes', from The Clean's recently re-issued Vehicle album and it's made from David Kilgour's own video of the band's 1989 visit to New York:

Aaaaand ... the Bird Nest Roys reissue package Me Want Me Get Me Need Me Have Me Love has just landed at Flying Out. It's their whole damn discography as a 2LP or CD, with accompanying stuff. Look, here's 'Alien', directed by Jed Town:

On the future heritage tip, there's quite a bit of new material on TheAudience this week, and some of the nicest of it is from solo producers. I really like this from Pixl8, who is interviewed here by Dan Clist:

He likes Flume, which makes sense when you listen to his track. That's a free download of you click through and hit the "fan" button.

Pages on AudioCulture continue to grow as musical taonga are liberated from under beds. This week, some great posters and other images have gone on the Hello Sailor page.

And no fewer than 35 new images have been added to the Blam Blam Blam page to go with a new and definitive profile of the band by Andrew Schmidt. I do like this one: 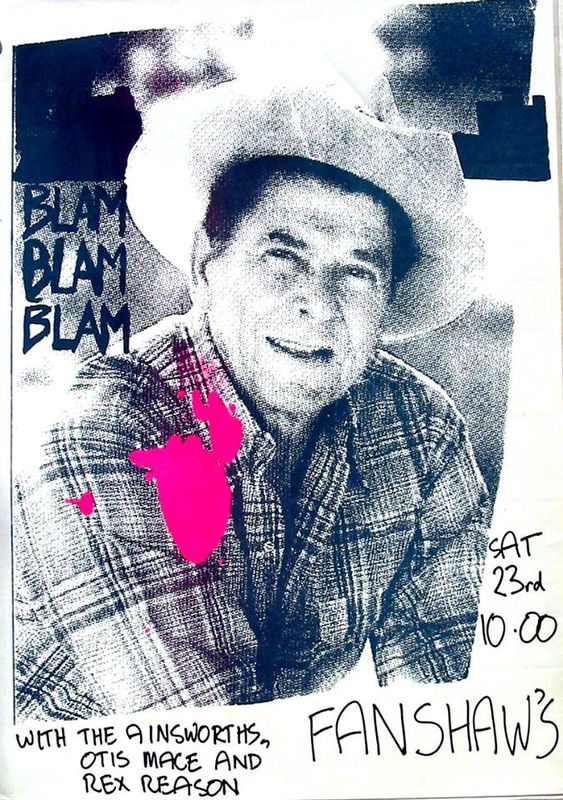 And Christchurch folk may be particularly interested in the new entry I've written about the Gladstone Hotel, which was the centre of a remarkable scene in the early 1980s -- and has a much longer and more storied history than most people realise.

Nick Bollinger has become the latest local music reviewer to establish an online home and archive for his work -- and it's a really nice-looking site with a lot of browse through.

You know how some party records become a casuality of partying? Yeah. My basically irreplaceable white label 12" of the Manchester-based Massonix's late 80s cover of Barry White's 'Just a Little Bit More' bit the dust a while ago. So I was super-pleased this week to see that Leftside Wobble has posted his edit of the instrumental b-side as a free download. It's so groovy:

I'm always up for another remix of Daughter's 'Youth'. This a wonderfully moody house take on it:

Lorde's debut this week in the US Top 10 doesn't mean she's no longer cool enough of the beats crowd. Indeed, they're chopping up her tunes every whichway. Here's a dubsteppy take on'Royals':

There's quite a lot on in town tonight if you're minded to go out to a show. There's no way I'm paying sixty bucks to hear Amanda Palmer at the King's Arms, but I'm amazed and impressed that she's been able to draw the amazing Peter Jefferies out of retirement to open for her. I hope this isn't a one-off on Peter's part.

Ghost Wave and the Eversons are playing Lucha Lounge for just a fiver.

Where I'll be is hearing Matthew Bannister perform his cover of the Beatles Revolver album with a bunch of guests, at the Thirsty Dog on K Road.

Where I won't be tomorrow night is at the Lorde show at Vector. I missed out on the iHeartRadio giveaway (I never even got an email) and although I could probably scrounge up a ticket, I think I'll leave that to the kids and watch the iHeart stream -- which I hope works better for me than the ticket thing did.

And, finally, just because it's good to know there's more in the world than Robin Thicke, Marvin Gaye at Montreux in 1980: