The roiling, leaking, chaotic, corrupt White House of the current US presidency has delivered a succession of remarkable figures into the public eye. Nearly all of them are fools, grotesques or both.

But one new face is clearly neither: Michael Avenatti. Before he first presented as the lawyer for Stephanie Clifford, aka Stormy Daniels, last month (yes, it was only last month), Avenatti was merely a very successful California litigator – having, to take one example, successfully represented the plaintiffs in a massive $US454 million class action against a medical equipment firm.

And until then, Daniels herself had seemed buffeted, compromised and powerless, no matter the substance of her claims. Since then Avenatti has, from what seemed a relatively weak starting point (that Trump never co-signed Daniels' NDA), completely reframed what her case is about.

Avenatti is no stranger to the media business – he defended Paris Hilton in a $10 million defamation suit and he represented the plaintiff in an intellectual property claim again the producers of The Apprentice, Mark Burnett and Donald Trump, achieving what is thought to be a substantial settlement for his client.

He has lately engineered news events that have little to do with what might happen in court: sharing pictures of his client taking a lie-detector test some years ago, going on The View to present a years-after-the-fact artist's impression of the man Daniels says threatened her if she didn't shut up about her relationship with Trump. He brought Daniels to Cohen's court fixture for no other reason than to get her in front of the cameras for another day.

In person, he's what we refer to in the trade as "good talent". He's confident, available and speaks in exciting headlines. As he noted a day ago to Brian Stetler of CNN's media show Reliable Sources, he appears on a lot of TV news shows because they keep inviting him to appear.

One one level, it's patter – if he appears on several news shows in a day, he'll speak mostly the same lines. But he has also been basically right about everything so far. He was remorselessly baiting Trump's erstwhile "personal lawyer" Michael Cohen – and confidently predicting that Cohen would not be loyal to  Trump – before the FBI raided Cohen's premises.

Last week, he told CNN's Erin Burnett that "the worst is yet to come" in the case and that it was "a near certainty" that Cohen would "roll over on the President". 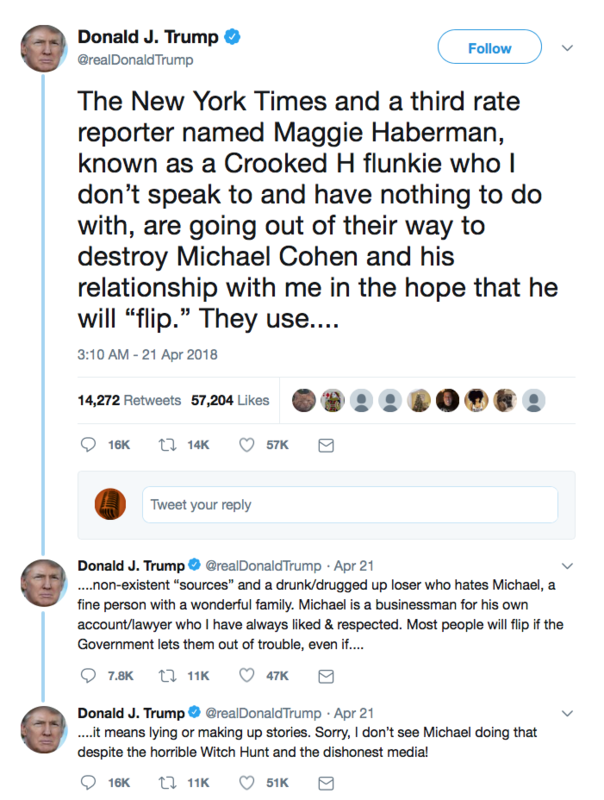 It was not, Avenatti observed in subsequent interviews, the action of a man with nothing to hide.

A day ago, he appeared on CNN's media show Reliable Sources and predicted that Fox News host Sean Hannity's ties to Cohen would prove fair more extensive than Hannity is currently admitting:

Hours before, The Guardian revealed that Hannity has a hitherto undisclosed (and partially taxpayer-subsidised) $90 million property portfolio, casting an interesting light on the Fox host's claim that he might merely have asked Cohen about property at some point.

But Avenatti has gone further than that. Last week he predicted that the Cohen investigation "could result in either [Trump's] impeachment or resignation from the White House" (at 08:50 in this interview).

This week, he upgraded that prediction.

"There’s no question that Michael Cohen knows where many, many bodies are buried,” Avenatti said. "They’re going to turn him, and when they turn him, the president is going to be in a very, very bad place. And I’m going to make a prediction now. I do not think the president will serve out his term."

He was drawn further on that prediction in his appearance on Real Time with Bill Maher, venturing that:

The dominos have alreadystarted to fall, and I truly believe that this is the achilles heel of the President. He has trusted a moron with his innermost secrets. And the problem is that he has surrounded himself in his adult life with people that are incompetent and the chickens are going to come home to roost.

It's straight-up bullying – or rather, in a era of unprecedented political-media bullying, a much tougher kid has entered the playground.

So what's Avenatti's long game? In the last 30 seconds of the Maher interview, he's asked whether he has any plans for a political career of his own. And he very much does not say no.

It must be noted that America in 2018 is a country with no agreed set of facts to unite over. Tens of millions of people are seeing a very different picture on Fox News and hearing another narrative on talk radio. The idea that something so bad could occur as to force Trump to vacate the office is still notional, given what he's already survived. But if Michael Avenatti does, as he says he will be able to, depose both Michael Cohen and Donald Trump in the next 60 to 90 days, it will be impossible not to watch.