Back at the beginning of April, when we had much else on our minds, I wrote this post urging some caution in interpreting the results of the latest Horizon poll, conducted in February, on voting intentions in this year's cannabis referendum, which was paid for by Helius Therapeutics.

I wrote that the structure and style of the questions:

... sets up the proposition in quite an obvious way, with legalisation and regulation implicitly presented as the prudent and responsible course of action: “controls” versus “no controls".

It’s not dishonest: it’s literally the argument most of us make for reform. But it has very probably had a bearing on responses, and was crafted with that in mind.

Well, Horizon and Helius have published another poll, using the same questions and structure, and it really does seem to show a rising trend towards a "Yes" vote in September: 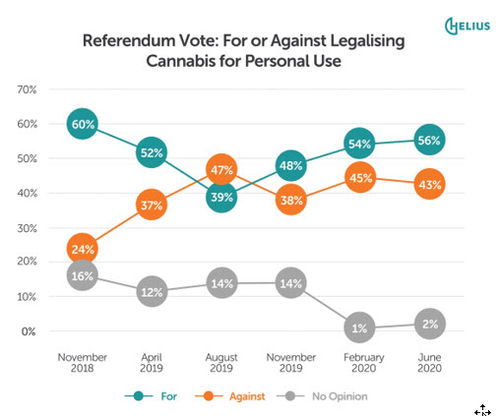 There's a difference in the way the reports are reported though: in Horizon's release on this latest poll, results for the question At this time, do you think you will vote for or against legalising cannabis for personal use in New Zealand? are listed before those on prohibition and its outcomes in New Zealand, not after. I suspect that doesn't actually mean a change in the order of the questions, but I'll check.

The actual overall increase in intending "Yes" voters is modest: from 54% to 56%. But that's up from 39% in August last year. And there are increases over February regardless of who respondents voted for in 2017. Striking increases in support among Act voters (from 45% to 70%) and New Zealand First voters (from 46% to 53%) may reflect a small numbers problem, but even among National voters, 31% would be prepared to overlook partisanship and vote "Yes", up from 27% in February.

In demographic terms, only the over-65s aren't showing majority support for reform.

What's happened between the two polls? A sharp tilt towards Labour in party voting intentions for one thing. But Horizon polled its panel between June 4 and 10 – days after the New Zealand Drug Foundation's 'On Our Terms' campaign launched on June 2.

The message of the campaign is very clearly emphasised on its home page. The page leadline is: It's time to take control of cannabis on our terms. The referendum is characterised as the Cannabis Control Referendum. It lists 8 key control measures of The Bill. And that's all above the fold. The word "control" is further emphasised with the use of colour.

This aligns with the way the Horizon poll questions talk about Controls over growing and selling personal use versus Continuing with no controls.

I don't think Helius and the Drug Foundation are really colluding over this – they're simply discovering what argument resonates with the public in their research.

So we're not only seeing a steady increase in support for reform – albeit in response to a poll structured to cultivate that support – we may also be seeing what the winning argument might be.

The challenge for reformers as September approaches will be to keep that the argument – and, ideally, to separate that argument as much as possible from political partisanship. In the run-up to an election, that might not be easy. But it's becoming clear that's the job.