Like almost everyone in the Western world, I remember 9/11 vividly. I woke in the morning to the rolling TV coverage and the collapse of the Twin Towers on repeat.  Terrorism met the Age of Spectacle in a purpose-planned event.

Part of the reaction came from unexpected areas. There were 9/11 jokes circulating within the US by the 12th September 2001 and recorded on a Dutch website by the 13th. There were howls of outrage when an American comedian tried a 9/11 gag a month later at a Friar’s Club celebrity roast for Hugh Hefner. “Too soon,” members of the crowd called out.

9/11 is part of contemporary consciousness. Twelve years later it still holds resonances that cannot be escaped but they are not all funnelled into an authorised mould, hallowed by the memory of the dead. Even in the United States, echoes of the September 11th event have moved into areas of vagrancy, far from officially prescribed reactions.

But how soon was too soon for kids in Twin Towers costume? When is a 9/11 cake safe to bake? What about a Twin Towers Lego model? An Indian man with a 9/11 pictorial shirt? 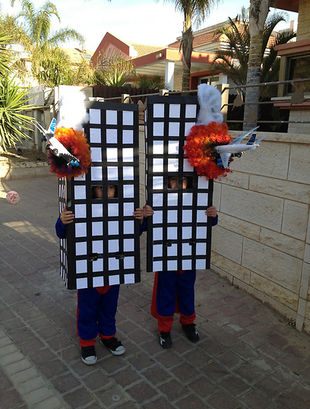 “Purim has begun, and just like with Halloween, children around the world are proudly parading around in their inventive costumes. This is one of the best times of year for our youngin’s- dressing up, going to parties, playing with friends, and playing make-believe… but what about the poor kids that are used as models for their parents distasteful creative endeavors?

Enter Ilay and Nehaoray, seven-year-old twins from Israel whose parents “playfully” decided to dress their children up in famous twin costumes: the Twin Towers. Not only are the kids dressed as the famous New York City buildings, they are fashioning the structures while on fire… with the planes sticking out of the side right near the children’s eye holes.” 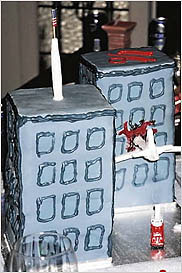 “This is the controversial fruit cake that Perth Royal Show officials don't want people to see.

Last Monday the show's chief executive, Bruce Rathbone, had it withdrawn from competition.

"I was asking people what they thought of the show and everyone was really positive, except they kept telling me how offended they were by the cake, especially people with young children," Rathbone said. "One father had real trouble with his children after September 11 because they were so traumatised by the television footage. The fruit cakes had brought it all back for them."

It was created by a man calling himself John, a former Sydney academic now living in Perth, who reluctantly spoke to Spike yesterday.

"I prefer to remain anonymous," John said. "The story is not about me. I don't have to put my name to something to make a political statement. I was a little bit surprised by the reaction and I didn't think the cake would hit the press the way it has. I was hoping to stimulate some debate about what the image of September 11 means to us while people are thinking about going to war with Iraq.”

"It is an iconic image of our time. I think a fruit cake is perfect because people aren't expecting to see that when they are looking at cakes. I wasn't trying to be a smart arse ... just trying to make people think."

The cake, the first John has baked, took several days of trial and error to get right.

"There are four fruit cakes in each tower with dowling rods through the centre. The towers are coated in strawberry jam and I applied the icing to the jam to make it stick. The plane is made out of icing and the wings were attached with spaghetti. The hardest thing was getting consistency of colour." 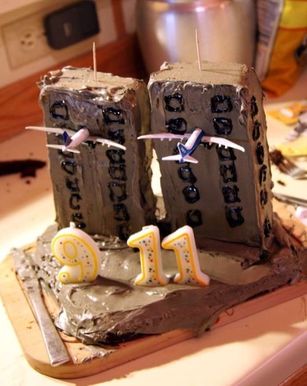 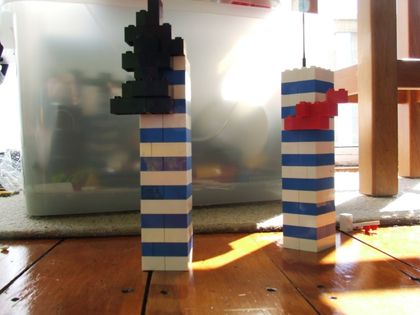 “Here is a never before seen preveiw of my Lego world trade center ones just been hit the other got hit about 5 muinites ago and fully smoking.” 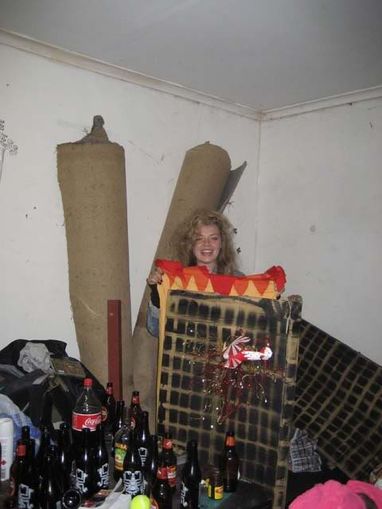 6. Block By Block (With Hand-Held Planes)

“A stop motion animation on the events of 9/11 in New York City.”

7. And Suzie Was Shocked 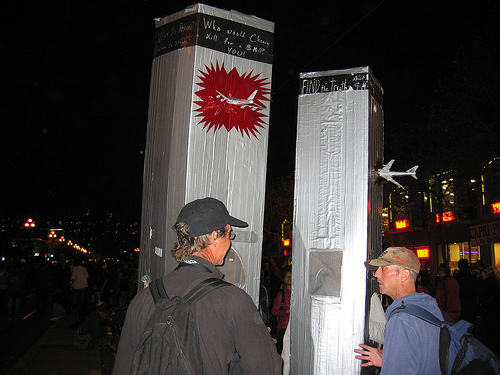 They wore them out on the street.

They were 9 feet tall.

And they were SO MUCH BETTER THAN MY 9/11 COSTUME OMIGOD THEY ARE AMAZING I AM SO JEALOUS." 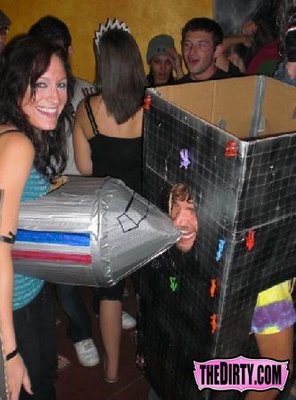 "Do you need another example of how far down the memory hole 9/11 has become?

A website entitled The Dirty posted the photo above taken at a University of Arizona Halloween party of an airplane crashing into one of the Twin Towers of the World Trade Center. Notice also, the plastic figures of people falling from the "building."

"...when the girl was asked if she thought she would offend anyone she replied, “No, it’s cool, my aunt died on the 64th floor, and it was a conspiracy anyway.”

I'll bet you made your aunt proud, you dingbat!

Is it any wonder that jerks like these may have also voted for Obama, and been the key to his win?" 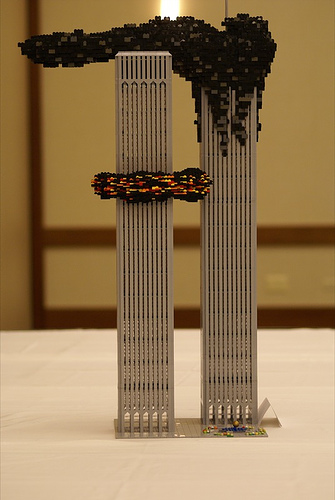 “I set myself apart from other WTC builders by making mine the 9-11-01 WTC.  The impact section did not turn out to my liking, and up close looks like a donut.  Sadly, that is also the section that took the longest to create.

The black/red/yellow/orange impact area took the longest because it required me to study photographs closely.  It was depressing, and I unintentionally took weeks off from building.

My Lego World Trade Center breaks down into about 7 pieces -- plus the removable antenna and fountain sculpture.  Here she is all packed up and ready for our trip to Chicago.  Yay!  Attending BrickWorld's 2007 debut event 720 miles away was a last-minute decision.  I spent 8 months building these towers, and completed the smoke and top sections in just the last 8 days.

First night at BrickWorld, ready for viewing.  This photo by Joe Meno. The BrickWorld display card is facing to the right with my name, sculpture title, and "creator's thoughts."

This is a great shot that captures the image I was aiming for.  It is distant, the way the towers were viewed in reality, and accurately portrays that iconic image of that day.” 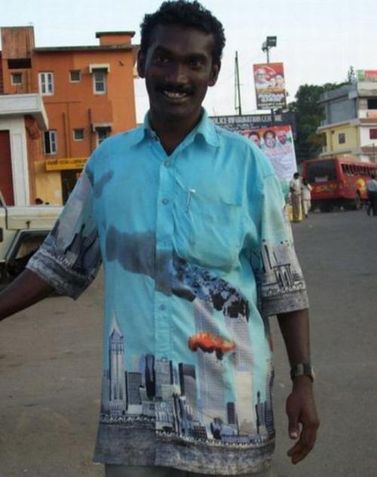 “We get that people use their clothing to make statements. But we don’t like this one, not one little bit.

We don’t know who, and we don’t know exactly where or when, either, but someone made a simple men’s shirt and used a photo of the World Trade Center towers exploding on September 11, 2011 as a print. We hate to assume that this shirt in particular was meant to glorify the moment, which still haunts and angers so many people all over the world, but we can’t imagine that the shirt was made in tribute to those lost in the attacks, either.”