Smell is probably our most culturally neglected sense. We prioritise vision and hearing, and our words for them are numberless, with many careful distinctions. Smell, on the other hand, is comparatively a great unknown, without a general language or the ability to enunciate subtle distinctions. An entire history is undervalued and left undescribed.

In human culture, the ability to change our bodily smell came early. By the Bronze Age, 4,000 years ago, production of perfumes was already on an industrial scale in Crete. Later, the ancient Near East, Egypt, and Rome all had extensive and international commerce in both olfactory raw-materials and manufactured fragrances.

Despite this history, perfumes generally remain in the realm of unconsidered economic products, items in a store without cultural critical apparatus or analysis, intellectually ignored except in the most basic terms.

And nowhere is this clearer than the most neglected factor in our perception of perfumes – time.

A perfume is composed of aromatic substances with differing volatility or evaporation rates. As an applied perfume ages from moment to moment, it smells differently. Perfume happens in time, fundamentally, in a physical sense.  A skilled perfumer utilises this dimension in creating a fragrance, and the perfumes of the Guerlain family are an exemplary demonstration of this temporal dimension.

As well as being concerned with time in its fragrances, Guerlain has been a family company, with successive generations of family perfumers from 1828 to 1994, when it was purchased by luxury brand LVMH. Some of Guerlain’s readily accessible fragrances are more than a century old. It is possible to smell, for instance, 1889, 1906, 1912, and 1919. The label is an olfactory history in itself. 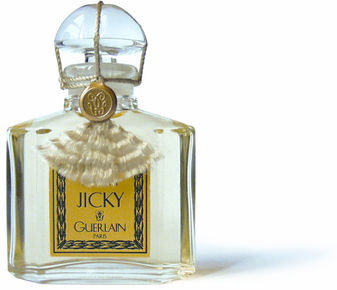 Jicky (1889) is the oldest commercial perfume still in production. It came from a period in which the first artificial colours were discovered, like mauve in 1856. Perfumery began experimenting with aromatic indoles created from coal after 1869. Jicky used the new coumarin and vanillin, alongside a number of natural ingredients. It was one of the first truly complex fragrances. The differing evaporation rates of its natural and synthetic components were utilised to create a fragrance that would not simply fade, but which would change over a period of hours.

Jicky presents this experience in its infancy – a fast sparkle of quickly evaporating volatile aromatics, a mid-range scent lasting for hours, and the dry-down base. It is a structure which has come to dominate perfumery  - although the so-called ‘linear’ fragrances, perfumes that smell exactly the same from start to finish (for example White Linen by Estee Lauder and Eternity by Calvin Klein) have made periodic appearances since the 1940s.

Perfume, in short, is a chemical narrative.

Aimé Guerlain’s Jicky was the opposite of the flower-scented fragrances that had preceded it. It has a rich odour (predominantly lavender and a deliberately chosen impure grade of the synthetic vanillin) with startling citrus aspects, at least initially. There is also the first hint of the base that would come to be known as the Guerlinade.

As the volatile aromatics evaporate, the Guerlinade accord remains. It is the layer of fragrance that gives the Guerlain perfumes their family resemblance. While it mutates with individual Guerlain fragrances, it is an identifiable ‘finger-print’ of the brand.

The Guerlinade would be the family’s secret for the next century, underlying their best fragrances with a skin-hugging nuzzliness. The Guerlinade is sweet (and even ‘sticky’ in early Jicky version), but is tempered with odd blurred high notes. It is deep with spice. It is familiar, intimate, and rich. It makes the best Guerlain fragrances completely unique.

Jacques Guerlain would become the family’s third major perfumer, and the most masterful. He created a range of fragrances whose complexity and narrative make them peerless in perfume history.

Après L'Ondée in 1906 and  L'Heure Bleue in 1912 were the first of Jacques Guerlain’s perfumes to achieve lasting renown. They were the precursors to the great 1919 Mitsouko. 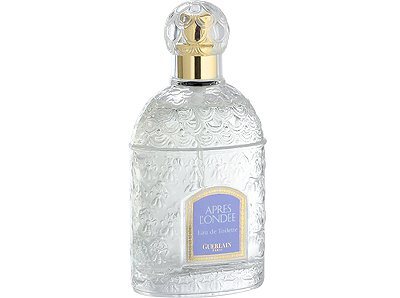 Après L'Ondée is the scent-equivalent of an Impressionist watercolour. It has the fascinating appeal of an apparently minor work that is a masterpiece. Initially water-lit, melancholic and funereal to some degree, it is develops swiftly with a strange resolution. The violet notes are twisted and ramped up by the synthetic heliotropin.  Après L'Ondée has a subtlety that ends up broadcasting wide-beam with a single pitched note.

Fragrance chemist and critic, Luca Turin has referred to Après L'Ondée  as ‘one of the twenty greatest perfumes of all time.’ Culturally, it feels inimitably French - it is hard to think of another nation that could have created this particular accord and make it work. It is soft and rainy with a vibrant heart of fused metal. 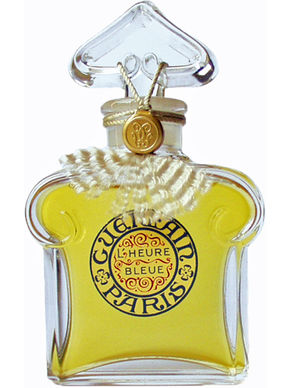 L'Heure Bleue is a vastly different fragrance - bigger, drenched, and richer. It is a maximalist fragrance compared to Après L'Ondé’s restrained notes.

Using aldehydes for the first time, Jacques Guerlain’s L'Heure Bleue has a hint of the later Chanel No 5, which would ramp the aldehyde-levels up to saturation point, giving the Chanel its singular predominantly abstract base. However, L'Heure Bleue layers the aldehydes with intense orange blossom, vanilla and incense, and where Après L'Ondée  is fluid, L'Heure Bleue is powdery.

L'Heure Bleue is also a fragrance with an intense sillage – the wake a perfume leaves in the air behind it. L'Heure Bleue  trails like the skirts of an Edwardian dress. It is also one of those rare perfumes that smell just as good on the skin the morning-after.

Both L'Heure Bleue and Après L'Ondée  are complex. They both modulate temporally, offering difference with development. It would be a technique that Jacques Guerlain would further refine and bring to triumph with Mitsouko (1919). 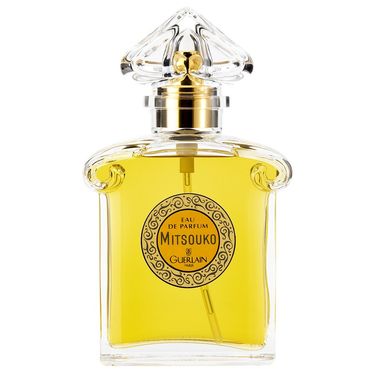 If Mitsouko was a book, it would be Proust’s seven volume masterpiece devoted to Time - A la recherché du temps perdu. Mitsouko has an unparalleled perfumic narrative. Jacques Guerlain created a fragrance with a developmental span of at least eight hours, if not longer. It turns with duration, revealing new facets with a surety that has never been repeated. It isn’t just the fragrance’s longevity on the skin, it is the changes that are rung – continually and interestingly. It juxtaposes and recombines. It feels alive and responsive.

Mitsouko is a chypre perfume– a compound of citrusy top-notes and an oak-moss base. There is, at least initially, a peachiness. It is certainly and recognisably a member of the Guerlain family. But where Mitsouko differs from other Guerlains is the enormous story it tells – differing aromatics seem to roll in on tides - citrus-resinous, sweet-amber -resinous, and bitter-resinous. Sniffing a wrist periodically after an application of Mitsouko, one notes the different elements as they pop-up to temporary dominance and recede, only to be replaced by another. Mitsouko evolves with startling skill.

But Guerlain has now lost its family ‘nose’. For the first time the label is not under Guerlain family creative control, and along with EU rules, many of their perfumes have been reformulated to avoid allergens. Mitsouko, for example, was reconfigured in 2007, to avoid the ‘oak-moss’ accord, which was banned by EU regulation, just like the rectified birch tar in the famous leathers like Chanel’s Cuir de Russie. While many of the reformulations have been successful, it has led to a thriving trade in ‘vintage’ bottles.

Wearing a ‘good’ perfume is an essential luxury. Wearing a bad fragrance is worse than wearing none at all. Education in scent is as easy as making repeated visits to a perfume counter and taking advantage of the opportunity to use a free product - perfume counters offer spray-on samples. Knowledge comes from experience, and the consequent educated pleasure is part of a life well-lived. Smell may be the final frontier of sensory exploration, but it richly repays effort. The products of the Guerlain brand in the early Twentieth Century are one of the great rewards.