This week in Parliament, John Key repeated one of the lines that looks to be central to its election campaign in 2017. As we’ll see, that word “lines” probably has one too many n’s in it. Anyway, here it is:

Rt Hon JOHN KEY... One of the ways we have seen [more people being able to buy a home] is that interest rates have halved under the National Government's leadership. They are now 5.4 percent…. So if we were under Labour, those people would be paying $16,000 more after tax.

Later, Metiria Turei pushed Key on the brazenness of this claim later in question time:

Metiria Turei: Surely the Prime Minister is not trying to take credit for low interest rates, when they are happening all over the world because of weak real economic growth, both here and overseas?

Rt Hon JOHN KEY: One of the reasons why interest rates are coming down in this country is that the Government has done a good job of getting the books back in order and of managing inflation expectations.

Now, interest rates are certainly lower in New Zealand than they were ten years ago. But that’s got almost nothing to do with the New Zealand government, despite Key’s adamant, repeated claim of credit.

Here’s some evidence I’m right and Key’s wrong. I pulled historic OCR figures from the Reserve Bank of New Zealand, and also historic Fed Funds rates in the US. They’re shown, since 2000, in the chart below. 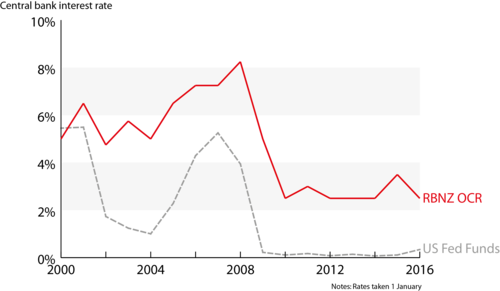 The pattern is unmistakable – interest rates rose though the heart of the noughties in both places, then dropped hugely around the time of the GFC. Since then, both places have had low, steady rates.

And the vertical gap between the two interest rates is reasonably steady across the period, too. Yes, there are little 1-2 year blips you can explain with regional-specific events (eg. aftermath of Asian Financial crisis, 9/11). But the broad trend is pretty clear – New Zealand and US interest rates move together.

In fact, we can calculate the average difference between New Zealand and US interest rates across the current government’s term and the previous Labour government’s term. Any change in that difference might be interpreted as the impact a local government, either here or there, might be having. Ready?

So much for Key’s central lie that: “if we were under Labour, those people would be paying $16,000 more after tax.”

Instead, the best estimate from the evidence says if we were under Labour, those people would be paying $0 more after tax.

Key, more than most, knows this full well. But he chooses to peddle economically illiterate nonsense to the country anyway. People will draw their own conclusions as to why.

Key is treating New Zealand’s fourth estate as if they were innumerate fools. He’s making self-glorifying claims he knows to be false, gambling that nobody will call him on it.

He’s gambling nobody will speak the truth to his power.