Today, media ubiquity Mike Hosking took to nzherald.co.nz to vent his frustration at Labour for suggesting that it would re-convene the same Tax Working Group first used by National. He was clearly very upset.

For Mike, Auckland’s housing crisis is a “so-called social issue,” showing just how closely Hosking empathizes with plummeting home ownership rates. That crisis affects every group other than the richest 10%, as illustrated today by an impressively depressing chart on Stuff: 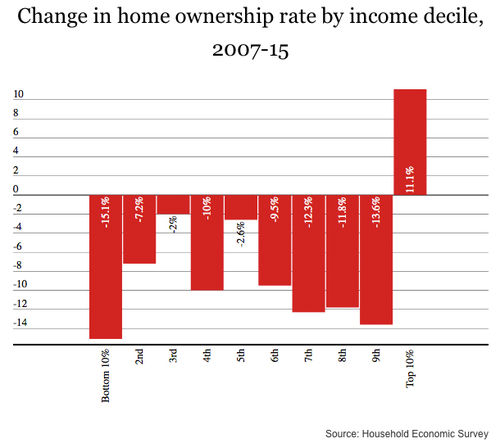 On some of the other “so-called social issues,” Mike darkly intoned:

If you want to argue that we need to pay more tax to fund more health then you will be paying more tax literally forever, because social issues can be a bottomless hole.

And then we get to Mike’s coup de maths. Ready? Here he goes:

Given the top rate is 33 cents, and the top rate now kicks in at the average rate in Auckland. And then you add GST on top of that, the majority of your money, in other words more than 50%, is handed over to the government.

Oh boy. Where to begin.

First, Mike’s wrong because a person on the average wage in Auckland pays 33 cents only on the last few dollars of their income, not on all of their money.

In fact, a person on a $78,000 salary (one recent estimate of the average Auckland salary) pays a grand total of 21.2% of that in income tax, not 33%. You need an awful lot of GST to get from there to “the majority of your money.”

The only way Mike could be right here is if GST is magically changed to be chargeable on other taxes, mortgages, rents, and trips.

And third, even if we granted Mike his fantasyland where GST covers every last cent of your income, even when you spend it on tax, mortgages, rent, or Tahiti, then Mike’s still wrong because 33 + 15 isn’t more than 50.

These are the kinds of nonsense arguments commentators make when they’re ideologically wedded to the notion that any more public investment by way of tax is always bad.

Mike actually sums his view up quite pithily. He says of Labour:

Politically, I know which side wins that particular debate.

Given Mike's firm view that “arguments for more tax always lose,” I guess he gets pretty confused about whether tax-increasing leaders like Helen Clark, Barack Obama, Tony Blair, Bob Hawke, and so on ever actually got elected.

Perhaps they were all just a bad dream.