All over the world there are two kinds of city rail stations. The first are the ‘end of the line’ stations like Britomart as it is now. And the one that all the Wellington bureaucrats use, ending as it does right where they work. The overseas models for these are the grand palaces built in the 19th century for the important comings and goings of inter-city travel. When they were new these were an ambitious and invasive new architecture rammed through old neighbourhoods; dramatic and transforming. And now like St Pancras in London and Gare du Nord in Paris they are booming again as modern high speed electric rail is on the rise. Known to the locals as ‘Big Train’ stations.

The other kind is the more humble metro station, named after the queen of all city systems; the Paris Métro. These stations have the reverse characteristic of their big siblings, the critical feature here is that they do not terminate, they are not the final stop. They are a through route, a way to elsewhere, for more humdrum and less predictable movements. Less Grand Central, but rather, Tooting Bec or Knightsbridge. These are parts of networks designed specifically not to tell you your business. They provide flexible and variable movements, fast, clean and efficient, unencumbered by the traffic above to get anyone, for whatever reason, snappily across town. Workaday.

Curious then that in both Wellington and Auckland there are networks for local train travel grinding to a halt at terminus stations. Wellington is of course a strange place, both geographically and because of that peculiar industry, government. But Auckland is without excuse, except of course, for the meddling of Wellington. Because let’s face it, Britomart is no more the centre of Auckland than Waterloo is of London. But like those London stations it is a centre.

So what’s with the stopping? It’s as if the southern motorway ended at say Nelson St and every car had to stop there reverse home again at the end of the day. Surely even the suits at the Ministry of Transport can see just how ludicrous this is.

Fixing this hopeless blockage is the main reason for building the City Rail Link. The plan is to continue the soon-to-be electrified rail lines out of Britomart, under Albert St to a new station between Victoria and Wellesley Sreets, smack in the middle of town.

It then heads on up the hill to another below the intersection of Karangahape Rd and Pitt St. Then under the motorway to a new Newton Station. Perfectly sited to deliver and retrieve punters not only from the Powerstation and Galbraiths Pub but also the tonier diners at The French Café.

And then, the coup de grace, connecting to the existing lines near the Mt Eden Station to transform the three disparate limbs of Auckland’s network into an coherent whole. It is often called a loop, but as the trains won’t go round and round in a circle and it does close the crucial gap in the system, ‘Link’ is really more accurate.

Trains will still travel from distant places like Papakura or Swanson, but instead of getting to the bottom of town and going back the way they came, they will travel through the city and on to the opposite end of Auckland. Passengers are not assumed to only be heading into downtown but rather to any point across the network.

In addition a new programme of feeder buses to refurbished stations at places like Panmure and Manukau City mean more and more people will be able to access the advantage of fast and direct travel. Next year sees the introduction of real integrated ticketing to all public transport services in Auckland which will enable transfers between different routes and modes all for the price of a single journey so we can expect the already spectacular growth in rail use to skyrocket further.

Currently network patronage is growing at over 20% a year and will very soon hit a ceiling that it will not be able to pass through until the electric trains are operating around 2014. But because of the limitations of the dead-end at Britomart it will almost certainly be at capacity pretty much immediately then too. Until the link is built.

And once it is we can then get on with the other obvious low hanging fruit of this network, completing the Southwestern Line between Onehunga and Manukau City, serving Mangere and of course all those workers and travellers at and around the airport. In one go providing a fast and predictable connection from most of Auckland to these important destinations. But the capacity this line will generate cannot function without sorting out Britomart first.

Other benefits will flow for the Link too. The new stations to deliver people to, from, and between more parts of the city silently and without cluttering up the streets above. Aotea, the midtown station, is likely to become busier even than Britomart, speeding millions of people each month to a variety of city destinations; The Universities, Sky City, the Art Gallery, The theatres around Aotea Square, and all the shops and offices of central Auckland.

The Link will allow the growth of business in Auckland to occur unrestrained by the otherwise clogged city streets, while also helping to improve both air quality and street-life. While opening up more space for the growth in bus numbers from the North Shore, by reducing those from the parts with the new rail links. It will also mean capital and land will not be lost to providing yet more unproductive car parking.

The two new southern most stations, K’Rd and Newton, will stimulate these undervalued and underperforming city fringe areas. Because unlike a new city motorway new train stations increase foot traffic and property value. And travellers on the Western Line will arrive at all three city stations and Britomart much quicker than they do now as the new route takes out the inefficient dog-leg to Newmarket.

For example a trip form say Moringside to central Queen St will reduce from 28 minutes to just eight. Improving productivity for these commuters, or perhaps allowing them a valuable longer lie-in.

Still, the best thing by far is that Auckland will suddenly have a real interconnected network. A Metro. Not an intra-city service trying to operate on an inter-city layout. While it is only adding 3.5km to the total network it is the key to unlocking the value already inherent in the whole of the existing asset but currently out of reach. And even though because the new link is underground it will be an expensive 3.5km this offers a lasting value way beyond its initial outlay.

Sydney built the bulk of its underground in The Depression, the heart of the New York Subway and the start of the Paris Métro are well over a century old now, London older still. These are extraordinarily long lived and enduring investments of extraordinary value for a city.

Vitally too, a functioning and expanding electric network adds important resilience to our biggest city in an age of uncertain and increasingly expensive oil supply.

We already spend more on imported oil than we earn from dairy exports every year and should be making every effort to reduce our vulnerability to this finite resource. Here is a proven technology and a project ready to go that will enable millions of journeys to be powered by our own renewably generated electricity. Clearly this is a prudent investment.

All New Zealand needs Auckland functioning as well as possible, source of 36% of our GDP, so this is truly a project of National Significance. And an urgent one too if we are to prevent the clot that is forming in should be the heart of a dynamic 21st century Auckland.

Transport is the one sector that has large sums of money available for big capital works. In the recent Government Policy Statement a figure of around $17.5 billion has been identified as available for new transport infrastructure over the next ten years. Clearly there is the ability to unlock the Auckland rail network with some of this? Only a very reckless gambler or a crazed ideologue would aim spend this resource entirely on an all-in bet on yet more motorways, surely? 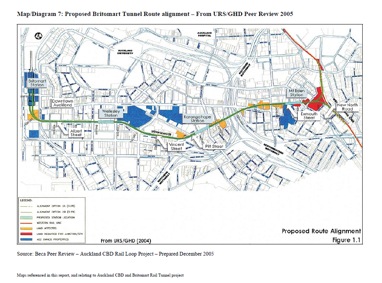