My friend's mum died this week. Since he told me, I've had the strongest memory of walking into her house a few years back and being hit with the smell of soup on the stove top. That smell that only comes from food being cooked slowly over a number of hours. The combination of meat and vegetables and seasoning that permeates the entire house as it cooks.

I don't know why that's my first and strongest memory when I think of her. Or why that memory hit me as hard as it did. There were plenty of times at the house where food wasn't being cooked. And that soup certainly wasn't a common smell.

But that soup is what I've been smelling all week.

Algeria's chosen dish is nothing like that particular soup. But it's cooked slowly, with chicken and a good amount of spices. That scent that, after a few hours, pretty much invades every space of the house - that's the same.

I don’t own a tadjine. I also, as yet, don’t own a pestle and mortar. My pantry is also lacking a number of ethnic spices. This whole project will wind up being an expensive one, I think. But my kitchen will be a place of culinary dreams by the end of it.

For now though, I’ve heard a slow cooker will do an okay job in place of a tadjine, and pre-ground spices will have to be the go.

Eating disorders and “safe foods” are a weird concept. Void of logic. Every person will have a list of some sort of food that is safe. If they’re in a situation where they need to eat, they’ll beeline for those foods. And they’re always bland. Dry toast or completely unflavoured oats. Chicken or salad without a hint of salt or dressing. It’s almost like spices make food taste better, and people with eating disorders are completlely wrapped up in a world of food as punishment and reward. Food that tastes good, therefore, isn’t “deserved”. I know, right? I did say there was little logic when it comes to eating disorders.

Which, I guess, is one reason that this recent food journey is one of excitement. Chilli and heat is something I've discovered makes food taste amazing. Salt is God when it comes to flavour. Oil and seasoning on salad males salad pretty damn incredible.

So as Algeria rolled around I discovered I'd get the chance to try something totally new to me - saffron. When I asked for it at my local spice shop the diminutive woman reached underneath the counter and displayed a tiny plastic container full of the stringy red spice. Half a gram for $5 she told me, and refused to put it on the counter until I paid. I felt like I was buying something slightly more illicit than saffron. Told myself not to screw it up as I walked out with it. I get the impression this is the kind of stuff I'm expected to look after.

It didn't smell of much, surprisingly. A bit earthy, but an incredible dark red colour. 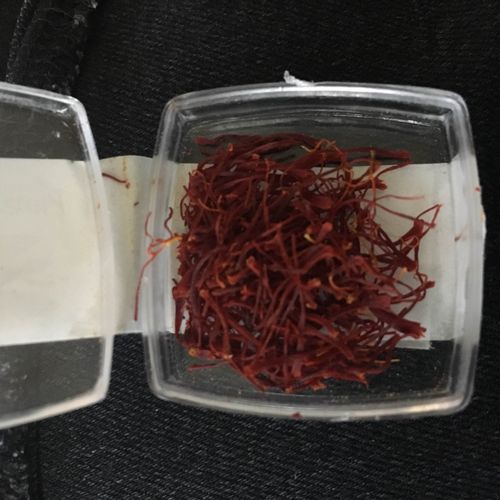 Bordering the Mediterranean sea and the Saharan desert, Algeria’s neighbours,and culinary influences, include Morroco and Tunisia. The food in Algeria seems to be also heavy on stews and long, slow cooking processes, though with more heat and spice than the previous countries.

For my chosen dish, Tadjine Djedj b’ Zeitoun (I’m keeping the name – Slowcooker Djedj b’ Zeitouun doesn’t quite sound so ethnic or impressive), I'm basically cooking chicken slowly in water and spices (it's one thing I've noticed so far - stock is never really used for the ease of extra flavour - time is the key to flavour), adding spice and olives later.

Having never even tasted harissa, I decided to go full authentic (well, as full authentic as one can get without a mestle and porter) and make my own. It’s easy, and has since become my new favourite additions to meals.

Ground (in the mortar and pestle of course …) chilli, salt, pepper, cayenne, coriander seeds, cumin and garlic are mixed in a pan with tomato paste. Olive oil is added and mixed for a bit. A paste forms which then become a flavour base for whatever dish you may be making. And the smell of the heat from the chilli is that amazing hit up heat that gets right into your sinuses as you’re cooking. There are different versions of harissa floating around, so find your favourite and roll with it. Well worth it and keeps in the fridge for about a week apparently (mine didn’t actually last that long.)

The dish itself is incredibly simple. Chicken browned in a pan and transferred to the tajgine (read: Breville slow cooker), harrissa, saffron, thyme, chopped fresh coriander and water goes in, and sits for a couple of hours. At this point chopped carrots, more coriander, juice of a lemon, a big handful of green olives and pepper to taste goes in and an hour later is ready.

A quick batch of cauliflower rice (or white rice if you eat it), seasoned with salt and corriander made the dinner complete.

If I were basing a world trip dependent on the cuisine of the country, I think I’d put Algeria on the list somewhere. The brightness due to the saffron (funnily enough that's really all it added) and the heat and flavour from the harrisa made this one something I think I'll be making a few times more.

And that smell? That permeating, homely smell that invaded the house throughout the cooking? It stuck around for  a while, even after eating.

That smell took me right back to my friend's mum's house again. 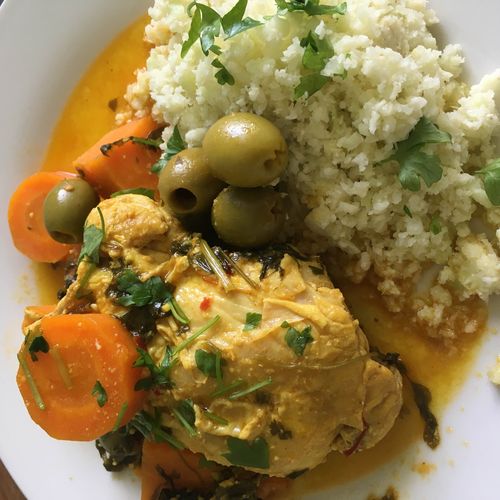