The report outlining Housing New Zealand's response to the harm caused by its misguided policies around supposed methamphetamine contamination of its properties is long and thorough.

It puts a number on the tenants harmed by evictions which were very largely unwarranted on any health and safety grounds. There were about 800 evictions and an average of three occupants per tenancy, so around 2400 people. Many of them were – often in their absence – ordered by the Tenancy Tribunal to pay compensation.

But the report also offers an important insight into how this could have happened. It came, ultimately, from the top. The "zero tolerance" policy on illegal activity within Housing NZ properties was adopted in 2004, during the last Labour government. But set against that was an explicit expectation from government that:

But that changed when the government changed:

By the 2010/11 financial year these programmes had ceased. Government expectations were focussed on value for money and improving the quality of expenditure across government. Ministers asked Housing New Zealand to explore ways to improve operational efficiencies, to deliver a return on its investment and to control its operating costs. Government required Housing New Zealand to implement an “innovative approach to tenancy management to ensure resources are directed to those most in need”. There was also an expectation that Housing New Zealand would pay an annual dividend to the Crown.

During this time the Government also began the Social Housing Reform Programme, with the intention of broadening the provision of social housing. The clear expectation was for Housing New Zealand to focus on its core functions as a landlord, with other agencies providing social services for tenants as required.

For all the talk – and it was endless – National's proposed reform of social housing never got off the ground in the sense of a meaningful broadening of provision. But Housing NZ did follow the instructions of the government of the day and reconceive itself as a property management company rather than a social agency.

And that's how we got to the point of actions being taken that were harmful  to the people who use social housing. The point where it was deemed reasonable to evict an entire family because one member may – or may not – have had a meth problem.

Some of the most vulnerable people in New Zealand live in Housing New Zealand’s houses, including not only the main tenant but also other household members and tenants’ families. The ending of a tenancy can result in flow on effects for these individuals that can be very hard to recover from, including homelessness. Despite this, Housing New Zealand has until recently taken a zero tolerance stance towards the use of methamphetamine in its properties.

Tenants deemed to not be responsible for the "contamination" in their houses were rehoused, but they represented only about a third of those evicted. And, as I reported in Matters of Substance two years ago, the basis for those life-changing official decisions was quite frequently no more than hearsay. As the report notes:

Tenants were, effectively, "convicted" of illegal activity without access to due process, on evidence that a court would, in many cases, have rejected.

This goes way beyond a simple misapprehension of the science. As I also revealed in that MoS story, Housing NZ's meth team actively considered going even further by requiring tenants to be drug-tested before being housed. The idea was rejected not because of its human rights implications, but because it was deemed impractical.

I do think it's important to note that Housing NZ had begun to move away from these practices even before Housing minister Phil Twyford asked the Office of the Chief Science Advisor to investigate the soundness of polciies around meth contamination. The parts of this new report that outline what Housing NZ is now doing differently are as important as the accounting of what it did wrong. I can, on that basis, understand Twyford's decision not to force resignations from the CEO and the board.

And when I was listening to Twyford field questions from reporters this morning about the lack of scalps, I did find myself hoping that the news organisations those reporters work for will also be taking a look at themselves.

Because there's a a whole other dimension to this story. And that's the way that a predatory testing and decontamination industry was able to sell its own meth-crisis narrative with the direct assistance of journalists and editors who simply didn't exercise the diligence their jobs should demand.

How many times did we hear or see someone with a direct commercial interest quoted as an "expert"?

An industry expert believes methamphetamine-infected homes could be the next 'leaky homes' crisis.

The head of commercial meth cleaning service Envirocheck says up to 20 percent of kiwi homes could be infected, with half of those at levels above the Ministry of Health’s guidelines.

Envirocheck head David Kilburn says it has the potential to be a huge problem.

Mr Kilburn was told the Ministry of Health estimates around 50 homes are infected every year, but he believes that’s a gross underestimate.

"We could find 50 houses contaminated every three months and we're just one company."

Mr Kilburn is warning homeowners that P can be found anywhere.

"[People tell us] the people we bought it off were an elderly couple, and they'd owned it for twenty years, how could there be meth in the house.

"[I tell them] what about your guests? Can you vouch for every single one of them? What about the elderly couple? Did they have any grandchildren come stay with them? Was one of their grandchildren a meth head?

"You just cannot be certain that meth hasn't come into your home. They may have done that outside and then walked in and the fumes have followed them in."

A couple of months later, in the Taranaki Daily News, the proportion of "contaminated" properties, again according to David Kilburn of Envirocheck, had swelled to 25%:

Envirocheck general manager David Kilburn said methamphetamine contamination was a serious problem with up to 25 per cent of houses checked showing the drug's presence.

"We are dealing with the tip of the iceberg at the moment," Kilburn said.

One session smoking the Class A drug could be enough to produce a positive test result.

"It may not contaminate the property to above the Ministry of Health guidelines but we've seen properties where meth has been smoked, perhaps in a party situation in the course of one weekend, in a book a bach situation, and the property has been severely enough contaminated to require quite extensive decontamination," he said.

Back in 2014, the Sunday Star Times was quoting Envirocheck's office manager on the health effects of methamphetamine:

Envirocheck office manager Jasmine Pruden said half of the properties they tested come back positive for drug contamination.

In the worst cases Envirocheck stripped the house to its shell.

Ms Pruden was also quoted in the Wanganui Chronicle:

Envirocheck office manager Jasmine Pruden said telltale signs that meth had been manufactured or used in a house include a "chemical smell" or "chemical discolouring" in places like the laundry or down window sills where chemicals have been tipped out.

Other signs to watch out for were dodgy wiring and plumbing, fire alarms that had been removed or missing light bulbs.

However, she said some cooks and smokers were "smart enough to clean up after themselves". "Sometimes you can walk into a property and it can look amazing, but it can be fully contaminated," she said.

And yet a simple Google search finds her qualifications on LinkedIn:

The Herald ran this nonsense without a byline:

MethSolutions director Miles Stratford has been testing houses for 3 years. Over that time, the number tested by his company had grown from a "handful" to more than 200 a month, nationwide.

But the proportion testing positive had remained at 40 per cent.

"That's everything from a little bit of use through to significant manufacture," Mr Stratford said.

"It's just like with cigarette smoke. That can get stuck in walls. It's the same as the vapour left over from meth smoking."

Clean-up ranges from $1000 to a few hundred thousand, with hefty replacement costs for furnishings, curtains and wall coverings too.

The story was accompanied with this absolute garbage graphic, whose "facts" about methamphetamine seemed to have been cribbed straight from a testing company website, possibly MethSolutions' own. 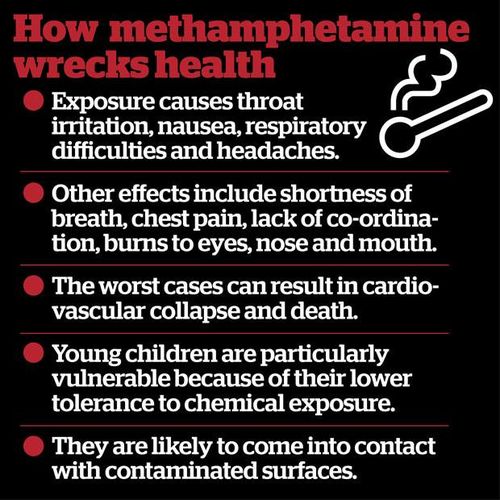 In many cases, the stories came direct from the testing companies, who had worked out that the news media would generally relay whatever bullshit they were offered if it made a good headline.

There have been, it's important to note, journalists who have done really important work in reporting this story in the past couple of years – most notably Benedict Collins at RNZ and Henry Cooke on Stuff. And it was RNZ's Laura Bootham who first reported the problems around the unregulated testing and decontamination industry way back in 2014. That was about the time that Joanne Kearney, then working at MBIE, became concerned at what looked to her like a developing scam. The information Joanne started collecting under OIA and from Tenancy Tribunal proceedings later became an important part of my story.

But in summary, let's say this: a major government agency has quite painfully held itself to account today. It would be good to think that today is also a day when news organisations reflect on their own performance.