In 1994, I was editing an ambitious street mag called Planet, from a fabled office at at 309 Karangahape Road. The thirteenth issue of the magazine was published in the winter of that year and its cover embodied a particularly ambitious goal: the end of cannabis prohibition. 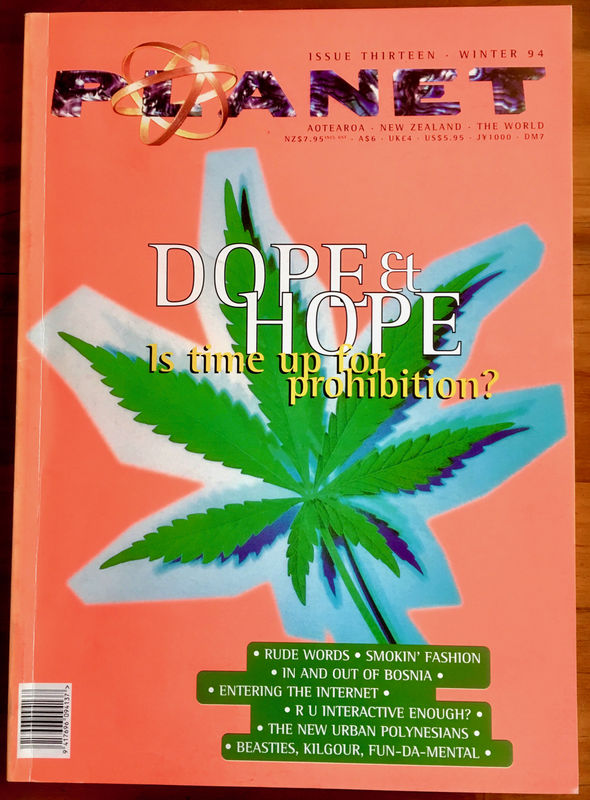 I wanted to do more than just call for reform. I wanted to show how thoroughly – a quarter of a century ago – cannabis was embedded in New Zealand culture. Paul Shannon interviewed Les Gray, the psychologist who had caused a national storm by calling for reform 10 years before, and wrote a piece about anandamide (this was before the endo-cannabinoid system had been properly identified). Dr Hamish Meldrum contributed a piece on the state of medical knowledge. Rick Bryant wrote about cannabis in literature, Stinky Jim covered the hits from the bong and Colin Hogg recalled shenanigans.

I interviewed "Ringo", a grower, and "Elton", a longtime dealer. (The latter story constitutes a fascinating history that, ideally, someone else will type up for publication here.) We got comment from the Drug Foundation, the Minister of Justice and the cop in charge of the annual cannabis recovery operation ("I tell you what, I'm not going to get into a decriminalisation debate. I haven't got the time, I've been down that track so many times before").

I also wrote the introductory essay that follows. I think it still reads pretty well. A few things have changed – most of us tend to refer to cannabis rather than marijuana now, and only Family First calls it "dope".

Cannabis has become even more of a social commonplace in New Zealand since the magazine was published. In 1994, we quoted the University of Auckland's Alcohol and Public Health Research Unit's 1990 finding that 43% of New Zealanders between 15 and 45 admitted to ever having used cannabis. But more recently the Christchurch longitudinal study of a 1977 birth cohort has found that 80% of these New Zealanders had used cannabis by the age of 25. If the goal of prohibition has been to eliminate or even limit the use of cannabis in New Zealand, it has comprehensively failed.

That's presumably related to perhaps the most significant change in our official approach to cannabis: that the police have spent the past decade coming up with ways to avoid prosecuting minor cannabis offences. A defence lawyer recently told me that police have decided that cannabis in itself is not a driver of other crime and they have better ways to use their resources. Increasingly, the courts are doing the same – people caught with some pretty big grows have been getting discharges. The law is more out of step with the priorities of those who enforce it than it has ever been.

Even the politics have shifted. In 1994, we got this comment from the office of the Minister of Justice Doug Graham:

The Government has no intention of introducing any legislation to change anything. This has been the Government's position for many years.

In 2019, Graham's party has moved from a firm "no" to a kind of bad-faith "maybe", which is progress of a sort. Labour is still hedging its bets, but has, with minimal fuss, seen through a significant amendment guiding police discretion over minor drug offences that would have been unthinkable in 1994.

The other big, global change has been a move towards regulated, legal markets in cannabis that would have been yet more unthinkable back then. And the political argument towards a referendum on that proposition is being led by a Green MP born in the year that issue of Planet was published. We have a chance to choose a solution that is right for New Zealand; to finally bring the law into line with reality. It really is time we got this damn thing done.

Time for a New Deal

Slowly, the coffin lowers. The deceased has a good crop of friends here, sending him off. He was killed in a road accident that was not his fault. Three or four friends throw a little marijuana in after it.

No one is quite sure whether the deceased has once demanded that this be done in the event or his demise or whether it just seemed a good idea, but everyone knows he'd have approved. He liked a smoke. He was Maori, he was a father. He was an ordinary New Zealander. But what would the police do if they were here?

That sort of thing doesn't happen every day. But it was hardly unusual. And still there are public calls to rid New Zealand of the scourge of marijuana before it "enters the national culture". These calls are usually tagged with a demand for even stricter legal sanctions on the use and distribution of cannabis. The sentiment and the solution have in common a remarkable naivete.

Like it or not, pot's sticky green threads have been irrevocably woven into the national tapestry for nearly two decades. Marijuana in New Zealand has a vocabulary, an etiquette, a code. In thousands of households it's no more remarkable a social lubricant than a cold beer. It is fixed into the culture – and it is not only New Zealanders who know it. Many of the young foreign backpackers who come here in their thousands have New Zealand Green on their list of things to do.

If parts of the feature that follows appear to celebrate marijuana, that is not the intention. Marijuana is a drug, with associated health risks. What we have done is attempted to document some of the culture that grows around marijuana, at home and abroad. Sometimes this culture is unpleasant – the gangsterism associated with the domestic trade in dope, for instance – and sometimes it is lively, colourful and valuable to us all.

New Zealand has internalised marijuana so thoroughly that its dope culture is rich and vivid, but herb culture is international. During the Soviet occupation of Afghanistan, kilo bricks of black, oily, Afghani hash – stamped, with gleeful irony, with a gold hammer and sickle – were being shipped all over Europe by rebel tribesmen. While the clamp of apartheid was still down on South Africa you could buy Transkei Super grass in Amersterdam coffee shops – all proceeds remitted directly to black farmers.

Whatever the surveys tell you, marijuana is back in vogue. New York's Village Voicenoted that it had greatly improved the atmosphere of some urban communities by largely supplanting crack. Hip-hop music has taken up the reggae tradition of citing "good" marijuana as the alternative to "bad" cocaine.

Germany decriminalised the possession of personal quantities of cannabis this year. In Britain, both the police and the judiciary have expressed blunt disdain for the vastly increased penalties for personal possession due to pass anachronistically into law this month. Meanwhile, British newspapers have been full of reports that representatives of an unnamed major brewery had been in Amsterdam researching the "hash cafes". Their problem is that young people are no longer going to pubs to drink alcohol.

But if you find the idea of booze companies pushing dope disquieting, consider it in the hands of those predatory purveyors of addiction, the tobacco companies. A tobacco company has already copyrighted the name "Marley" in anticipation of full legalisation in Europe. The Marley Foundation is extremely upset but, hey, that's business. This compounds the hypocrisy which has seen tobacco and alcohol companies fund drug "education" groups with the caveat that their products are not spoken of in the same breath as illicit drugs like cannabis. They do so not because they care, but to protect their market share.

There is in this country a large and profitable marijuana industry. In an era which has been characterised by massive deregulation of industry, this one industry has been regulation into the ground. Or, rather, straight into the hands of gangs to whom the laws mean only a coy monopoly.

And yet, there are serious health problems associated with heavy marijuana use, especially among adolescents. They're nothing to do with the scare stories of yore (chromosome damage, anyone?), but they exist. It would make sense for resources for health education and treatment to come from the marijuana industry. But the industry, a criminal enterprise, is currently what Treasury would call "revenue-negative". The courts cannot decently fine offenders enough to even cover the costs of prosecution.

But that is not the real problem. The real problem is that so many New Zealanders have reason to lie to and to fear the police – and even their neighbours. If they're unlucky (and as many as 200,000 citizens in the past decade have been) they draw the lifelong stigma of a criminal conviction.

The ramifications of decriminalisation in New Zealand are quite different – and arguably less complex – than those in Europe. It does not, for example, threaten the integrity of our borders. Were it not for expensive police helicopters and Crimewatch-addled nosy neighbours, New Zealanders who choose to could grow as much cannabis as they needed in their own backyards. So let them. Revenue? A grower's licence would be no more difficult to administer than the annual broadcasting fee.

The scent of marijuana is not absent from the corridors of power – there have been pot-smoking parliamentarians for some time and the professional sector is full of past and present users. But there is a habit still more endemic – that of compulsive fence-sitting. The climate of fear around marijuana extends even to talking about it.

Eventually, changes to the law can come only from the lawmakers. National, at least, has a clear and emphatic prohibitionist policy – although quite how its libertarian wing sleeps at night is open to question. Labour (notwithstanding David Lange) and the Alliance (notwithstanding the Greens) have been paralysed by the fear of an electoral backlash that probably does not even exist. That is no longer good enough, as recent statements by Labour leader Helen Clark seem to acknowledge. The hysterical response of her electoral neighbour, Christine Fletcher, to Clark's tacit support for decriminalisation served to show how deep the lawmakers' ignorance can yet be. The spectre of organised crime hovers over New Zealand only by default. It is a beast we must stop feeding.