Sometimes, you ought to judge a book by it's cover. It's kinda why they put a cover on it.

David Fisher notes that in one of Ian Fletcher's last speeches as the director of the GCSB, he quoted from Thomas Hobbes' Leviathan. Fletcher described Hobbes' social contract as:

It is where you and I give up our private right to violence to the state in return for a framework of order.

At this point, I'd like to show you a picture of a leviathan: 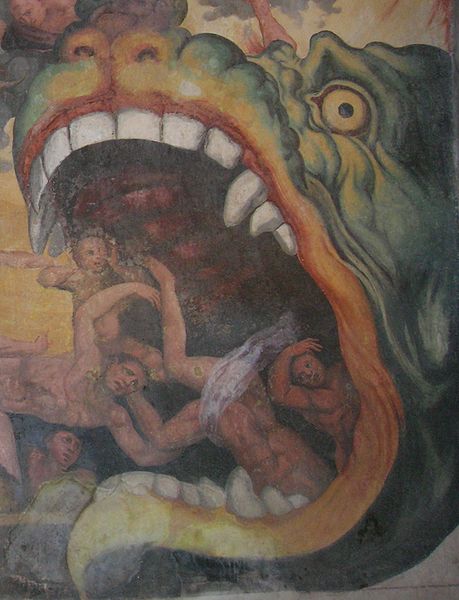 Hobbes didn't name his book after a biblical sea monster because it's a nice treatise on social contracts signed over a cup of tea, but because it's an argument for an all-consuming *absolute* sovereign - a giant beast that will swallow us whole. i.e. This dude, lording Godzilla-like over us all:

Hobbes' logic was that:

... therefore, we ought to be prepared give any and all rights (except for our lives) over to the state, so that it can protect us. That's not "the private right to violence", but everything. Everything we have, everything we can give, everything which makes us who we are. This is what is depicted on the cover of Leviathan.

The point here is not to gripe about the former GCSB director misinterpreting 17th century political philosophers, but to understand where Hobbes' logic led him, and where our current terrorists-under-the-bed logic leads us.

Those who would give up essential Liberty, to purchase a little temporary Safety, deserve neither Liberty nor Safety.

Underneath the fiery give-me-freedom-or-give-me-death rhetoric, he left enough wiggle room to trade freedoms for safety, as long as the freedoms weren't essential or the safety more than temporary.

It's a pragmatic approach which recognised that safety is important, but not absolute, and that our freedoms are worth a lot. It's a trade-off, which seems far more reasonable than Hobbes' idea that we should cling to safety, whatever the cost.

The Leviathan does not comment on security matters. It just does it.

Hobbes was describing an ideal absolute monarch, but that was where we were at, pre-Snowden. We entrusted the security apparatus with security, and they did whatever they deemed necessary. We had no say in deciding whether we are prepared to give up these freedoms, because we had no idea that we were giving them up in the first place.

But post-Snowden, we get to see the sum on blank cheque we signed.

Maybe the price isn't so high, because privacy of communications isn't really an "essential liberty". That seems to be a common sentiment. But consider how batshit that idea is in the context of the Cold War. Freedom from mass surveillance was one of the defining features of liberal democracies, a feature which set them apart from police states. It was important because it set clear boundaries on state power; beyond that boundary was the space where private citizens could go about their lives freely. The state had no business in our homes, in our communications, in our minds. That was what we meant by freedom.

What does it mean now?

We mythologise wars and the courage to die for freedom. Simultaneously, we are unfazed to give up those freedoms, because of the fear of terrorist attacks. Which one are we? What do we value?