So when I first embarked upon the mission of relocating our house from Christchurch's Residential Red Zone to Dunsandel—and the subsequent repair and restoration work—I had a grand plan of writing all about it.

According to my plan, as each task was completed, I would illustrate my achievements with magnificent photographs, and provide a light-hearted commentary of my rapid progress, tribulations (minor), and ultimate triumph.

The problem with this plan, however, is that I have not yet fully finished anything on the house. I reach about 95 per cent completion on any job, and then circumstances force me to move onto the next-most highly urgent task. For example, the outside of the house is painted to a weatherproof level, but not all the same colour—because I only had time to paint the three-quarters of the house that genuinely needed painting. Similarly, the driveway and paths around the house are almost completely cobbled, except for the last few square metres, when my 38 tonnes of cobblestones (shifted from our old section in Christchurch) ran out, and no similar ones could be easily obtained.

Inside the house almost every room is finished—but not entirely. I have a missing piece of dado-rail here; a lost escutcheon there; one remaining door that needs stripping and varnishing; and (until recently) no system for hanging a hand-towel in the lavatory; and so on. Nothing, you understand, that affects the weather-tightness, structural integrity, or basic liveability of the house, but just (what seems like) hundreds of minor details to fix.

After the first year, my life as a reluctant builder began to take on a Sisyphean quality. It was a relief to relocate to the UK for four months, during which time my builder's grumpiness began to evaporate, and I was able to complete a few pieces of writing (there are half-a-dozen essays still to appear on Public Address). The night before we returned to New Zealand, Jennifer made me vow to develop a more relaxed schedule for my building work, setting aside time for writing each week, and thus becoming a less grumpy husband.

The instant we arrived back in Dunsandel, of course, my sincerely-made promises flew out the window. A misunderstanding with our house-minder meant that the lawns had not been mown for the many months that we were away. After a twenty-six-hour journey, I had to immediately fire-up the lawnmower, and spent the next four days getting it under control. 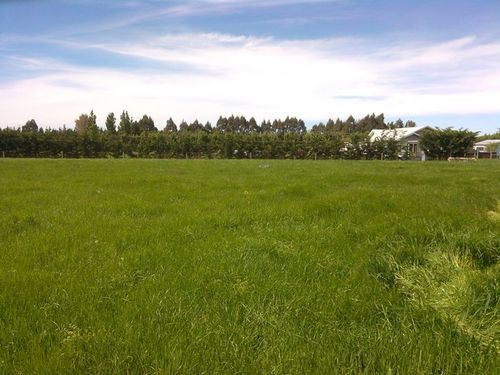 Above: The lawn doesn't appear to be that long—until you realize the blue bar is the top of the goalposts from a child's football set.

Then there were shelves and drawers required for the children's rooms. And new beds (standard boughten beds being too long to fit the Edwardian-sized gaps in the bedrooms) as well as several hundred trees to plant, and yet more painting of the exterior, and various bits of complicated joinery to remake, and how come we still can't hang a hand-towel in the lavatory? Et cetera, et cetera, endlessly, endlessly.

One of the slow-making aspects of working on an old villa is the timber—mainly rimu and kauri—which is hard to work (certainly compared to pine), hard to source, and horribly hard to colour-match to existing joinery. And the paint schemes aren't very time-friendly either; try fiddly bevels and finials at any decent rate of knots. 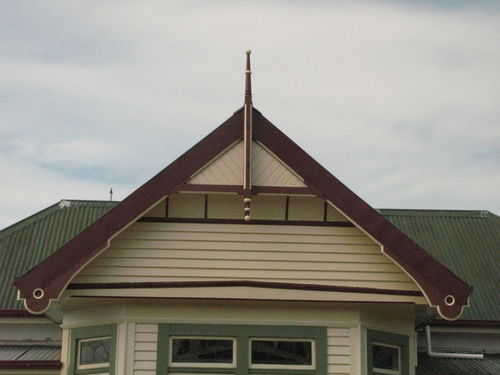 Above: It doesn't look that complicated, but there's a lot of work in merely painting this gable (photograph taken some time ago; I've finished most of the exterior now).

It turns out that if you don't want to glue the taps into the basins as the local plumbers do (which seems like a slightly bad idea to me), or tighten the hell out of backing nuts onto 100-plus-year-old porcelain, then you have to make your own adapters—and, even though that's a trivial job, it makes a minor task into a medium-sized pain in the neck. 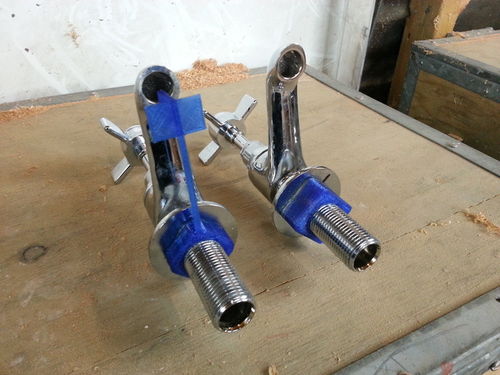 Above: The only benefit in making your own round-to-square adapters is that you can incorporate a snap-off alignment tool (left tap).

Then there are jobs such as tiling, which were carried out in a completely different manner in Edwardian times. Old-style tiles were laid very close together—without the large (and easy) grout lines of today. For the fireplace hearths, my plan was to reuse the original tiles that had been painstakingly removed by my friend, The Lovely Ian Dalziel™, and myself. Unfortunately, however, my plan turned out to be a bunch of complete crap. A few tiles had shattered on removal, and it turns out that you can't make broken tiles look like unbroken tiles no matter how hard you try. Too much entropy.

So you have to go through a tortuous process:

It all takes so much longer than it should. 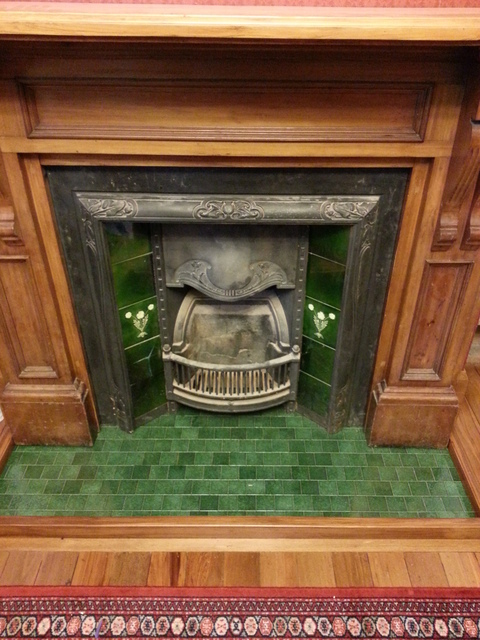 Above: The finished fireplace hearth actually does look very like the original.

I was, however, happy to spend a bit of time repairing the hall archway. When the house was split for relocation, half of the arch was removed, and then was somehow lost. In spite of great scepticism from my proper builder friends, I was able to remake half the arch so that it's impossible to tell where original ends and repair begins. Not that it's the most beautiful hall archway in the world or anything; but it's nice to keep original bits, I think. 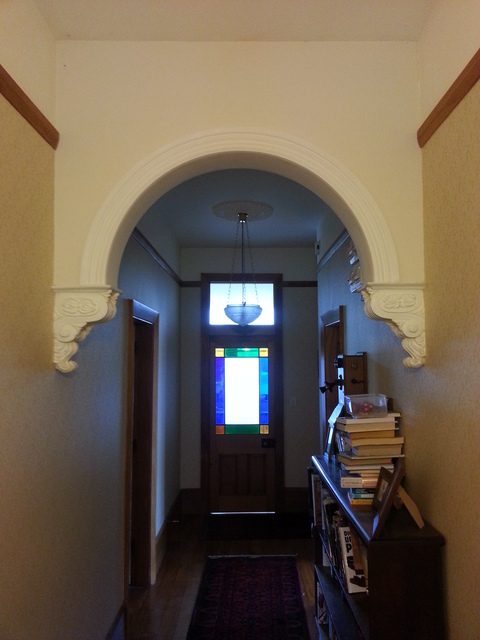 Above: The repaired (on left) hall archway. That reminds me—I still have to repaint the plasterwork.

Small things can sometimes be the most irritating. We were reminded of the non-existent towel rail in the lavatory every time we washed our hands. It should have been a five minute job—but I just couldn't find a sufficiently low-profile period rail to fit behind the door. It speaks volumes for Jennifer's good nature that she would spend a year drying her hands on the back of her trousers rather than (a) divorcing me, or (b) shouting: “Just buy a bloody modern towel rail from Bunnings.”

I had an unexpected breakthrough in the UK, when we visited a Victorian residence with exactly the same behind-the-door towel rail issue as our house. I surreptitiously snapped a photo with my phone. This was a major clue. 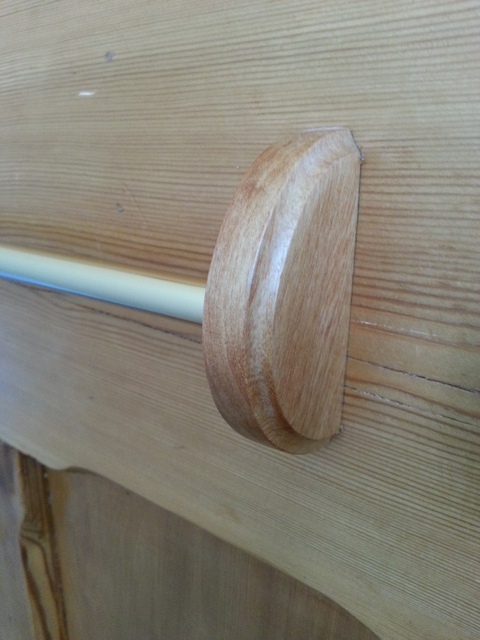 Above: The Victorian towel rail.

Back in New Zealand, a final futile search of Musgroves and The Pump House convinced me to swap my Saturday night for a lavatory towel rail. A few scraps of hundred-year-old rimu from an old schoolhouse provided timber that perfectly matched our lavatory door. 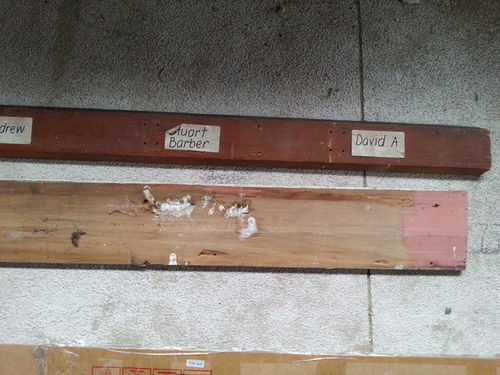 Above: Who were Andrew, Stuart Barber, and David A. What are they doing now?

An hour or so with the bandsaw, table router, and drill press gave me the rail-ends. The hidden brackets were made from bits of stainless steel oven trays. Isn't it lucky that I have a policy of not throwing out old oven trays? 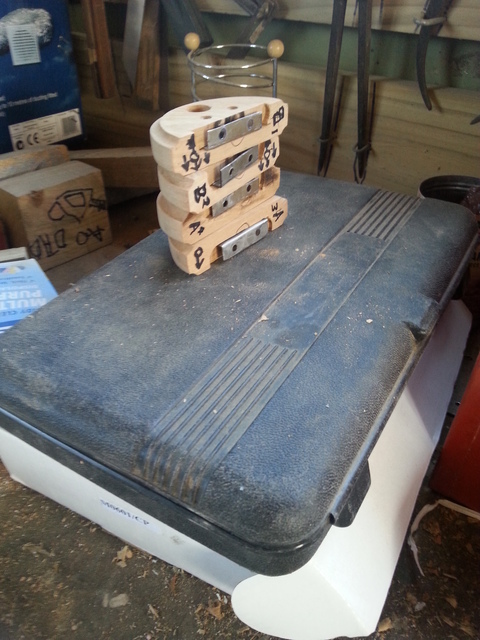 Above: Rail ends, hidden brackets, and a couple of spares. 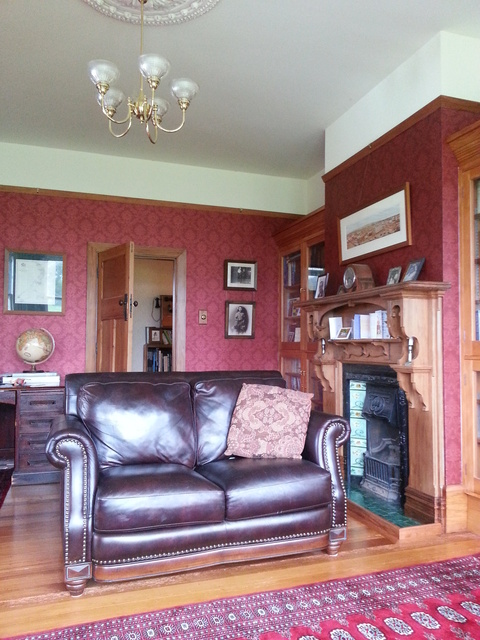 A few coats of my fancy varnish revealed that (as intended) the rimu is a perfect match for the lavatory door. 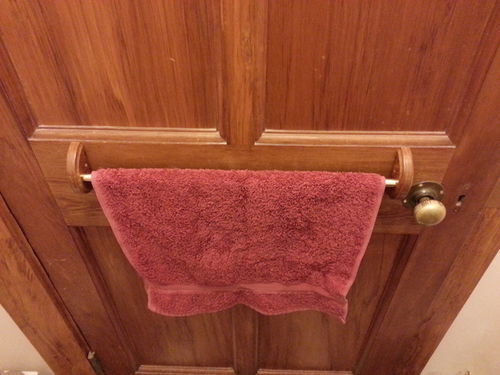 Above: The towel rail that saved my marriage (the angle of the photo makes the rail look a tight fit with the door handle, but actually there's a heap of room).

Sometimes, as I lie in bed at night, it occurs to me that this lavatory towel rail is a microcosm of the entire project.  A five-minute job expands into an evening's work.

Sure, by recycling bits and pieces, the towel rail didn't actually cost me any hard cash. Sure, it didn't take that long in absolute terms. But at the end of it you think: “I've just lavished three hours of my life making the perfect towel rail to fit behind a lavatory door. What the fuck is wrong with me?”

Multiply that five-minute-to-three-hour conversion rate by every job that I've done and you can see why I've become a grumpy old builder. Taken on their own, each task could be a fun wee project; taken together, they feel like infinity.

Another twenty items down my list is a whole stack of door joinery; remaking the cupboard doors that a previous owner replaced with pink MDF (while taunting me by leaving the rather nice rimu door frames). My grandfather—who recently announced his definitive retirement as a builder—has kindly shipped me his 1960s Tanner table-saw/buzzer as a helping hand. It's made in Penrose; it weighs 105 kilograms; it works about 2000 per cent better than my modern table-saw. 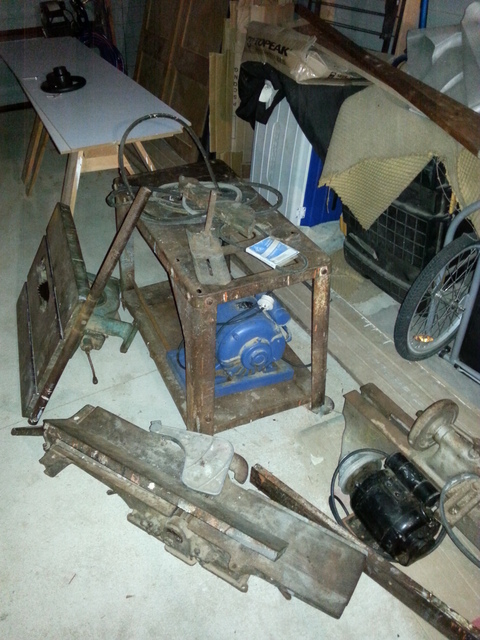 Above: The mighty Tanner arrives in Dunsandel.

I was particularly impressed by the beautiful condition of the Tanner's blade-guard, which apparently was only ever used when a safety inspector was due to make an appearance. It looks so very shiny and brand-new.

Life is a parabola, I suppose.