Peter Gutteridge changed my life. In December 1988 I came to Dunedin on holiday for a week from my hometown of Gisborne. I was eager to see some of the fabled Dunedin bands live and I couldn’t have timed it better – Snapper were playing that Friday and Saturday at the now long-gone Burgundy Bar.

It’d been an exciting week; I’d been writing for Alley Oop fanzine and it was exciting to finally meet in person the people that ran it, Jeff Ruston, Bruce Russell, Paul McKessar and friends of their like Lesley Paris.

That Friday afternoon I’d gone into Roy Colbert’s Records Records and even though we had yet to be introduced, he casually asked “Are you going to Snapper tonight?” I sure am, I said.

The Burgundy Bar was chocka both nights – and both nights Snapper played some of the most compelling, ferocious, down-right blow-yer-brains-out rock I’ve ever seen and heard. Peter sang and played guitar or keyboards, Christine Voice was on guitar and keys too, Dominic Stones also played guitar and Alan Haig laid down his metronomic drumbeats.

They were formidable – but to me they were also one of those bands where it had to be that line-up or not at all. Subsequent line-ups had their moments, but that original line-up really were phenomenal. It was drone-rock at its most uncompromising and thrilling – huge, pulsating riffs and waves of screeching, distorted guitars. Great, great, great stuff.

I took several photos during Friday’s gig and in the process had lost my lens-cap. Peter came up to me and politely, quietly said “I think this is yours” and handed the cap back to me.

I’d just turned 20 and after the gigs I found myself thinking “I need to come and live here.” A few months later I was and basically I’ve been part of the furniture here ever since.

The music, bands and songs will be Peter’s legacy – just a list of the bands he was in commands respect: The Clean, The Chills, The Great Unwashed, Snapper and solo.

Peter was only 17 when he played his first gig, in 1978, as a member of The Clean. In Garage fanzine #3 David Kilgour recalled that technically “Pete was at about the same level as me. We were so terrible we were an instant success and never looked back. I think we were probably different from yer average punk band in that we were trying to write music as good as the music we loved.”

That same year he came up with the riff for a song that is still one of that band’s finest songs, still a monster live – ‘Point That Thing (Somewhere Else)’.

Peter drifted away from The Clean then formed The Chills with Martin Phillipps in late 1980, but left them after only two gigs. He was then in short-lived bands like Craven A’s, before re-uniting with the Kilgour brothers in 1984 in The Great Unwashed. By now Peter was really starting to truly flourish creatively, contributing three of the five songs to the Great Unwashed’s Singles ep (originally two 7” singles, infamously packaged in far-too-tight paint-splattered plastic).

In Garage #6 (earlyish ’86) Peter says that he had piano lessons as a child “but that finally fucked out because I never used to practice.” (His sister Mary says Peter never actually had the lessons, but there was a piano in the house.) By Singles Peter had amassed enough songs to record an album himself, some of which would be recorded by Snapper, some on his Pure solo album.

Contrary to some perceptions, the classic ‘Born In The Wrong Time’ was not about himself but “about a neighbour, a neighbour who was a bit drunk all the time and kept turning on up at our flat at two o’clock in the morning and we’d have to ask him out the door cos we already had other people sleeping in the lounge.”

His final comment is incredibly revealing: “I’d like to make hypnotic music.” At which point, he did exactly that, excelling himself and making much of the best music he has left us.

“When I formed Snapper it was a deliberate reaction against the Dunedin Sound, I couldn’t fuckin’ stand it” he asserted to D Scene in late 2009.

By early 1987, things were looking ominous. In Alley Oop #1 Richard Langston reviewed a Snapper gig using phrases like “a relentless throb … the enormous keyboard sound must be like getting a crew-cut with a Masport … cathedrals of electricity … great swinging mass of harmonics … Gutteridge, who’s finally got a band to play his songs en masse clearly has a wider vision for this band.”

That wider vision would be perfected on 1988’s four song Snapper ep, one of the great – and there are many, many to choose from – Flying Nun EPs.

In Alley Oop #5 Peter described Snapper thus: “there’s not many bands doing anything as full-on or as rhythmic as us…I mean we aren’t disco and we aren’t a meaningful guitar-based rock band either, we’re a combination of all sorts of elements.”

Reviewing the EP in the same issue, his friend Chris Heazlewood was spot-on: “It’s a bit like a bath – drenching your entire body. Guitars and organ sharp, warm, fuzzy, drums celebrating the power of repetition … the recording captures the excitement of live performance…a well-defined noise wall … Alan Vega and Suicide might have taken you to the bridge but Snapper will push you off.”

The EP was Single Of The Week in the NME and played by John Peel. In early ’89 they supported Dinosaur Jr at the Powerstation in Auckland. Later that year, Dunedin cassette label Xpressway released what would be, so far, Peter’s only solo album, Pure.

As per usual, Richard Langston was on the money when he wrote in Alley Oop #7  in 1989: “… it shows the full range of Gutteridge’s talents, so besides raw over-loaded guitar-and-keyboard-fed- electro-boogie we get some stuff that treads with the melodic delicacy of your favourite moments from The Chills, yep that damn good…just bloody wonderful …”

Snapper’s debut album, Shotgun Blossom, came along in 1990. Amazingly, it was released by Edinburgh indie label Avalanche, thanks to their enthusiasm for Xpressway’s releases.

It might be over-shadowed by the EP, but Shotgun Blossom is a superb album, ten songs of that massive hypnotic Snapper groove. At the time, a lot of us here in Dunedin were just pleased that it existed at all. I distinctly remember a pleased-as-punch Peter coming into Radio One to show us the white label pre-release; I distinctly remember thinking “yes, there is a Snapper album” and being stoked that such a thing was going to exist.

Even the Brits liked it. Melody Maker called it “a solid-gone, stone-cold, down-under classic.”

But unfortunately a bit of rain was starting to fall in Peter’s life. The original Snapper line-up was slowly falling apart. In the 2009 D Scene article, he also asserts, rightly or wrongly, that Flying Nun ignored Snapper and chose to concentrate on Straitjacket Fits, thus failing to build their reputation as well.

More significantly, Peter had started to use opiates. This was an open secret in the Dunedin music scene. Either way, his health also took a dive. He walked with a stick, to manage a limp from having one leg shorter than the other which had caused him pain since his teens.

Snapper would continue in name until 1995, when the patchy at best second and final album, ADM, was released, on Flying Nun. His solo gigs were few and far between by now, even fewer into the 2000s. He still mucked around with instruments at home, but rarely ventured out to do gigs. Notably, however, he was now mainly playing electric piano, not guitar, if he did do a gig.

After living in central Dunedin for some years, Peter moved up to the North-East Valley in the late 2000s. He was closer to friends, but his health was still rough.

Things eventually started to improve a few years’ ago. His songs had started to have an impact not just locally, but in the USA, too, where the likes of Wooden Shjips and Real Estate were recording covers of Snapper songs.

In early 2012, Peter at last got into better shape. One day I was biking along George St and couldn’t believe how sprightly and healthy he looked. He’d kicked the methadone, his skin looked good, he just seemed to have bounced back. He had also finally started wearing orthotics to correct his limp. The gigs started happening again, too. Since then, Peter probably played more gigs than he had in the previous 15-plus years combined.

I saw Snapper last year a couple of times; Peter, Dominic and a young drummer and keyboardist. It was, it must be said, a hell of a lot better than what I thought it might’ve been. While it didn’t blow me away, that’s only because I knew what to expect. But the songs still rumbled and belted along powerfully and Peter himself played and sung with depth, passion and fire. I was pleasantly surprised; it was great to see that “The Gutman” – as he’d ubiquitously became known – still had it.

Then another miracle happened – Pure was re-issued at last. For years it had been pretty much the only Xpressway item never re-issued on CD and / or LP. For decades it had languished in obscurity, a legendary cassette destined to exist merely as a memory, an object, in a useless, by-gone format.

But then a weird rumour started going around town – some US label was going to re-issue it. To which the standard response was “I’ll believe it when I see it.” But then the Snapper EP was re-issued to acclaim, so we started to think that maybe, just maybe…

So it came to pass that New York indie 540 put it out as a two LP set last year. They still don’t know how thankful we are to them. I’m just glad that Peter had a hand in it, with considerable pushing along by David Kilgour.

It sounds great, of course. I’d also forgotten that the liner notes say “…there’s at least as much again currently recorded, and more going down all the time – so look out for vol.2!”

Peter’s legacy is his music, so if more of it can be released, even all these years’ later, so many people would appreciate it.

The last time I spoke to Peter was in late June, one Friday evening at St Paul’s cathederal in the Octagon at an improv music gig (very progressive church, is St Paul’s). He sat next to me and was in good form. We talked shop about music. He also told me that he was pleased that our mutual friend Beris’s daughter, Sersha, was such a kind, good-natured girl. He just seemed pleased that there was hope for the future, if good people like her were going to grow up in it.

The last time I saw him, appropriately enough, was at gig by fellow Flying Nun veterans the Terminals, at Chick’s Hotel a month or so ago. I didn’t get the chance to talk, but it was great to see him still out and about.

A week or so later, he was in New York City. He saw some sights, caught up with some friends, even did a gig. He must’ve loved it.

I got a shock when I read on Facebook yesterday morning that he’d passed away at Auckland Hospital.

A lot of people here in Dunedin are going to miss Peter. So will many around the country and some overseas. Peter was not perfect; god knows he could be bloody exasperating. Sometimes he was just plain baffling. But I’m very, very pleased I knew him. There are dozens of anecdotes about Peter, we’ll all enjoy sharing them over the next few weeks.

There are some quite stunning songs he has left behind. Pick out one or several of your faves and blast it really, really loud. 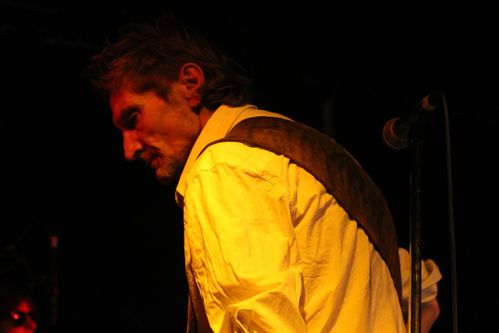