I've been playing with the New Zealand Electoral Survey data for the 2011 election and what interests me more than arguments about voters and parties and alliances is what we can see in the data about why people vote, and what the data points to as what we as individuals can do about the declining voting rate.

Looking through the Election Survey data, you can ask the computer to build a model of important predictors of voting. Then you spend a while going “no, don’t use that variable” and redoing the model (then repeating the excluding of variables).

There were a number of reasons I was removing variables – for example, that they were too specific to a party to be of general use. (As a technical note, this is just playing with the survey results themselves, without working through the weightings to make them representative of the general population.)

Early on in the process, the computer recommended that, in 2011, liking Phil Goff was a strong predictor of voting. 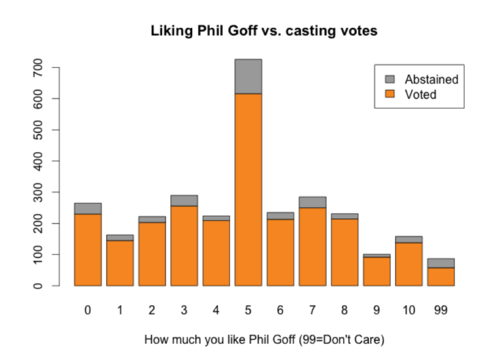 What was important was not that you liked Phil Goff, it was having any opinion at all. Do know (99) matched to a 66% likelihood to vote, while having any other opinion at all matched to between 85% (right in the middle, so knowing you neither like nor dislike vote) and 93% for the highest voter turnout. What it was saying is that having an interest in politics is important – it was just saying it in a way that was party specific, and I didn’t want that party based view.

It also told me age was important, which I also discarded. 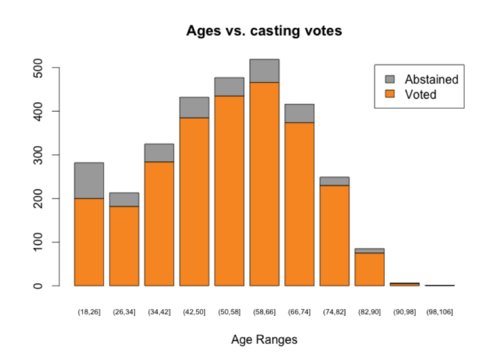 Basically, the 18-26 year olds (as I divide it up in this graph) are not-voting at about twice the rate of the next cohort. But age is not something you can do anything about, so it is not actually use for guiding individual behavior (at a government level, the voting age could be lowered and students enrolled at school, but that is not an individual action).

Another thing that it showed, and I discarded, was going to church. 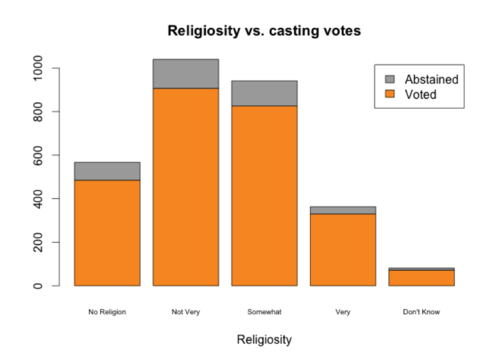 While there is a 14% non-voting rate among those declaring No religion, and a 9% non-vote rate among those declaring themselves Very Religious, telling people to get a religion to increase the voting rate is a non-starter. Anyway, I suspect it is putting the cart before the horse, as other concepts tied in with “dutifulness” have shown up as well.

So, after checking, and discarding 35 or so variables, what the computer was suggesting to me was a fairly straightforward model. 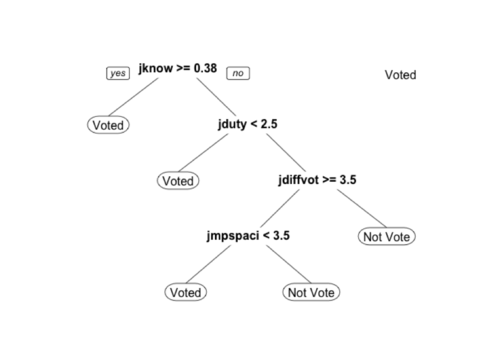 Let's go through what the variables are and what it means in terms of actions people can actually take.

jknow  is top of the list, and is "Political Knowledge Scale". It is representative of all of the “knowing things about politics” measures. 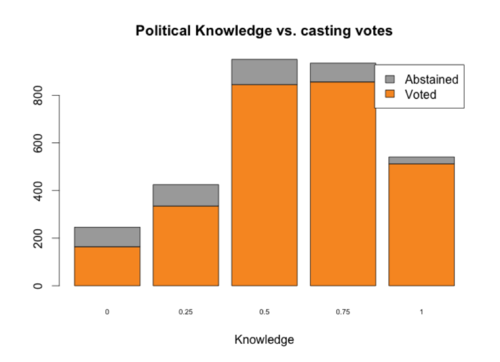 While it is not wonderfully clear in a bar graph, there is a steady progression in political knowledge and voting. 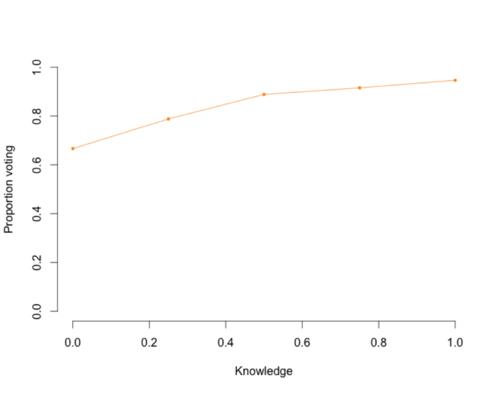 So, the single biggest thing people can do, acting in a private capacity, is increase other people's knowledge of politics. If, through talking to them, you increase their knowledge of politics from 0 to 0.5 (nothing to half informed) you increase their chance of voting from 67% to 89%, and they are a more informed voter (but that is more about how they are voting than participating in the process).

I think this is what was behind discarded variables like “Liking Phil Goff”. If you have enough knowledge of politics to form an opinion about the then leader of the main opposition party, you were highly likely to vote.

jduty is the response to the proposition “it is a citizen's duty to vote”: 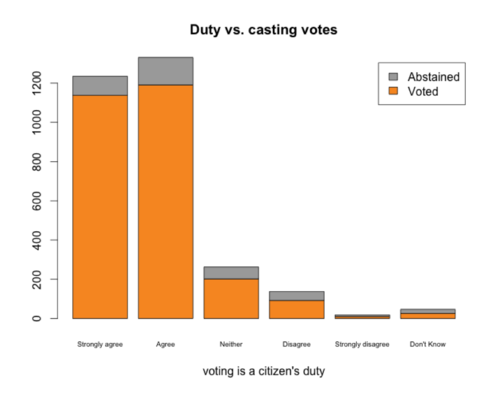 Rendered as a line plot of the proportions this looks like: 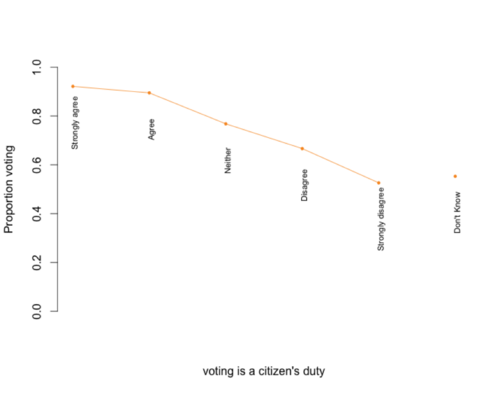 This initially seems not something we can do much about in a liberal democracy, without resorting to clichés like “Make young people do national service” (or, indeed, as an entire generation missed it, “Make everyone do national service”) and maybe in a hand-wavy unexplained way they will get a sense of duty.

But I want to make the point that the duty criteria is applying to people who slip past the knowledge one – so knowledge trumps duty. Now, they may be interlinked (I haven’t explored that) and knowledge could lead to a feeling of duty, but regardless, duty doesn’t matter if people have enough knowledge to vote.

I also suspect that this ties in with variables like religiosity – people who are dutiful about attending church bring that duty to the voting process, regardless of political knowledge.

There are plenty of other posts that could also be made about increasing people's sense of duty/care for society/involvement in society, but you won’t find that data in the Election Survey. The practical step is to increase knowledge (talk to people).

Jdiffvot is short for jdiffvoting and is based on the question “does voting make any difference to what happens?”, so is very much in the engagement/enthusiasm/knowledge area. 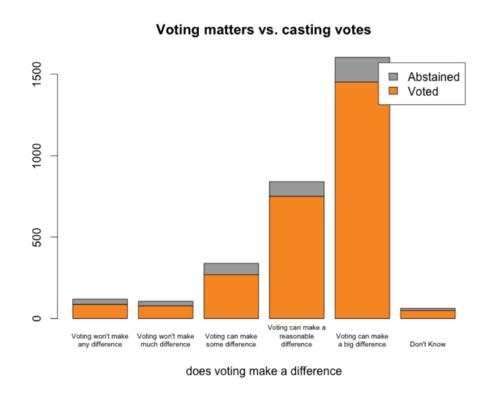 This is a rising pattern with not a lot of difference between extreme and mild answers. 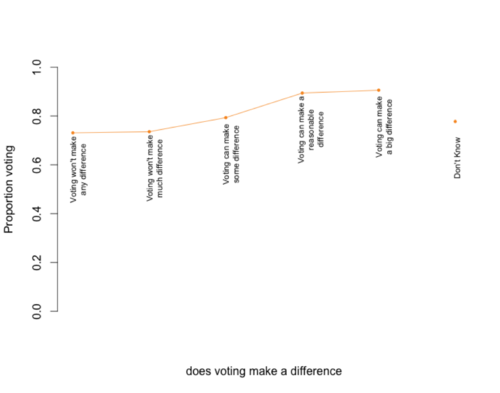 Now actual disengagement/rejection of the political process is a hard one for individuals to do much about (parties can clearly offer alternatives and carry them out), but this does only kick in for those who aren’t voting due to knowledge or duty, so it is making less of a difference.

jmpspaci is short for jmpspacific, the question that asks “how many Pacific MPs should there be?” 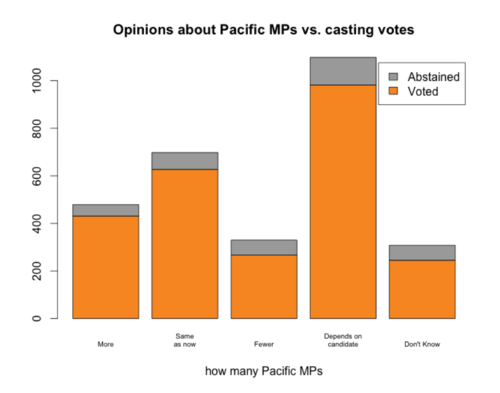 This sounds like a hot-button topic, but bear with me on this. The actual percentages are: 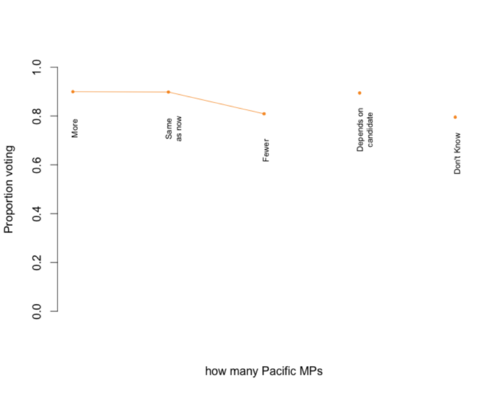 There are two groups not-voting here – the Don’t Know, and the Fewer. The “Don’t Know” can be fixed way up the chain in the political knowledge section. And as for the “Fewer”…

Well, to be honest, if someone who doesn’t know much about politics and doesn’t feel it is a duty to vote, feels that voting can make a difference, and feels (despite having a low political knowledge) that there should be fewer Pacific Island MPs, I personally am not that motivated in finding a way to get them to vote.

Now, there are other groups where things effect voting – for example English language fluency, but in terms of a simple model that makes the most difference the computer recommended this one (which suggests that those groups are smaller in number and their needs are more specific). While a different exercise could be conducted to find a set of needs and independent interventions. A quick easy thing you can do, if you want to increase election turnout is talk politics- at the hairdresser, in the supermarket, on the bus or train. The question is, do people want to increase turnout enough to do that?

Finally, in a show your working kind of way, if anyone wants to review my R code, it is here on Github.