I'm not sure what theme FIFA was hoping to emphasise at the is world cup, I'll bet good money that it wasn't "villainy".

Almost as soon as the knock-out stages started the bad guys started their evil works. Perhaps even before then.

Obviously FIFA itself is evil, like the worldwide sporting branch of SMERSH, but that usually doesn't translate directly onto the field. With this in mind, I offer you: The World Cup of Evil!

Making my life easier, I'm going to start with the round of 16. This means I don't get to include Cristiano Ronaldo. So before I kick off (see what I did there?) I'd like to make a quick mention of the Portuguese striker.

From what I understand, the English really don't like Cristiano Ronaldo, FIFA's player of the year. But they seem to not like him in the same way they don't like huge binging nights out drinking. They publically scorn him, then chuckle quietly remembering all the cool things he does.

His main issue seems to be diving, which he does at a rate that looks similar to other players. (Portugal in general has a similar time taken per "fake injury" as England in the graph below that I made from WSJ data). 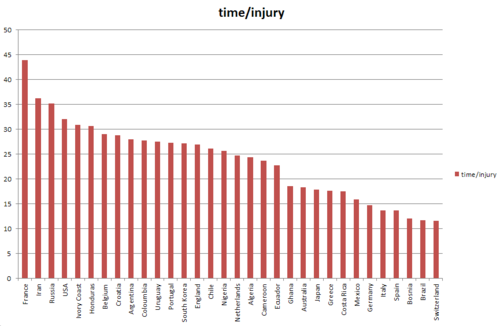 Let's be honest, it's probably this though.

While I don't particularly think the Brazilians are evil, the Chileans are just so damn nice!

Yeah he wasn't playing, but Uruguay has a guy who bit another guy! Then they complained that FIFA didn't let him play any more, suggesting instead to just wheel him on the field like this.

No ones really complaining much about these teams so France wins a scoreless draw because they take so much time when they draw penalties.

It was once said "Nobody who speaks German could be evil" and I'd like to believe that. But the Algerian goalkeeper was just so damn cool, that I can't let them keep going in the evil tournament.

Robben, admits diving in the game against Mexico, then says: "In recent days there has been a lot of talk about diving and actually I’m tired of this bullshit." I don't think that's how it works after you admit something. "I'm really tired of every talking about me shooting someone after I admitted I shot someone."

(I can't see too much anger aimed at these teams so I'm just going to flat out ignore this whole arm of the bracket and assume the USA makes it to the semifinals simply for teasing a whole lot of fans who otherwise couldn't care less about football.)

So not only did Suarez bite the Italian guy, he's bitten a bunch of other people and may be racist. No matter how silly Neymar and friends act, they have yet to place part of another person in their mouths with intent to injure. And even after he bites the Italian, Suarez falls to the ground holding his mouth seemingly to claim he had been fouled.

You know what, let's just skip to:

A packed stadium holds it breath in anticipation for:

The Netherlands play the entire game while lying on the ground should an Uruguayan player near them. While left alone though, the Dutch play with pure skill and excitement, causing fans to truly believe that this is a good team and not, as it turns out, terrible, awful people.

In the meantime Uruguay, continually annoyed at giving away penalties to the Dutch, continue their simple game plan of "get the ball to Suarez" (as this is the evil World Cup, he hasn't been banned, but will instead win the Golden Boot.) Should Suarez be sent off, the Uruguayan team will pack a collective sad, but he won't be today.

Instead he launches face first at Robben during a corner, jaws open wide. Sadly he misses completely, causing Robben to fall and be awarded a free kick.

All fiction aside though, it's quite odd watching these games and watching so many of the players diving. Especially when you see that players, like Neymar, actually getting quite badly injured. I get the fall down if you're tripped thing, because maybe the ref doesn't see it, but to then writhe as though your body is aflame, is so bizarre.