I love the National's Library's Papers Past archive. I've used it many times for work and sometimes just for fun. The one thing I never thought I'd be able to do is vanity-search on it. And yet, here it is: the text and pages of Rip It Up, from 1977 to 1985, on Papers Past.

Those dates are significant in a couple of ways. It's by far the most recent commercial publication in the archive – you have to go back to to a handful of newspapers that ceased publishing in 1950 for the next one.

The other significance is personal to me: I arrived at the Rip It Up office in January 1983 as an up-for-it 20 year-old delighted to be free of my long year at the Timaru branch office of the Christchurch Star and, really, free of working in a straight newsroom. I would go on, as deputy editor, to write a fair portion of every issue of the mag, every month until May 1986.

So to that extent, this rescued Rip It Up is not only a history of us, but a history of me. I've known the project was in the works for a long time, but this fact didn't really hit me until I set down at the weekend to use my preview login, did my vanity search, and got a bit weepy.

It's all there, including my the very first thing I wrote for Rip It Up, in May 1982:

Whatever else they may be, the Clean are not entertainers.

The Clean do not court favour. They are not sluts.

The Clean play pop music without smiling. The Clean don't like you. Why should they? They don't even know you.

They add-libbed ferociously, people danced and it was a hell of a lot of fun. Great boys, great. Whatever else they may be, the Clean are honest.

The Dance Exponents are entertainers. They arrived, set up and the speeding began. The pace of the show was breathtaking

Jordan Luck is a face. So are all the others. In fact, we're all faces. Yippee!

Rock and roll cliches – Jordan's "cockney" accent, sits under them like platform heels. They could step down from them and still be the Dance Exponents.

The songs? I'm told they're quite good. Whatever else they may be, the Dance Exponents are gonna be stars.

The Agriculture students drank a lot of beer.

It's a little ambitious style-wise – and there's quite a bit of that later in the archive. I was experimenting in the terms I'd learned from avidly reading NME for the preceding five years. Some of it makes me cringe a a bit now (or at least think that kid could have used a good sub), but I was stretching out and learning my boundaries and I'll always be grateful to Murray Cammick for giving me the room to do that.

After that review, Murray wrote back and observed that this wasn't the usual style for live reviews in Rip It Up, but I should feel free to keep contributing. The course of my life essentially changed from that point. By November I had applied for the new role of deputy editor (thanks to Debbie Harwood, then managing the Dance Exponents – I bumped into her one night at the Hillsborough and she told me Murray was hoping I'd apply, so I did). And in the new year I arrived in Auckland to a new life, working bang in the middle of the culture I identified with.

By then I'd written my first Rip It Up feature – an interview with Hunters and Collectors in Christchurch (exploring new styles again, but it pretty much works). In the February issue, there's the Siouxsie and the Banshees story, which includes a chat with their guitarist, a Mr Robert Smith, who explains that 'Let's Go to Bed' was meant to be a solo release and the record company put it out as a Cure single without his permission. Before the year was out, I'd duelled with John Cale and gone up to the Big I, where Malcolm McLaren was staying, and persuaded him (he didn't take much persuading) to give me an amazing interview.

Compared to the cadet reporter's life I'd left behind, it was wild and fulfilling. Rip It Up – 30,000 copies nationwide every month – was read by everyone, the centre of the scene. And I was part of it.

The following year I'm covering the show Split Enz put on for Te Awamutu's centenary and reviewing 'Pink Frost' on release (I had forgotten quite how many reviews I wrote), then going on tour with Motorhead. There are also interviews with Martin Phillipps and the Doublehappys (page one and page two).

There's plenty that I'd forgotten writing: like this recent-history look at post-punk Christchurch from 1985, which is full of things I'd forgotten doing and even things which may have escaped later histories.

And then there are the letters. In those pre-internet days, the Rip It Up letters column was a roiling, often creative place. The readers told us what they thought, as Hoss from St Heliers does here:

Your publication of the Doublehappys’ inane insults in reply to what was probably a genuine musical criticism I reckon is a form of editorial name-dropping. I think there are too many poseurs about wanting to become "personalities" with their names or faces in RIU without the music to back it up. I mean, what' do these people have to offer the man in the street (or pub, for that matter)? I don't want to read about the last party Russell Brown saw a few ex-Blams at or Jordan Luck’s fringe or Andrew Fagan's biceps. These things are irrelevant and boring. More live reviews, band files, letters, please.

They also told us when they liked us, as Charmaine Stewart of Wellington did here:

Your magazine seems to better itself with each new edition. I find nothing better than a hot bath, stretched out with a corned beef and hot English mustard sandwich in one hand a copy of RIU in the other. You should try it: it's a very satisfying experience.

I'd also forgotten the merry letters we used to get from Eric Android and Baine Huggett, in prison. If you wrote a letter to Rip It Up up till 1985, you can search for your own name and it'll be there. Unless, of course, you've forgotten the clever pseudonym you used at the time ...

One letter that's not there – in my memory, Murray published it, but evidently not – is one I wrote, in late 1981. I was one of those haughty correspondents telling Rip It Up what was what and that it was nothing more than "a paid advertisement for the music industry". When I sent in my first review six months later, Murray recognised my formatting and the imprint of my typewriter. He still ran my review and wrote to me inviting more. 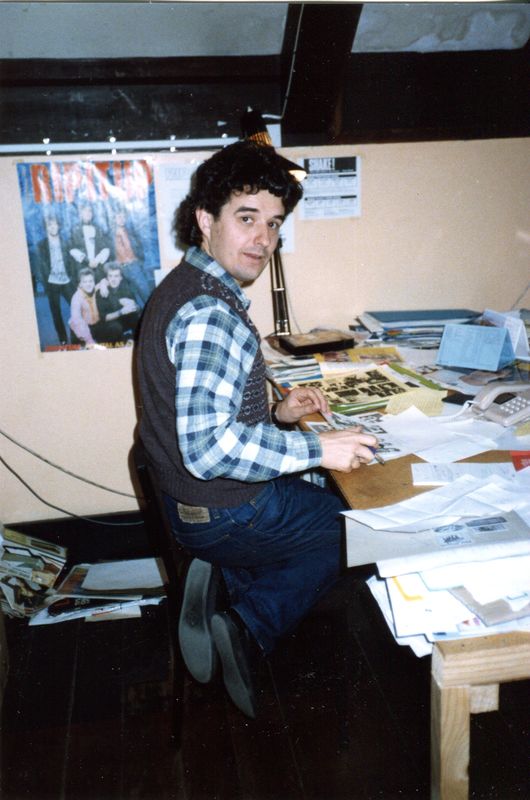 You may be wondering how this wonderful project came to be. How did Rip It Up's increasingly lacklustre later life under different owners produce this? Thank Simon Grigg. Simon bought the Rip It Up archive a couple of years ago and started talking to the National Library not long after. He did it, he tells me, for Murray – but we all get to benefit from it.

A lot of people have put in a lot of work since to make this happen; not least Audioculture editor (and former Rip It Up editor) Chris Bourke. This is an Audioculture partnership and I'm very proud of that too.

It should be noted that Rip It Up has provided some challenges for the National Library team. You'll notice that the original page images aren't in crisp black and white, but greyscale – a trade-off to preserve the photographs.

Rip It Up's layout also defeated the library's OCR system at times. Text is jumbled in some of the clippings – my coverage of the Queen Street riot, from December 1984, is all over the place – but you can always just go to the whole page view.

If you want to get to the page from a clip you've searched for, go to the "Research info" box at the top of the item and get the permalink – paste that in and you'll see the same clip, but with a "Back to page" link you can click to go directly to the whole page.

Anyway, here it is. Go wild. Do feel free to share the stuff you find (use those permalinks rather than the search URL) in the comments below.