“So tell me, someone that's known him your whole life, who was Barnaby Jack?”

It's a question I've been asked countless times by countless reporters over the past few months. It should be the easiest of all questions I've been asked about my brother, but it's the one I find the toughest to answer.

Every time, though, that someone's asked it, I find myself thinking of a chat we had about a year ago about work, relationships and life in general.

“Honestly, I'm okay at stuff,” he wrote about his job.

“I just picked a field and got in early.”

That's who my brother was.

He was one of the smartest people I've ever met. A genius. He was a pioneer in the computer security field. He was a rock star with “fans” in every corner of the world. He spent his days saving potential lives.

But none of that ever changed him. He was successful while remaining as humble as they came. He'd be stoked to see how much his work meant to so many people. But he'd also be embarrassed by the media frenzy that hit when he passed away.

“By the way,” he'd asked later, as we discussed a presentation he'd be preparing for, “You know how you can make food colouring not drop to the bottom of a glass of water?”

It was just over two months ago that my mother lost her son. That I lost my brother and that the world lost a genius. A genius who spent his days literally saving potential lives, without ever having studied medicine, and most every day people never knew what he was up to.

The computer world, however, mourned the loss of Barnaby Jack publicly, to a point that I lost count of how many tweets, messages and emails I received from people I had never heard of, telling me how much they admired my brother.

I'll never forget the moment I found out, and the physical pain of being told that Barnes was gone. He's always been invincible to me. Somebody so brilliant yet so genuine would be around forever. It would be too cruel for him not to be.

I always knew he was brilliant. And I always knew that what he did was big. But I never completely understood how brilliant. Or how big. That was until he died and that fact was the number one most read story on BBC the next day as well as countless other news websites, radio and TV.

He was meant to be in the news the weeks after he died. He was due to talk at a  hacking conference in Vegas about pacemakers and their vulnerability to hacking. It was a huge deal. People were anticipating it. Especially after his earlier exploits with ATM machines and insulin pumps. We knew it and so did he. I'd spoken to him numerous times about his talk, the preparation he was putting into it, and just how big a story this could be.

He never liked to admit it, though. He was always more proud of me and my comparatively minor achievements.

To him, that was always so much bigger. Because I was his little sister.

He was my brother, and he was my hero.

I always thought my best trait was the fact that I was Barnaby Jack's sister.

I think the reason it's so hard to explain who my brother was is simply because he was so many things. And so much more than the insanely brilliant hacker who could empty an ATM of its contents from a laptop or find security vulnerabilities in medical devices designed to save lives. He was more than the member of the 'elite hacking group' that was hired to hack into cars, even though he never bothered learning how to drive one himself.

Barnaby was my best friend from the moment I was born. My idol and my protector who achieved so much but always made it clear that the moments he really felt happy were the days he knew his family was doing well.

Barnaby was a guy who traveled the world, making friends and fans everywhere he went and was literally changing the medical world while he was at it, but he never lost touch with his family and friends back home. He lived on the other side of the planet, but we'd email most days, often multiple times a day, chatting for hours on end.

Barnaby was the guy who didn't think twice about putting his career on hold to stay in New Zealand and be here while our father was dying years ago.

He was the guy who didn't hesitate to take on the role of Dad as well as protective older brother when I needed him to.

He was the guy who would treat total strangers like old friends, because he would simply assume that at some point in the future that's exactly what they'd be.

That's why he made such an impact in so many corners of the world. He was the guy you'd spend one night interacting with and would never forget. He had an absolute love of life and fun, and that love was infectious.

Barnes was the kind of guy who loved to be around people. As long as they were genuine. He had no time for posers or false sincerities.

I've lost count of the number of times I've been asked when the fascination for computers emerged -- and while he was pretty young, I honestly can't remember. He'd always been fascinated, however, by how things work and the idea that with a bit of tinkering, things may be able to work that little bit better.

I remember experiments with chemistry sets and Lego. I remember allowing him to remove the heads and limbs of various Barbie dolls then having to invent various injuries to account for the fact they never made it back to me in one piece. I remember trying to imitate his skill with building intricate model planes and boats, only to find I didn't have either the skill or patience to make them work.

I remember, as kids, sitting up with him long after we were supposed to be asleep, listening to his plans for various adventures or games that we could invent and play.

I remember being told all about birthday presents he'd bought me that he didn't want to wait to surprise me with, or convincing me to unwrap all my Christmas presents when he did the same to his, one Christmas Eve, or sitting up all night with him so that he could prove to me that Santa was, in fact, a made-up character. I remember knowing at the time, as well, that none of these things were done out of cruelty, but simply because he wanted me as his sidekick for all of the above, because nothing's ever as much fun or exciting without someone by your side to share it with.

I idolised him from day one. And I was lucky in that I never felt like I was tagging along. He always dragged me along for adventures with his mates – and I always happy followed. To me he could do no wrong and the second he started making waves with computers I knew he was destined for big things. Maybe all sisters say that. Maybe it's our job to believe such things. I don't know.

Barnes was never short of crowds of people around because he had a real talent for lighting up a room when he entered. I have photos of him as a kid, surrounded by girls obviously hanging on his every word. It was the same as he got older. Barnes would walk in a room and people would follow him. Because the day or night would be more entertaining, more exciting, just more fun, if Barnes was there.

The day after he died a friend suggested to me that I literally write down every piece of advice that Barnaby gave me that I could remember. That at some stage it would all come in handy. It would be like he's almost there, giving me advice again. I've been doing it and it's true, I'm glad I now have a notebook of tidbits of awesome to scroll through when I need it.

He had a knack for giving advice without ever making it sound like that's what he was doing.

“In my opinion,” he told me once during one of our online chat marathons, “having integrity in what you do, and the respect from those that YOU respect – that's when you can say you've 'made it'.”

And going by that advice, it's pretty safe to say my brother “made it”. Not just in work, but in life as a whole.

And I couldn't be more proud.

Which is basically a long-winded way of finding an answer to the question I mentioned earlier.

Who was Barnaby Jack?

Barnaby Jack was my big brother.

And I'll be forever grateful for that. 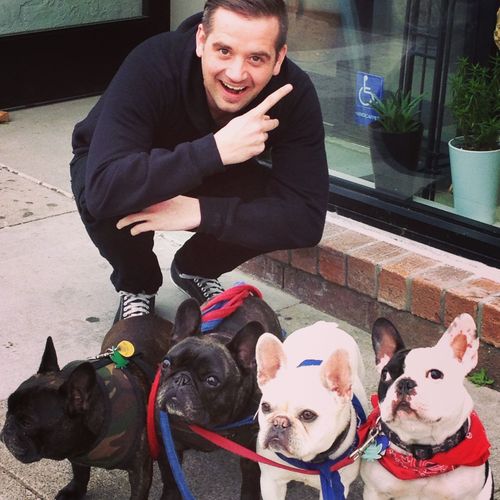